• 'Courage is a spiritual virtue' - the sermon

• Video of ordination and installation 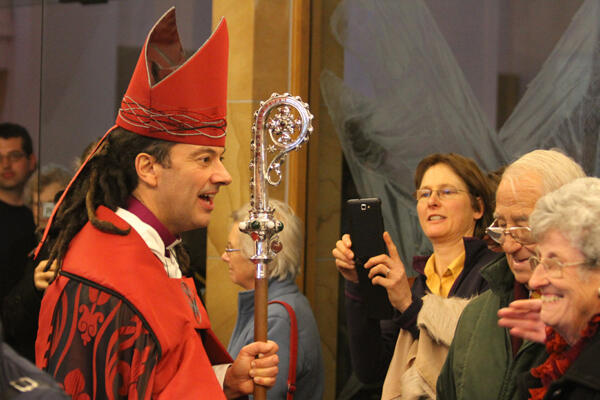 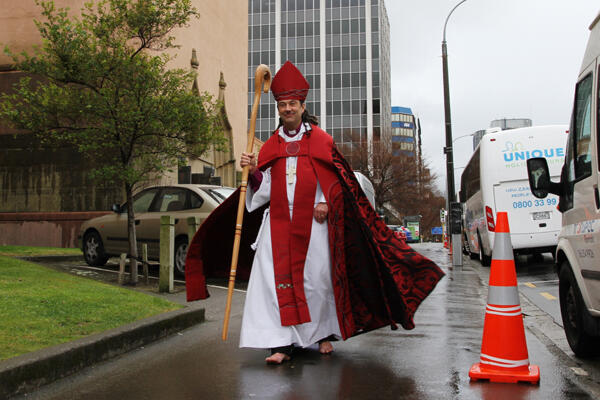 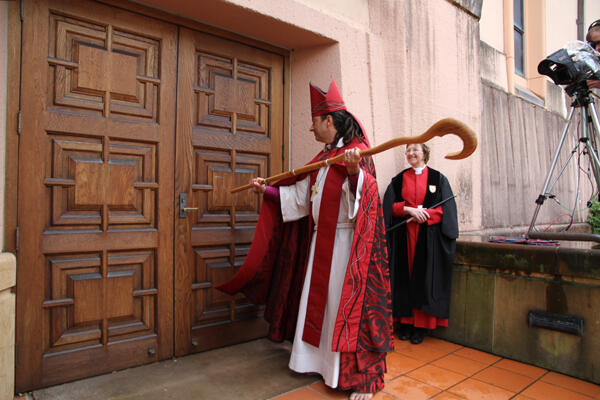 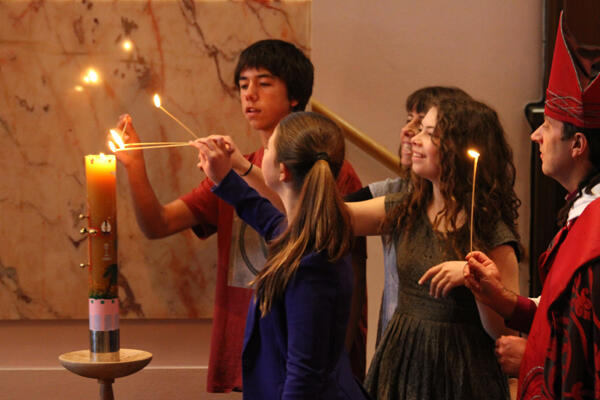 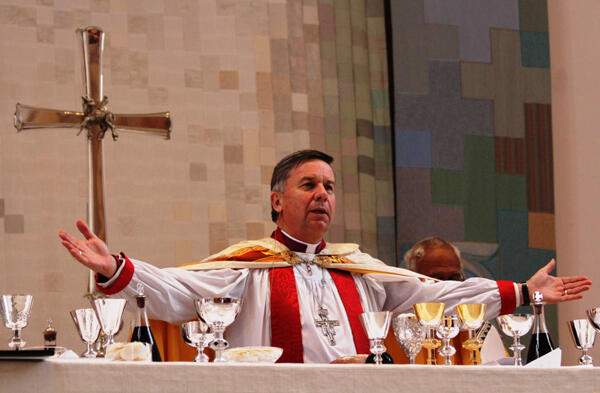 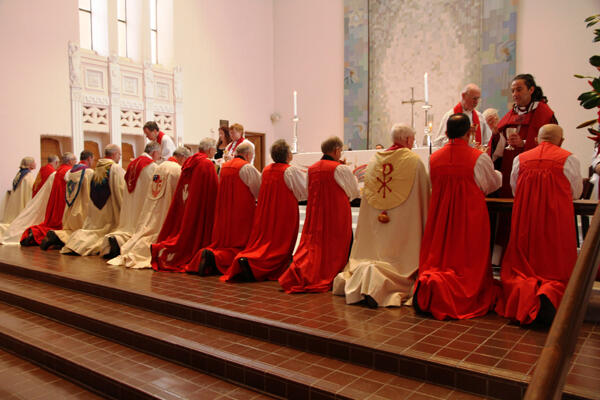 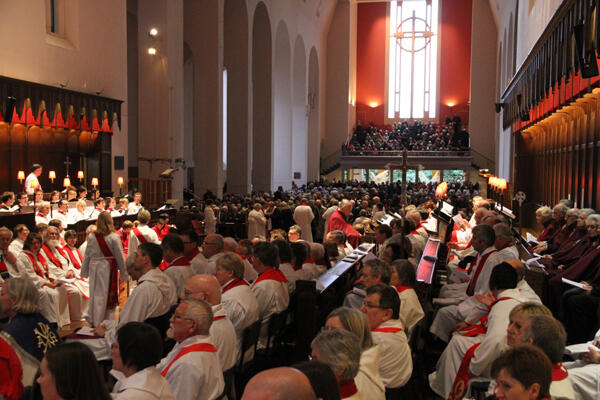 It’s a mystery how a man who likes to mix with convicted criminals, who commends a life of slavery, who walks barefoot into cathedrals in the middle of winter could be so... well, so downright popular.

Yet there’s no mistaking just how enthusiastic Wellingtonians are for such a man.

Because 2000 of them shoehorned into the Cathedral of St Paul on Saturday to see Justin Duckworth ordained and installed as Wellington's 11th Anglican Bishop.

There were so many in the congregation, in fact, that it’s as well the Fire Department didn’t see them standing in the aisles, and against the walls.

And when, moments after the gathered bishops had laid hands on Justin, and prayed the prayer of ordination, and Bishop Justin was presented to the people… well, that was the cue for a thunderous and prolonged ovation.

But the thing about Justin Duckworth is that there is no mystery about him.

No mystery about what he's always stood for, and what he will continue to live by now that he's a bishop.

Carved into the Pastoral Staff he was given on Friday by inmates at Rimutaka Prison are three marks which indicate the core values of Urban Vision, the movement Justin and his wife Jenny helped found 25 years ago, and which anchor him still.

Those strands are: having a Jesus centre, belonging deeply together – and giving our best for the least.

Justin told the cathedral congregation that he was thinking about those who couldn't be with them today – and he told the congregation of a wero(Maori challenge) that those inmates, who are in the faith-based unit at Rimutaka, had laid upon him:

Please, never forget us. We need you to stand up for us, and to stay faithful to those of us who need you most.

Healing the scars of slavery

The assembled robed clergy of the diocese heard a variation on that theme in the 15 minutes before they processed into the cathedral.

Justin gathered them in The Loaves and Fishes, the café next door to the cathedral, and talked about the year he’d spent as Priest-in-Charge of a London parish in 2007.

They met a Christian then whose life purpose was to heal the scars left by slavery.

He’d inspire groups of English and Africans to walk from city to city to show those wounds are still real – and he made that a walk a headturner. Because this time, it was the white people who walked in chains and yokes.

Justin walked from Birmingham to Liverpool that way, chained to his children, and he told the clergy yesterday that he’d found that experience “profoundly disturbing”.

Yet that, he suggested, was the life that each robed person in that room had volunteered for.

“Jesus leads a triumphal procession of slaves,” he said. “We are the ones who chooseto be slaves, yoked together.”

'Walk with us in Jesus' footsteps'

So those who choose to be slaves for the Gospel duly processed into the cathedral, with Justin and his wider family, and about 140 members of the Urban Vision family taking up the rearguard – called on by the karanga of Putiputi Mackey, and responding with: Come with us, walk with us, in the footsteps of Jesus, a Taize-style chant composed by one of their number, Gemma Minogue.

The Rev Martin and Alison Robinson – who co-founded Urban Vision with Justin and Jenny, and who are chaplains at Rimutaka Prison – then preached the sermon.

Alison began by telling a rabbinic tale in which a prince dreamed of creating a community where everybody cared for their neighbour, even at cost to self.

He invited chiefs of the various clans to celebrate that visionary community-to-be by selecting the best wine in their cellars, and emptying that into a communal vat.

But each chief was suspicious. And so each emptied into that vat bottles, not of vintage wine, but of water.

“I understand,” said Alison, “the resistance to doing something so foolish and extreme.”

Yet many of the decisions Justin and Jenny had taken over the years seemed almost ridiculous at the time. But they had been taken simply to attempt to walk authentically in the footsteps of Jesus.

One example of Justin’s gift for dreaming the impossible, she said, was his driving Urban Vision to launch community musicals, with casts composed mostly of strugglers from the neighbourhoods in which Urban Vision serves.

And so Joseph and the Technicolour Dreamcoat, then Jesus Christ Superstar,then Oliver – which had a cast of about 30 kids from ten different ethnic backgrounds – were brought to the stage. Each show being bigger and more ambitious than the last.

“In some sense,” mused Alison, “we are embarking on the next musical.

“The cast is just a little bigger this time.”

From the known to the unknown

Later in the service, after Justin’s ordination and installation, his wife Jenny gave a brief but moving speech.

She gave a mihi,and thanked the diocese for its support over the death of her mum, who passed away three weeks ago.  She remembered Justin’s mum, too, and gave thanks for others who’ve died after leading lives of loving service to the diocese.

Jenny spoke of her amazement at the path her family had been led to walk – and quoted an observation Justin had often made: that God always leads His followers “from the known to the unknown.”

The new bishop then spoke briefly about the legacy he hopes his diocese will leave.

He didn’t want future generations to look back at the Anglican Church as the provider of fine buildings – but as the body that had given birth to generations of faithful followers of Jesus Christ, “as numerous as the stars in the sky.”

A Kiwi version of the Gospel

The service was long.

With so many in the cathedral, even the serving of communion took about 15 minutes.

But that didn’t seem to matter to the throngs of wellwishers who were still queueing up to greet their new bishop an hour after the service had ended.

For Archbishop David Moxon, the sheer energy of the occasion – and the numbers who turned out for it – was the thing that impressed him.

“There is joy here,” he said, “but also depth. This is the Holy Spirit at work.”

He felt the new bishop demonstrated “an extraordinary commitment to the apostolic lifestyle… and yet there’s something very Kiwi about him.

"We’re seeing a Kiwi version of the gospel here.”

Blessings to another shepherd of the flock - Rt. Rev. Justin! May GOD continue to bless you and your ministry to be a blessing to others!