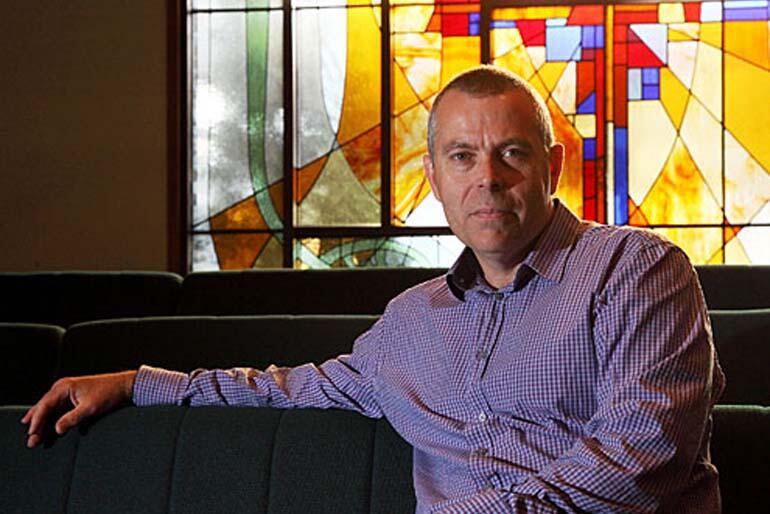 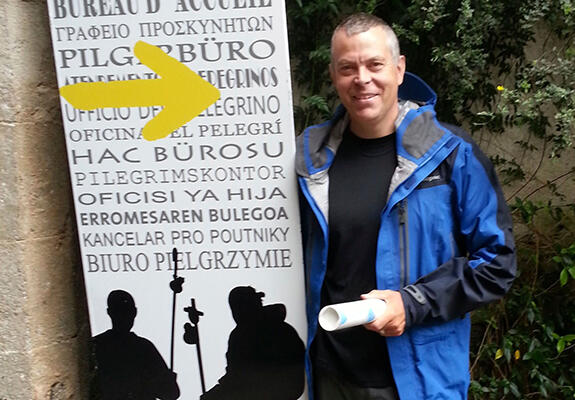 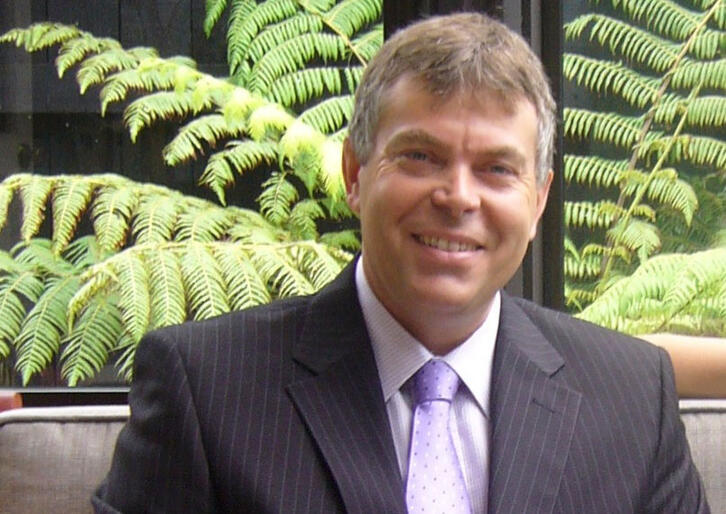 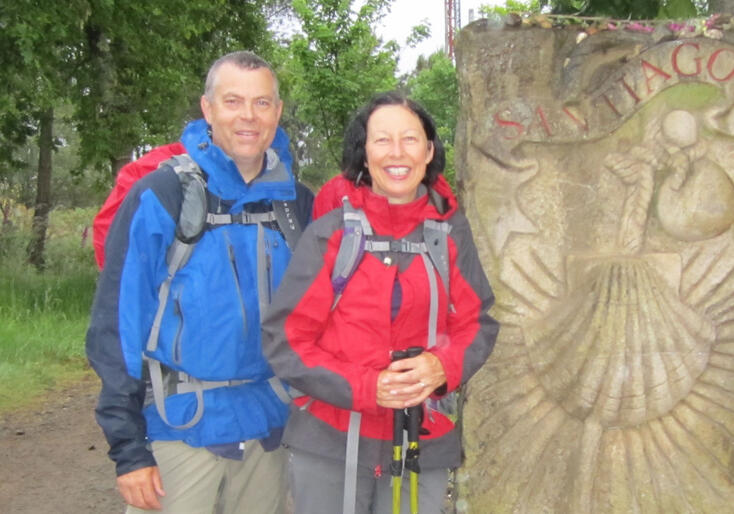 His appointment was announced to the cathedral community this morning, and the team charged with finding the new dean are celebrating Digby’s acceptance of the job.

And although he is an Anglican priest – he was ordained in 2006 – he’s spent the larger part of his 20 years in ministry in Baptist churches.

Then there’s the fact that, 10 years ago, when he was serving as a Baptist pastor in Tauranga, he fell from grace.

He was sentenced to a community service term on a charge of theft, two of insurance fraud, and one of burglary. The surface problem was his addiction to buying mountain bikes, which led to spiralling debt – and arrest and conviction.

That chain of events, he has written, left him “jobless, characterless, close to friendless, alienated, disenfranchised and without hope.”

Paradoxically, it also led him to experience “the full force of real grace”.

“In a strange way,” he has written, “I needed to experience grace and disgrace together. What I learned is we never fall from grace, we can only fall into it – with God, at least.”

After his conviction, he spent two years in Holy Trinity Anglican Church in Tauranga: unable to face people, he’d help mind the crèche where his baby daughter was being cared for, and then slip into church for the Eucharist, which fed him when all else had failed.

At the end of those two years he was asked by the vestry to become a “preaching associate” – and a short time later, Bishop John Bluck asked him to offer for ordination.

By this time, too, he was also being sought by Palmerston North’s Central Baptist Church – and with the growing sense that it was important to “finish well” with the Baptist Church, he heeded that call.

Janet Brown, who is the Dean’s Warden and who has worshipped at Wellington Cathedral for 25 years, says Digby stood out as the obvious choice among the candidates.

“All of us on the nominating team,” she says, “were of one mind about that.”

Digby began his working life as a fitter and turner, and reeled in his MA Hons in Social Science along the way to his successful leadership of the Palmerston North church. Janet says the nominators saw a “wonderful mix of strategic depth and the pragmatic” in him.

“We also saw the breadth and depth of his intellect, his grasp, his reading, his thinking. We loved his work growing worshipping communities, particularly young adults and families, and we loved the way he does that work with his wife Jane.”

Janet acknowledges that in the light of Digby’s past, some may raise their eyebrows.

“Because of my professional background – I come from a discipline that requires you to manage risk – I’ve thought carefully about those things. We, the nominators, are confident in our choice.

“And if we cannot see and hear and understand the power of redemption in a story like his, then in my view, we should shut up shop.

“It’s been a long journey for Digby. And it’s been done in the most extraordinary state of humility and faith. Having overreached himself, and made major errors, he has grown enormously, not just into grace but into his abilities.

“And he would not have grown into that grace, nor developed those abilities, had he not had the crisis and been broken in that way.”

The Bishop of Wellington, Justin Duckworth, is also convinced that Digby has the goods: “He caught us out of left field, really.

“I’m confident that Digby will honour the solid foundations of the cathedral’s past and present, and he will build on them. He is the person to lead the exploration of what being a cathedral in the capital city means in the 21st century.”

And the man himself? He says the idea of becoming Dean blindsided him, too:

Exactly one year ago this Saturday, he was in the throng in Wellington Cathedral at Justin Duckworth’s ordination. He couldn’t see what was going on up the front. So his mind wandered – and out of nowhere, a question formed in his head:

“What would it be like to be the Dean of a cathedral?”

It was a question, he says, that wouldn't go away. And he didn’t even know, then, that his predecessor, Frank Nelson, had resigned.

The great task facing the church

So what is Digby Wilkinson’s vision for being Dean?

“I’ve always been of the mind that before making grand plans, you need to know all those things that God has placed in your hands. You need to know the people, the issues, the context and the culture. Understanding those will be my first, prayerful task.

“Cathedrals are complex communities: on one hand they provide a ‘sacred space’ for the city, and on the other, they are a distinct worshipping community.

Aligning “the public face and inner life of the cathedral” is a key, he thinks.

He also sees the need to “continue and enhance” the cathedral’s worship and education – to see that the mix of the cathedral congregation reflects the city at large.

Reaching out to children, youth, young adults and families, he says, “will run alongside current ministry and not replace it – though, over time, it may inform it.

“The great task of the Anglican Church in New Zealand is to take the very best of Anglican liturgical tradition, and to make it accessible to a new generation.”

Digby and Jane Wilkinson have three children: Mitchell, who is 20, Elliot, 17 and Lucy, 11.

Digby will continue his ministry at Palmerston North Central Baptist until Christmas Day, and will be installed as Dean of the Cathedral of St Paul in January.

Hey Paddy, On the point that there is no doubt underlying problems that race differences may still play a part in peoples decisions I am inclined to agree. That is one of many unfortunate issues that will likely always plague society to some extent which doesn't cease to dishearten. However, in reply to many of your other questions regarding Digby himself, I strongly encourage you to meet to meet the man. Based on my experience (however small) I expect that it would be very difficult to continue to foster/harbour the human non forgiving side of yourself after even one or two conversations with him.

(Although if your first sentence is a disclaimer that what you wrote was not your true feelings towards the subject please consider the above statements redundant :) )

Now I want to play the devil’s advocate and say what if this person was Maori? What if he/she was an ex minister from the Ringatu or Ratana Church (both of my whanau come from these haahi) or the Pihopatanga? What if he or she had some addictions that were serious leading to fraud and possible time in jail? And what if over time he/she worked through addictions, with counselling and several years later had turned over a new leaf in life becoming successful in Ministry leadership?
What if he/she applied for the position at St Paul's Cathedral would the powers that be at St Pauls and the diocese look at his or her record and not have been sceptical? Give him/her the benefit of the doubt and say yes he's had issues in the past but we have the ultimate faith in God that he/she has turned from their sins and is now a good leader in ministry and we will make him/her the dean? Would that actually happen? Because somehow in my sceptical mind I don't think it will. Race still plays a distinctive part in our psych weather we know it or not, especially the way things are in NZ race relations. The sense of suspicion among ourselves is very prevalent in the church even more so in admi...

It irks me to look at this from a supposed Christian forgiving perspective, yet on hindsight this man was responsible for fraud in his own church. And yes he's been dealing with those issues and hopefully he's worked through them. Addictions come in all sorts of shapes and sizes beyond social status, cultures and religion. Wilkinson was no different.
On the human non forgiving side of me (judge me if you like) how is it that this man a former addict and defrauding the Baptist church out of so much money then becomes the Anglican Dean of St Paul's Cathedral in Wellington? And in all Christian forgiving circumstances can St Paul's Cathedral and Wellington Diocese approve his repentance and make him the Dean of St Paul's Cathedral? Does the Cathedral have very strict monitoring systems to prevent fraud at the hands of its newly appointed dean? I will never know. Only time will tell. It’s like the church is dancing on hot charcoals waiting for someone to get singed so everyone can say to the Cathedral and Wellington Dioceses see I told you.
But to me this story seems a little more sinister than usual. George looks at this from the perspective of the thieves being ki...

A delight to read of this appointment. Well done Wellington! May the work of your Cathedral thrive and see many healed and transformed lives through God's goodness and Dean Digby's ministry. Bless you all.

A bold and imaginative appointment. Every blessing to you all for a Spirit-filled future.