The Anglican Church in these islands has a new Archbishop: the Rt Rev Dr Winston Halapua, Bishop of Polynesia. 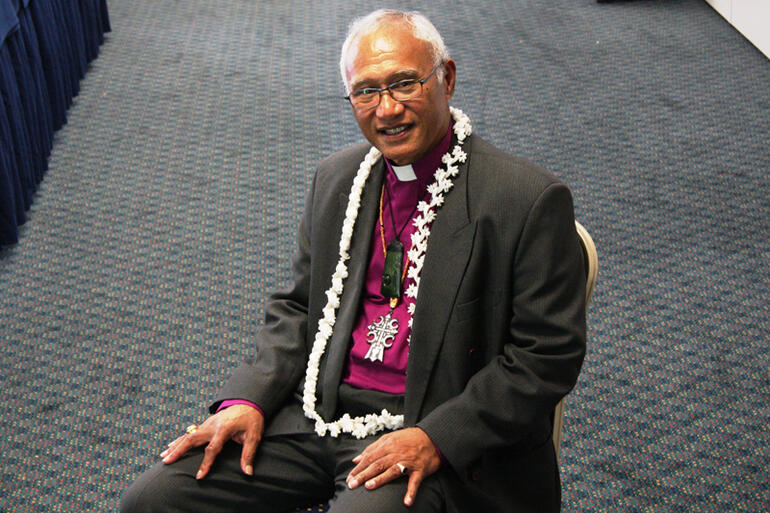 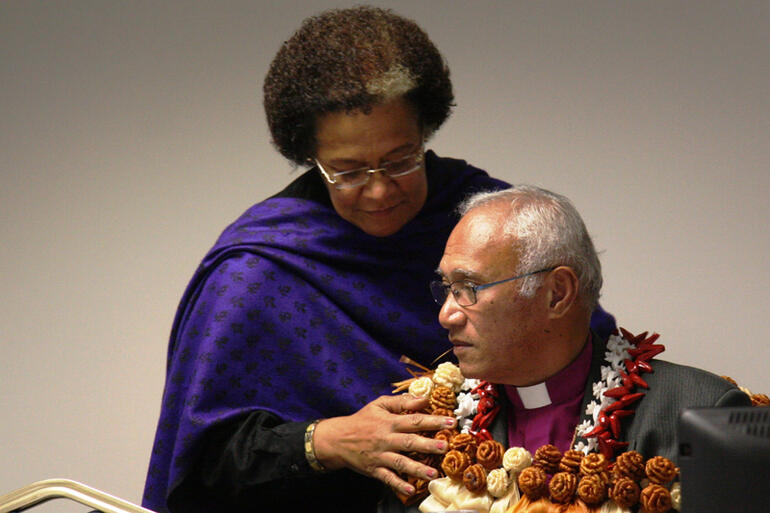 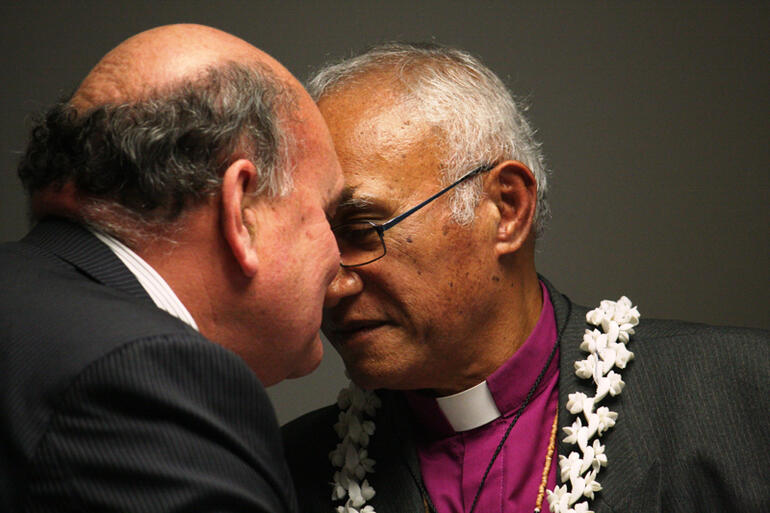 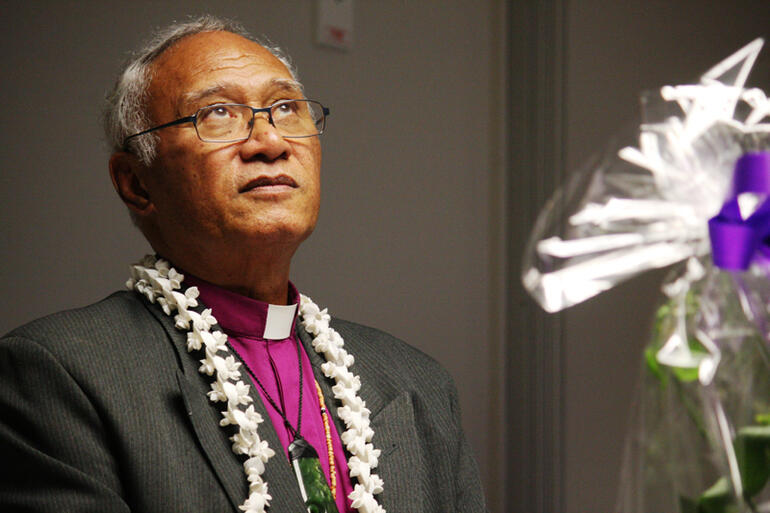 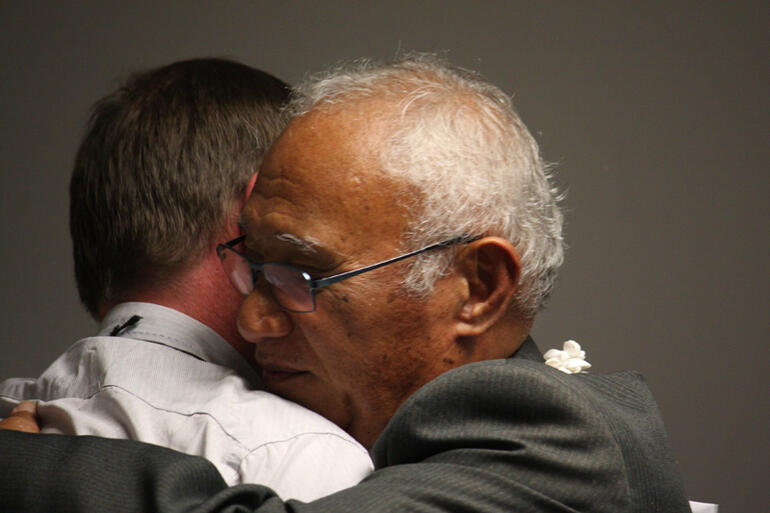 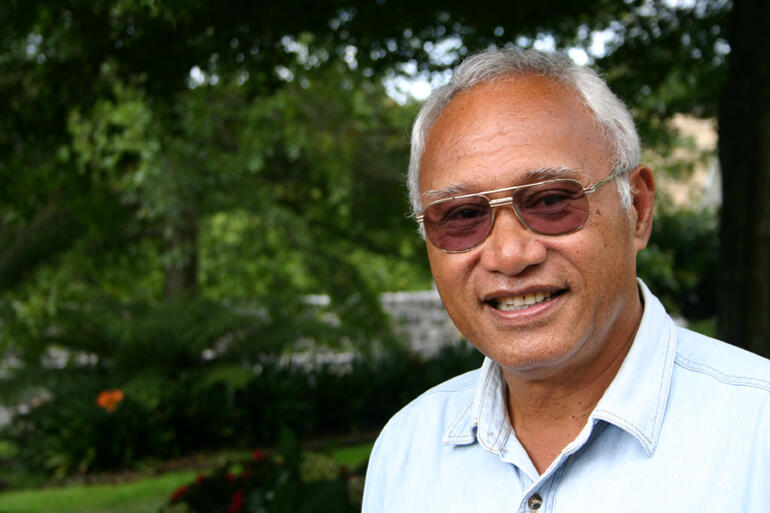 General Synod this morning greeted its newly announced Archbishop with a standing ovation.

At 10.45am Archbishop Brown Turei declared that Bishop Winston Halapua had been elected as the new Bishop of Polynesia – and therefore, as one of the three Archbishops of the Anglican Church of Aotearoa, New Zealand and Polynesia.

There followed a series of brief but moving presentations from representatives of each of the three tikanga.

These were led by Mrs Lola Kolomatangi, on behalf of the Diocese of Polynesia – who said it was the custom of mothers in the Pacific to give “a cultural vestment” to its new leaders.

With that, Polynesian women brought forward various gifts and tokens – Tongan tapa, and three garlands, each representing Fiji, Samoa and Tonga, which they placed around Bishop Winston’s neck.

He, in turn, took two of those lei and draped them around the necks of the two existing Archbishops, Brown Turei and David Moxon.

Herewini Parata moved to present the greetings of Tikanga Maori to the new bishop – and then, with the help of Archbishop Turei, he tied a pounamu taonga, a greenstone pendant, around Dr Halapua’s neck.

He led a haka – and then it was Bishop Ross Bay’s turn to present the greetings of Tikanga Pakeha to the new Bishop, with a large floral bouquet.

As is the Fijian custom, the Rev Sam Koi responded in Fijian on behalf of the new Bishop. Surrounded by the other men in the Diocese of Polynesia delegation, all of whom were on bended knee, he told Synod that they would return to their countries and churches, telling of the honour bestowed on their bishop by Synod.

Bishop Halapua himself said nothing – until he left the conference hall, and began the first of the day’s media interviews.

Bishop Halapua succeeds the late Bishop Jabez Bryce, who had led the Diocese of Polynesia for 35 years, and who died in February this year.

Dr Halapua was elected as an assistant bishop in 2005.

Bishop Bryce had wanted to strengthen the diocese’s outreach in the far-flung islands it serves – Fiji, Tonga, Samoa and American Samoa – and Dr Halapua was one of three assistant bishops chosen at that time.

In 2008, at the invitation of the Archbishop of Canterbury, Dr Rowan Williams, Bishop Halapua served as chaplain for the Lambeth Conference of bishops.

Bishop Winston’s ministry has an academic focus. He has a doctorate in sociology from the University of the South Pacific, and he came to New Zealand in 1996 to take up a post as a lecturer at St John’s College, the Auckland theological college where many Anglican priests are trained.

In 1997 he was appointed Principal of the College of the Diocese of Polynesia in New Zealand, which is one of the three constituent colleges at the greater St John’s College campus. As such, he has been deeply involved in the formation of many Polynesian priests, and as a lecturer at Auckland University’s School of Theology.

In 2008 the late Bishop Bryce had announced his intention to retire and he played a part in planning the election for his successor.

This Electoral College was originally scheduled to take place in May – but with Bishop Bryce’s death, the election was moved forward.

In the Anglican scheme of things, bishops are declared elected only after they have been approved in a three-part process. They are nominated at the Electoral College – and that nomination must then be approved by the other bishops in the church, and (assuming there are no hitches there) by General Synod, which functions as the parliament of the church.

The final stage of the electoral process, the balloting of members of the General Synod, took place during their Gisborne meeting.

Bishop Winston is married to Sue, who is also an ordained priest (in the Diocese of Auckland) and they have two adult sons.

The new diocesan Bishop of Polynesia – and therefore Archbishop of this province of the Anglican church – will be ordained and installed at Suva’s Holy Trinity Cathedral on August 1 this year.

@patti, what do you mean 'purpose of you time here' direct to Winston Halapua?
Are you suggesting that our pacific whanau need a specific time here?

You melt into the fold, so much so that it is hard to tell you from among the ones you love. Thankyou, Matua for crossing those cultural divides with their illusionary boundaries. Our Island whanau have called their Taonga home - and now, may we know the purpose of your time here in Aotearoa New Zealand. Arohanui Patti Lao-Wood

Dear Winston. Congratulations with your role. I couldn't think of anyone other than you to take on this role. You might remember in 2001 I spoke with you about the type of ministry that I was inspired to take on. You blessed me and told me that I would suffer a lot and that it would be time of challenge. We'll yes you are right. I suffered more than I thought and will endure more. But it was through your encouragement and love that I found inspiration in your words. My last memory of you was at Maria's wedding in October 2009. We sat with each other and we discussed gender issues. I'm sure I could have written a PH.d by the end of the evening with your inspirational insight. Thank you so much Winston. with love, Paddy.

How delighted and surprised I was today to open my US Episcopal News Service on my e-mail and find this wonderful news. Winston, I met you and your wife, Sue, in 1992 when I was Sr. Anne and with Sr. Faith of the Sisters of Charity visited you in Suva when we stayed with the Sisters there after a month in Aotearoa New Zealand. It seems like a small world as we did discover on an afternoon on your porch with Sue and her mother drinking glass after glass of fruit punch and talking about all of the people that we all knew in Plympton S.Maurice back in England where our Motherhouse was. We actually lived in Boulder City, Nevada at the time. Sister Faith went to her greater glory in December this past year, and I, although no longer in the Order, am very active in my parish church of St. George in Arlington, Virginia. The pictures tell me that we have advanced in years, but evidently not David (Moxon) who is one of those fortunate people who will, most likely, always stay young. I think of those really special days as treasured times and pray for you all the blessings of our God as you enter this new phase of your unending ministry.
Faithfully, Anne Omelianowich

Congratulations to you dear Bishop Winston, as you move inexorably into the role of Archbishop in Polynesia.

I have fond memories of your singing in the Choir of Suva Cathedral, when I was there as as parishioner in the late 1960s. I remember, too, your gracious father, who was ordained a bishop for the diocese in Tonga, under the Archbishopric of The well-known Aussie, John- Charles Vockler.

Those were happier days in Fiji, before any of the coups brought problems to your home Islands in the Pacific. May God richly bless your new and challenging ministry.