This church 'unable to adopt' the Covenant

General Synod turns down the proposed Anglican Covenant but reinforces its desire to stay woven into the fabric of Communion life. 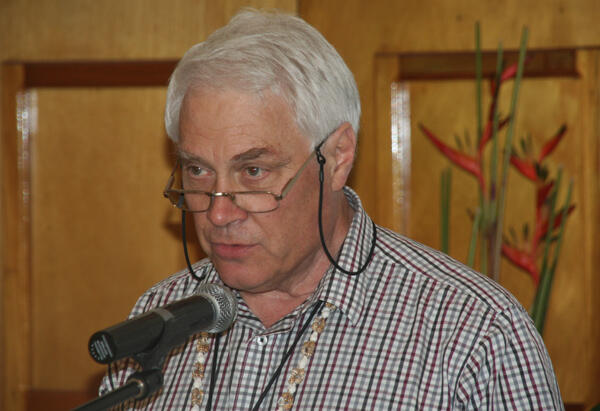 As expected, the General Synod said a final ‘No’ to the proposed Anglican Covenant today.

But it did so quietly, and the original motion was amended to stress this church’s desire to remain tightly knit with the Communion.

And to suggest that the early parts of the Covenant – the non-contentious bits about “Our Inheritance in Faith” etc – “are a useful starting point” for future Anglican thinking about their church.

The first clause of the draft motion, proposed by Dr Tony Fitchett and Ven Turi Hollis, and set out in the synod agenda, was short and to the point.

That simply proposed that this church: Declines to adopt the proposed Anglican Covenant.

That’s been replaced by the resolution which says this church:

Is unable to adopt the proposed Anglican Covenant due to concerns about aspects of Section 4, but subscribes to Sections 1, 2, and 3 as currently drafted as a useful starting point for consideration of our Anglican understanding of the church.

And where the second clause of the proposed motion – as set out in the synod papers – had proposed that this church affirms the commitment of the Anglican Church in Aotearoa, New Zealand and Polynesia to the life of the Anglican Communion.

The resolution passed turns the fullstop after ‘Communion’ into a comma, and adds a clause which reads: including the roles and responsibilities of the four Instruments of Communion as they currently operate.

The amendments are subtle. And they sparked some subtle debate, too, as to the exact nuances of meaning of the word ‘subscribes’,  and whether ‘considers’ or ‘regards’ might be better choices.

But Archbishop David Moxon, who drove the changes, felt they were necessary to send the right signals.

Both to enhance this province’s relationship with the wider Communion, and to stay consistent with the resolution passed by the 2010 General Synod in Gisborne which had agreed to the first three sections of the covenant ‘in principle’.

He had made contact with Tony Fitchett and Turi Hollis a few days before the synod, and they were happy to go with his amendments.

Dr Fitchett spoke to his motion. Retold briefly what had become of the proposed Covenant as it did the rounds of the Episcopal units – it didn’t travel well – and detailed what was in it.

He raised no particular objection to the first three parts, but claimed that section 4, which holds out the possibility of “relational consequences” for provinces deemed to have erred, was another matter.

“The stated purpose of the Covenant is to enable ‘fuller ecclesial communion’ – it is an interesting concept that one achieves communion by ex-communication.”

He claimed Section 4’s “approach to honest difference is contrary to our Anglican understanding of the nature of the Church, to the way of Christ, and to justice.

“Anglicans,” he said, “are used to disagreement.”

“There has always been disagreement in the Communion, and in the Church of England from which it grew.

“Over time Anglicans progressed from burning those with whom they disagree, to a painfully won acceptance that people of differing belief can live and worship together in one church despite those differences.”

To read the full text of the resolution, click here.

I wonder if the author's bias has led him to adopt Tony Fitchett's analysis too readily, here. There is no mention of the fact that the Covenant *did* travel well to at least three of the Tikanga Pakeha Dioceses. Or do we not count?

[General Synod: be resolute, be strong, be courageous. May we all know God's blessings.]

What a shame. We are too self centred to take real steps to being accountable to the Communion. Obviously our continued desire to head in our own direction has over-ruled any sense of accountability to the wider Church. It will be interesting to see how other provinces feel about this rejection, and whether we actually ' did so quietly, and the original motion was amended to stress this church’s desire to remain tightly knit with the Communion.'

The ACANZP will continue to drift from the Communion into oblivion.