Teaching the alphabet of love

Archbishops Brown Turei and Winston Halapua have invited 'the new kid on their block' – Archbishop Philip Richardson – to compose a Christmas message on behalf of all three. 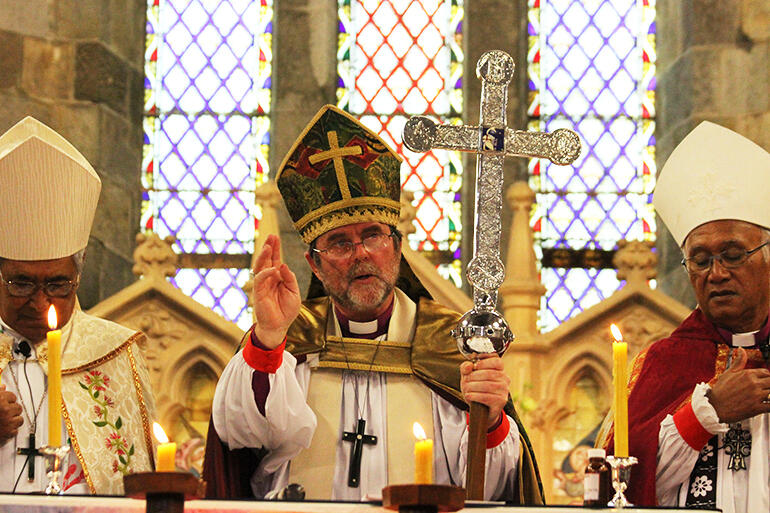 Early on in my life as a priest I was called to Whangarei Base Hospital to sit with someone who was dying in the Intensive Care Unit.

It was late at night, and as I sat waiting for the family to arrive – they were coming from some distance away, and I was there for some time – I became aware of a remarkable communication happening further along the ICU.

A man was lying utterly still in bed, and a woman was sitting with him.

He could… blink. That was all.

And yet, despite this awful predicament, this husband and his wife – I learned that that was who they were – were conducting a painfully slow, but very beautiful conversation.

She would begin to recite the alphabet to him – and he would blink when she reached the letter he wanted.

The staff told me that she had been there for him in this way, eight hours every day, for weeks.

The risk of loving...

I learned that night at the Whangarei Base Hospital that when we take the risk of loving someone… how truly fragile and precious that bond is.

Vulnerable to rejection, abuse and distortion. Or disaster. Because risk, fragility and vulnerability are, it seems, in the very nature of life.

And yet the paradox is that vulnerable, fragile love can be awesomely powerful and transformative.

The only power on earth that can transform an enemy into friend, said Martin Luther King, is love.

Nelson Mandela understood that truth too – and by that truth he transformed South Africa.

The Christmas story, of course, tells us the extraordinary truth about the redemptive power of fragile love.

The shepherds and the three wise men are told that Immanuel – God with us – is to be found among the squalor and smell of a stable, in an inconsequential country on the troublesome edge of a vast empire.

God from God, Light from Light, true God from true God…is to be found in an infant born to a mother and father who marry because of the child’s unexpected and unplanned conception… born only to have to flee as a refugee to another land for the fear of a tyrant.

Thesign of all hope.

So this Christmas we celebrate the transforming power of love, the vulnerability and fragility of love.

We celebrate the way God reaches out to us, not from a position of power and strength, but from the very heart of this fragility – the Christ child.

May the God of this fragile love, the God who takes the risk of reaching out and being vulnerable, who really loves us, deeply bless you this Christmas.

Beautiful reflection! It was an unplanned conception. I totally agree, I don't understand why they keep calling it the Virgin Birth, Mary had intercourse! It is biologically not possible to have a baby otherwise. And I think its unrealistic to say it was from the Holy Spirit! God created human kind, biologically, why would God then think that giving birth would be otherwise!

Dear Michael, I don't see any suspicion of unbelief in Philip's account. I can see that the legitimacy and virginality of the birth of Jesus is of great importance to you. It is not at all important to many other anglicans (like me for instance). I think Philip will be well aware of this diversity and almost certainly accepts it. I don't want to spoil the beauty of what Philip witnessed in that intensive care unit but I didn't want your demand for orthodoxy to spoil that beauty either. We just have to accept one another as we are. Or put it one to one, you and I just have to accept each other as we are. May your Christmas be happy and inspiring Michael. George Armstrong.

Thank you for the essence of this Blessing-Love incarnate in fragility - the need to be personaly vulnerable to allow Christ to birth in our hearts every day! The need for the Church to listen to where the Spirit is leading and also to be a vulnerable, open and safe space for all. Let us all celebrate with you the power of fragile love!

Just wanting to clarify: are you saying that Jesus was conceived illegitimately as a result of intercourse? This is what you seem to say. I assume though that is not intended and that you would want to affirm the virgin birth and Jesus conception as a result of the miraculous work of the Holy Spirit. Is that correct? Thanks. Michael