The Rev Jayson Rhodes attends the Installation of Tim Noon as Director of Music at Exeter Cathedral. 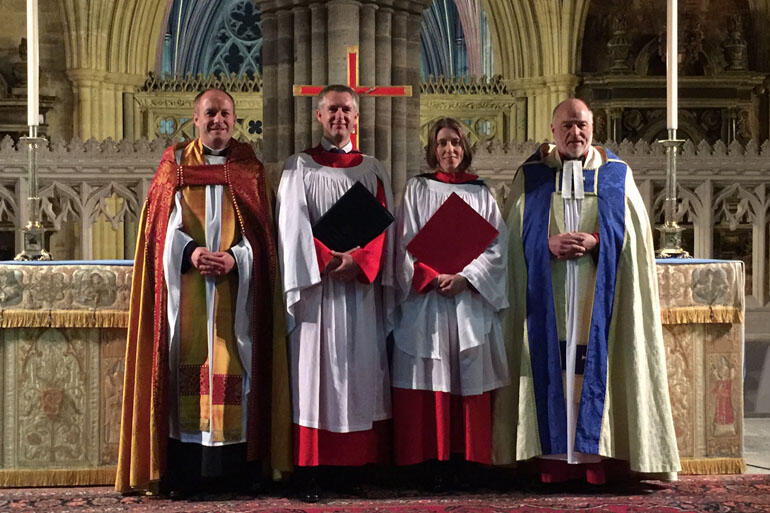 A rare privilege in the past two weeks was to watch a musician direct a cathedral choir in New Zealand, and then two weeks later to see him in the same role in the south-west of England.

The season of Christmas and Epiphany has a chronological story to tell with immense theological implications for each of us. Hearing choirs sing in Auckland, then Exeter, and Canterbury, had reminded me of the role each of us has to tell the sacred story through word and action. Today the mass media sparks the social imagination; so often it is a mediator of what is sacred in the community – from the death of David Bowie to celebrations – all is told in print and twitter. Choral music is a reminder that the church needs to tell its own story well so it can also spark the imagination.

Tim Noon conducted his final service in Holy Trinity Cathedral Auckland as the Director of Music on Christmas Day. He was then installed, in the same role, at Exeter Cathedral on the First Sunday after the Epiphany.

So on a weekend that news headlines were about the Anglican Communion facing a possible family split, the worship in Exeter Cathedral was a reminder of what a family holds in common, a story that tells of a grounded God in the season of Epiphany. The opportunity to take part in the Service of Installation told of the hospitality of Exeter Cathedral, and the relationships of the worldwide Anglican Communion.

The Dean of Exeter, Jonathan Draper, outlined the role of Director of Music as one whereby Christian faith is expressed in the enhancement of worship through music that in turn inspires others. A line that caught my attention, in the words of Installation, was the Dean asked Tim to ensure that ‘people were able to catch a vision of holiness’ and so be strengthened in their discipleship. So the story of Christ is told in the music to inspire others to tell the same story in their lives. Tim was then asked to sign the book of oaths at the high altar

Walking in the nave before the service I heard Tim with the choir in rehearsal call out ‘Here we go,’ to bring the voices of the choir to a crescendo point in the setting of the Magnificat. During the service I saw him crouch down to the eye level of the junior boy and girl choristers, to encourage them in their singing to enable the congregation to ‘catch a vision of holiness.’ Some of those junior choristers were then later installed into the choir to tell the story of Christ.

So amongst the headlines of the Anglican Communion that told of anything but holiness, there was a glimpse and a vision of holiness through the language of music.

The media is certainly a way that society engages with the sacred in a somewhat mutual relationship with audiences. The media tend to do this task well although some criticism at stages is warranted, but the church is not an easy institution to present in a news story. The church also has to mediate the sacred within and beyond our walls.

On a Sunday that celebrated the Baptism of Christ, and on which musicians were installed to enhance worship, there was a reminder at Exeter of what each person is ‘installed’ to do through his or her baptism. The more of these glimpses of holiness that we create in everyday life, the more each of us is telling the sacred story of a grounded God who is born in each of us. Our churches are blessed with musicians who through their amazing talent tell of the sacred. The church needs storytellers more than ever.

The Rev Jayson Rhodes is Priest Assistant at Holy Trinity Cathedral and Communications Manager for the Diocese of Auckland.