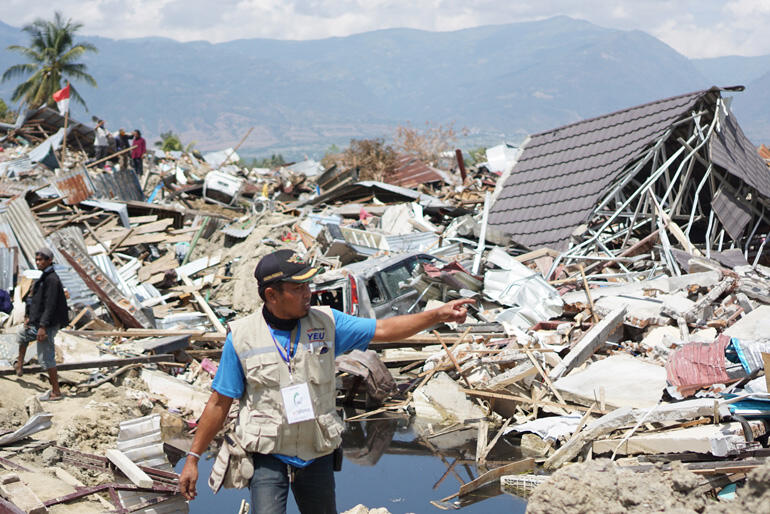 Christian World Service has launched an appeal to support survivors of the earthquakes and tsunami in Central Sulawesi, Indonesia.

A magnitude 7.4 earthquake on September 28 was followed by a tsunami with waves reaching up to 6 metres high, and speeds estimated to have reached 400 kilometres an hour.

Nearly 2,000 people are confirmed dead, with another 74,444 displaced and in total over 1.1 million affected.

An estimated 65,733 houses are damaged and electricity has only been partly restored.  Hungry survivors have intercepted relief deliveries before they reached their intended destination.

The high level of damage has slowed recovery efforts.

Both tsunami and earthquakes have cut off roads and ports and Palu’s small airport has been damaged.

As aftershocks continue, the threat of diseases like malaria remain as heavy rainfall is predicted in the next few weeks.

Families have survived on what they could salvage from quake damaged ruins but these supplies are disappearing fast.

“The people of Central Sulawesi have been through a terrible ordeal.

They need food, water, shelter and more in the weeks ahead.

“ACT (Action by Churches Together) Alliance Indonesia is working closely with authorities to coordinate their response to get help to the most vulnerable people including pregnant women, nursing mothers and the elderly.  Please give generously to help the survivors,” said National Director of Christian World Service Pauline McKay as the appeal was launched.

“We are grateful for a steady stream of donations since we launched the appeal last week, but more is needed to continue relief efforts,” she added.

Indonesia has banned foreign non-governmental organisations from operating without approval and insists they support the local response.

The first medical team began operations on October 1 after a 24-hour overland trip.

They are providing medical care and psychosocial support in the grounds of the Grand Mosque in Palu. Local staff have distributed the first relief shipments including food, tarpaulins, sleeping mats, bottled water and hygiene kits.  Water has been distributed to 2,000 people in Sigi District who had previously received none. Three medical teams have been deployed to assist in a variety of capacities, including anaesthetists for Palu’s Samaritan Hospital. More help is on the way.

Churches have opened their doors for those needing help and are assisting with burials and prayers.

CWS is appealing for funds for the humanitarian response run by ACT Alliance Indonesia whose members are coordinating their efforts and finalising their aid plans.

CWS is a member of ACT Alliance a global coalition of 150 churches and church-related organisations working together on humanitarian, development and advocacy in over 125 countries.