About 800 people gathered to support Henry Bull's ordination to the episcopate yesterday. He chose to become Bishop Henry Bull of Vanua Levu and Taveuni in a cathedral not made by hands...
• Bishop Helen-Ann Hartley's Labasa sermon 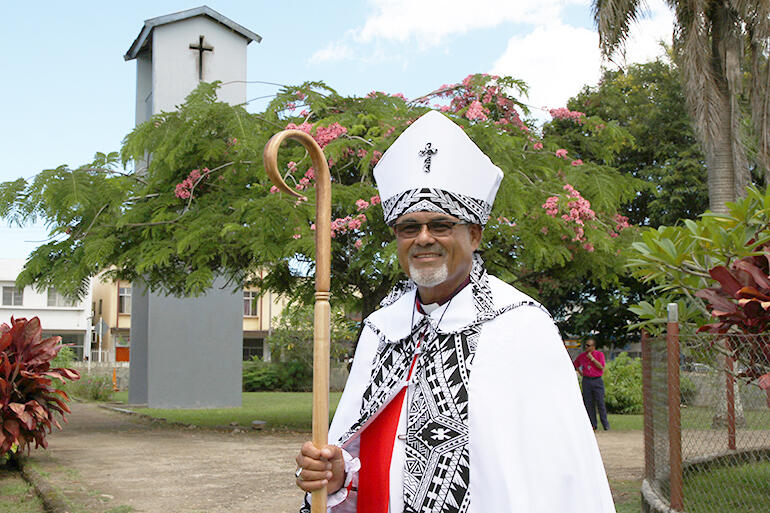 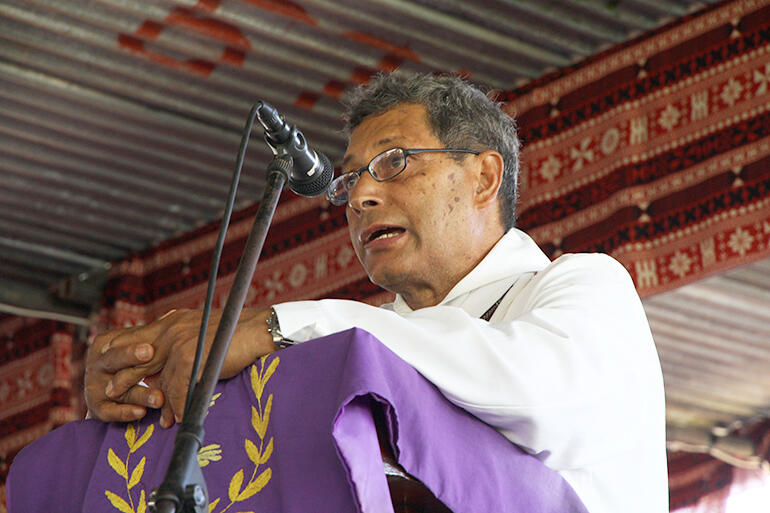 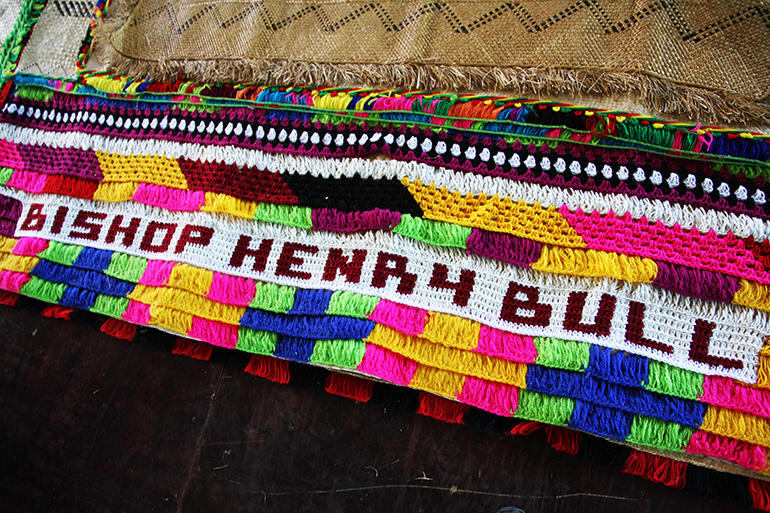 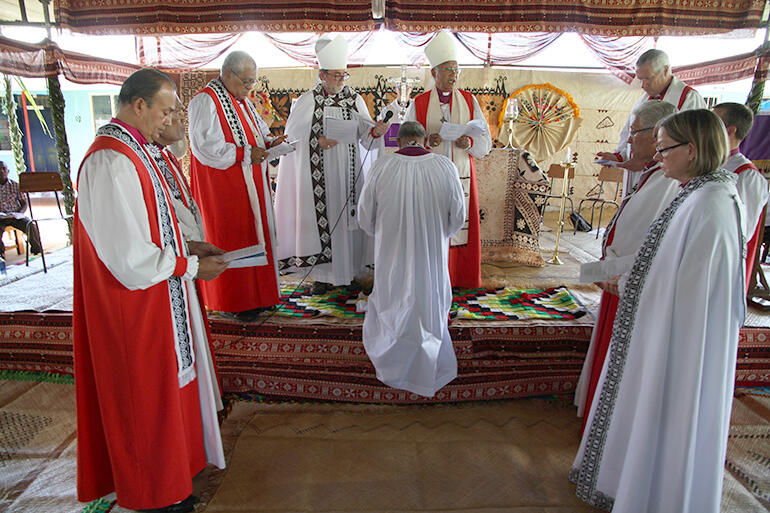 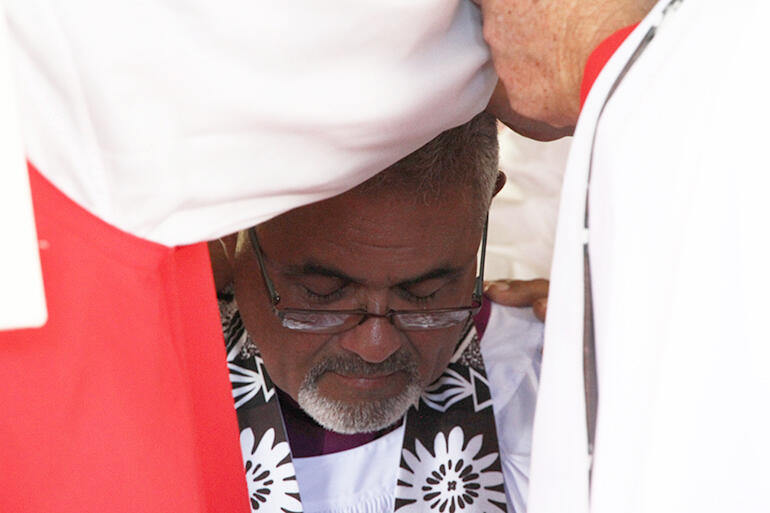 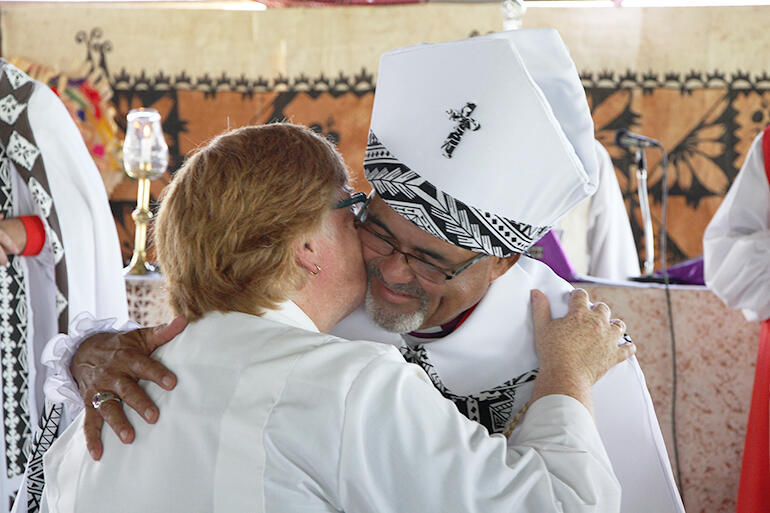 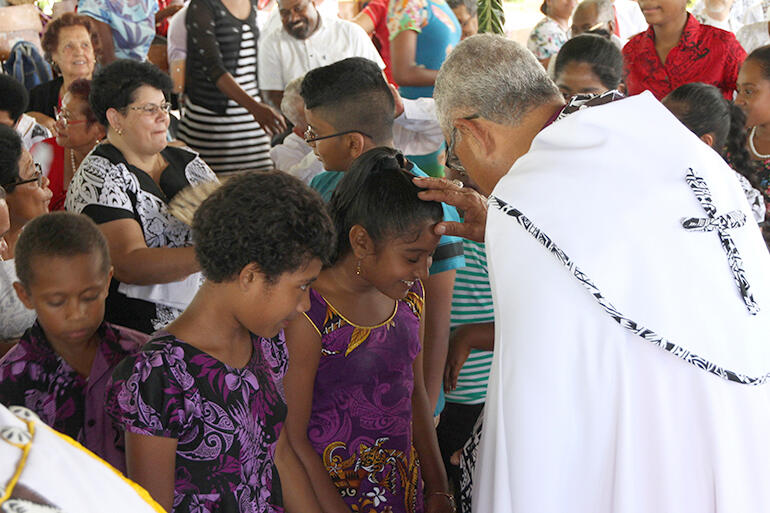 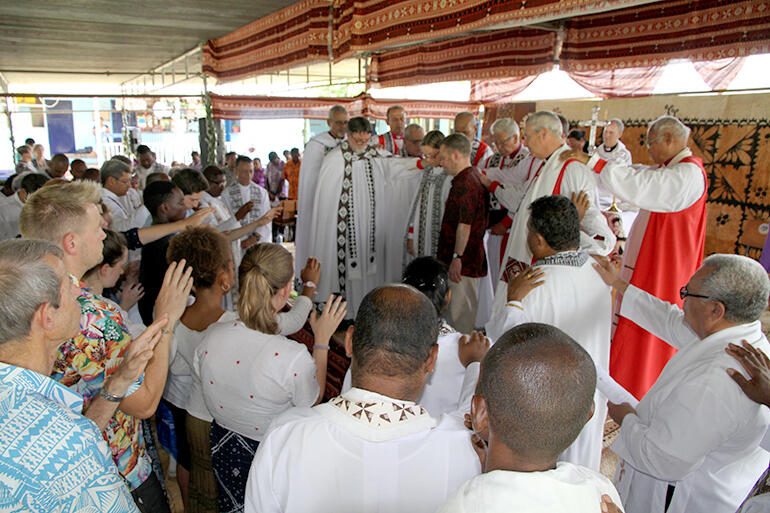 About 800 people gathered to support Henry Bull as he was made Bishop Henry Bull of Vanua Levu and Taveuni on Sunday.

They gathered, not in a splendid neo Gothic cathedral – but in a shelter pitched in the playground of St Mary's Primary School, Labasa town, under a large corrugated tin roof, propped up by scaffolding, open on all four sides to the elements.

So what was that about?

Bishops áre supposed to get ordained in splendid cathedrals, aren't they?

Well, Henry was born and raised on the remote coast of Vanua Levu, near the mouth of the Dreketi River and, to this day, his ministry radiates from The Church of The Holy Cross in Dreketi – which he helped build.

Around those parts, many folk are subsistence farmers – and for them, a long, expensive and complicated trip to Suva, on the far side of Fiji's other main island, Viti Levu, for an ordination in Holy Trinity Cathedral was possible in theory, maybe – but so too, is flying to the moon.

So, there was never any question where Henry would choose to celebrate God's faithfulness (that's how he sees his ordination) – he'd rather be with his many friends.

There's another thing about that setting, too, says Bishop Henry:

"I wanted the people to know that the real church is not the buildings – but they themselves, the living stones."

The setting of the service resonated deeply with both Archbishops.

Archbishop Winston said the notion that episcopal ordinations "have to be done in cathedrals… is what has trapped us in the past.

"What we have seen today is that where the people are – that's like a cathedral. This is eye-opening for the diocese."

"One of the great characteristics of Anglican leadership", he said, "is a sense of being incarnated in community. Being really embedded and immersed in community.

"Today was a celebration of the people of this island, and the people of Taveuni. Bishop Henry is one of their own, and his connections to this whenua go back a long way.

"You could see that in the way we ordained him under a simple shelter – but in the compound of a church that he's known since he was a boy.

"This was a place with no walls, no doors, and no windows.

"So anyone could come, no-one's excluded – and everyone's invited.

"That seems to me the heart of the ministry of the church, embodied in this man – and reflected in every aspect of today."

So why did they hold the ordination in the playground, rather than inside St Thomas' Labasa, which is next door to the school?

Well, there was a simple question of fit: there was no way you were going to shoehorn 800 plus well-wishers into that church.

But secondly, the open-air setting, in the playground of an Anglican primary school, seemed to fit with the life message of Bishop Henry himself - which is all about sharing the love of God which he says profoundly changed him.

The playground finishes on Labasa's main street, in the heart of its shopping strip.

So, even before the clergy and bishops had processed into the church, as the choir gently sang, welcoming the Holy Spirit into the gathering ­–  the sounds of that love washed over passers-by on the main street.

That love, that welcome, was amplified in the readings for the day, the second Sunday in Advent.

Isaiah 40: 1-11 ("Comfort, comfort my people, says your God. Speak tenderly to Jerusalem… tell her hard service has been completed");

2 Peter 3: 8-15a – and the chosen gospel reading, Mark 1:1-8, which tells about the appearance of John the Baptist – "It began just as the prophet Isaiah had written: 'Look I am sending my messenger among you, and he will prepare your way.'

Bishop Helen-Ann Hartley reflected on those passages in her sermon (you can read that here). She spoke of the "now and not yet" of God's Kingdom, of how Bishops are called to be both "holders and heralds" of God's hope, and how a bishop's ministry takes part in "rootedness and timelessness" of God. Fixed, yet always on the move."

She drew her sermon to a close in this way:

"You have waited patiently for Bishop Henry's consecration – but it has come at the right time, for this is God's time, and God is doing a new thing in our midst."

On the eve of their return to the UK, there was an honouring of Bishop Helen-Ann and her husband Myles, too.

Not only did Bishop Helen-Ann preach, but Myles – who is a director of music in Oxford – played the keyboard for the day, and later in the service the bishops and congregation called them forward to pray a blessing on them.

We can't end without acknowledging two more moments at the end of the service.

First, there was the blessing of the children.

That wasn't on the script – but when the bishops invited the children to come forward, they came in a multitude, drawn from under the trees, from the verandah of the nearby school and from within the shelter itself.

So you had blessing on an industrial scale, imparted by six bishops, to dozens of young lives.

Then, there was Bishop Henry's brief speech in response to his ordination.

He gave thanks to God for His faithfulness – and moving thanks to the people for their support.

He spoke of how his life had been changed, in 1985, deep in the bush of Vanua Levu, when he fell in with a Methodist forestry worker:

"He started to tell me about how much God loved me...

"Then I saw what had been done for me. I knew my self-worth: that I was special, I was priceless, that Christ Jesus paid the highest price for Henry Bull – so Henry Bull can be free today. Through his love and his forgiveness."

He finished this way:

"My dream and my desire as a bishop is to talk to people about the greatest thing – and that is the love of God. Because God's love is stronger than whatever we face in life.

"Thank you so much. It is through your love for me that I am able to stand here today.

"I cannot mention you all by name – but God has not forgotten you.