Grappling with an "existential threat"

The Oceania fono members have today released a communique from their recent gathering in Suva. And they've identified climate change as the first of their common concerns.
• The communique, in full
• The ABC talks climate change with the ABC 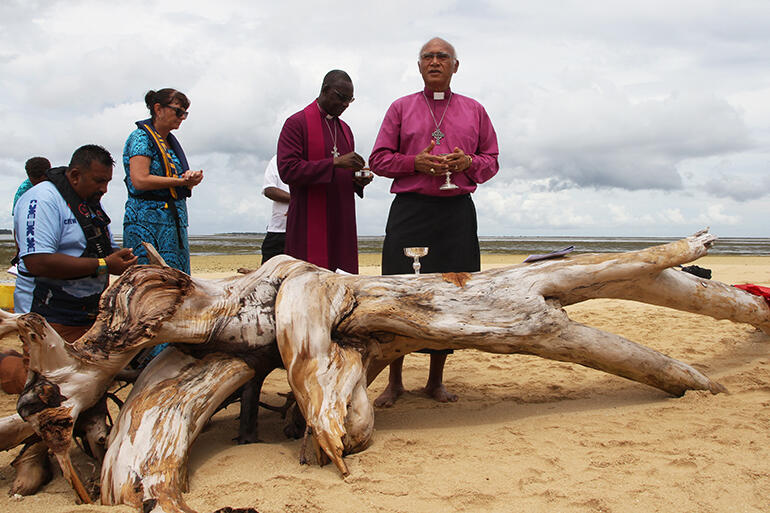 The leaders of the Anglican Church in Oceania have issued a communique from their recent fono[1] in Suva. And they've named the "existential threat" of climate change as the first of the issues pressing in on the people of their region.

The Oceania leaders welcomed both the Archbishop of Canterbury, Justin Welby, and the Bishop of Hawaii, Robert Fitzpatrick, to their deliberations – and invited them to listen and contribute as the fono members shared about the "successes and challenges of our church in fulfilling its mission to remain true to the gospel and to be agents of transformation in our region."

The communique says the fono members recognise "their moral responsibility and mutual accountability" and commit themselves "to take concrete action, to be champions and advocates, and to support each other" in taking action in various critical areas.

The first of these is climate change, which they say "poses an existential threat to our people of Oceania."

In their communique the fono members describe the presentations[2] made to them, recall their trip to a sandbank in Suva harbour "to place the urgency of this threat within the Christian value of the stewardship of God’s creation"...

And then they list a number of actions – large and small – which they will take in pursuit of climate justice.

These include exploring divestment out of fossil fuels, and reinvestment into sustainable energy.

The Fono "notes the success" of the province of Aotearoa, New Zealand and Polynesia's decision, taken at its General Synod in 2014, to divest from its fossil fuel investments.

"The Fono therefore encourages investment into sustainable energy as a valid option for our investment funds, and encourages our various Trust Boards to consider restructuring their investments to maximise returns from such innovative ideas."

The communique records that Archbishop Philip Richardson, from Aotearoa, New Zealand and Polynesia, and Archbishop George Takeli, Primate of the Anglican Church of Melanesia "will actively begin a conversation with the Melanesia Mission Trust Board[3]."

There's an educational component in their recommendations, too: all the Oceania provinces have Anglican schools – and the fono members will "encourage" the adoption of climate change studies in their curricula.

Then, there are the smaller-scale "action-oriented" campaigns – such as going plastic-free, planting trees, even picking up rubbish – which the fono members commit themselves to doing.

Not least because of the example they set.

The gathered Oceania primates and secretaries want to be, their communique says, "at the forefront of changing behaviour of our children (so they) have greater stewardship of our environment.
"The Fono will continue to monitor this commitment and will encourage mutual accountability, particularly on this critical decision.

"The Fono notes with great encouragement the change of perspective to emphasising greater resilience towards climate change.  In this regard, the Fono will encourage each other to be climate champions."

The communique also notes the work done by young Anglicans in Samoa and Tonga before and after Cyclone Gita – work that drew on specialist training they'd had in 2016.

They also looked forward to that training – in doing community vulnerability assessments using simple Geographic Information Systems – being rolled out further through the province of Aotearoa, New Zealand and Polynesia.

Violence against women and children

The communique also notes its discussions on violence against women and children. In particular, the fono members thank The House of Sarah for their presentation on gender-based violence, and encourages it in its 'zero-tolerance for violence' work.

To read the full communique – which also includes passages on leadership and capacity building, as well as observations about "relationality" in the region, click here.

[1] 'Fono' is a word common to several Polynesian languages. It means a council, or meeting – and it can describe a village council or a national assembly.

[2] The members of the fono were given an update on climate change science by Professor Beth Holland, who is both the Director of the Pacific Centre for Environment and Sustainable Development (PaCE-SD), and the University of the South Pacific's Professor of Climate Change.

They heard too, from Inia Seruirata, who is Fiji's Minister for Agriculture, Rural & Maritime Development, and National Disaster Management – as well as Fiji's High-Level Climate Champion responsible for advancing the Global Climate Action Agenda.

[3] The Melanesia Mission Trust was set up in 1862 by the first Bishop of New Zealand, George Selwyn, and by John Coleridge Paterson, the first Anglican Bishop of Melanesia (later martyred). They gave the first trustees 390 acres of farmland which later became the exclusive Auckland harbourside suburbs of Mission Bay and Kohimarama. The returns from that leasehold land, and later from an expanded and diversified investment portfolio, have provided virtually all the income for the Church in Melanesia over the last 150 years.