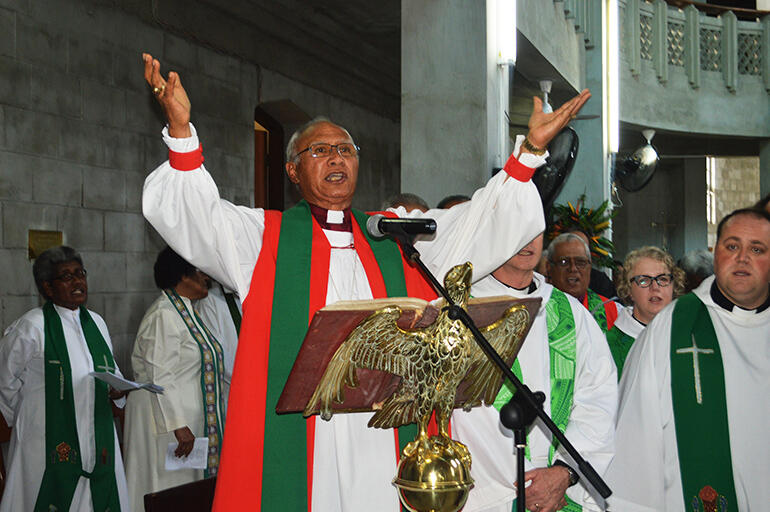 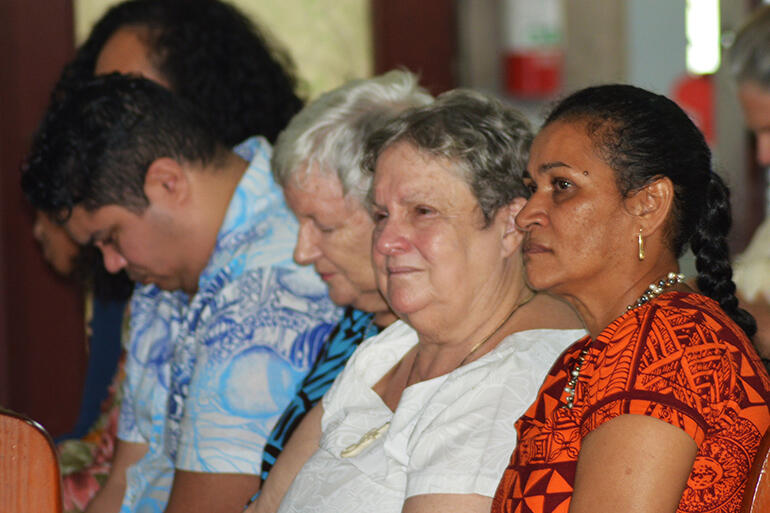 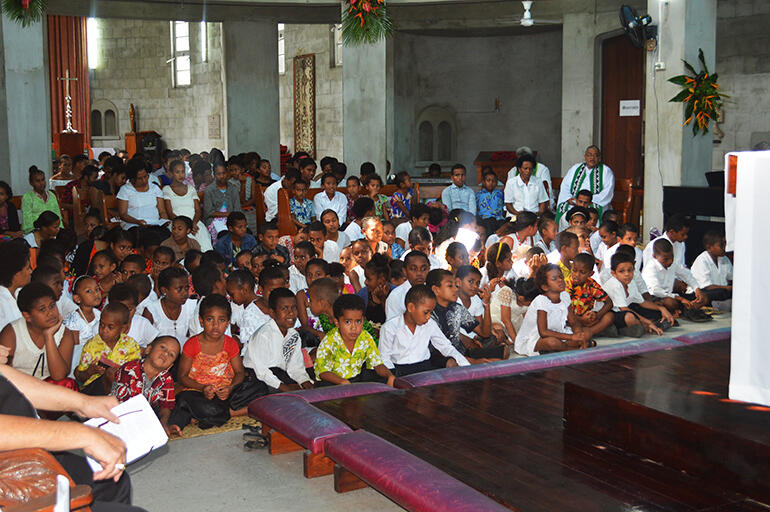 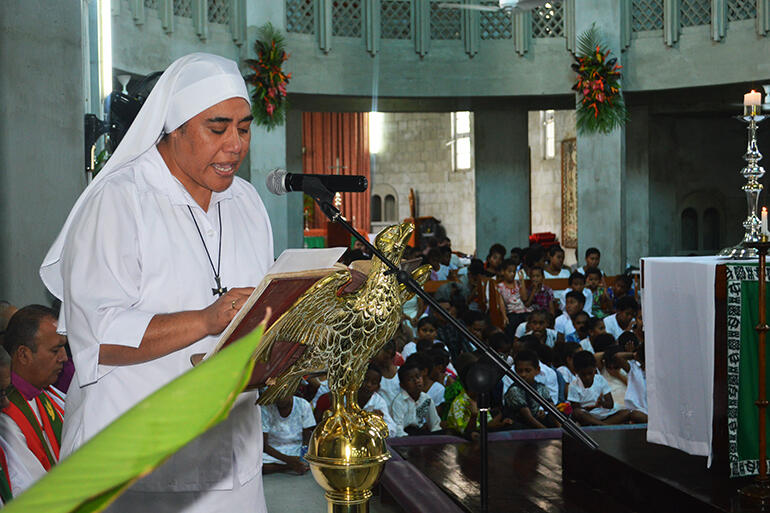 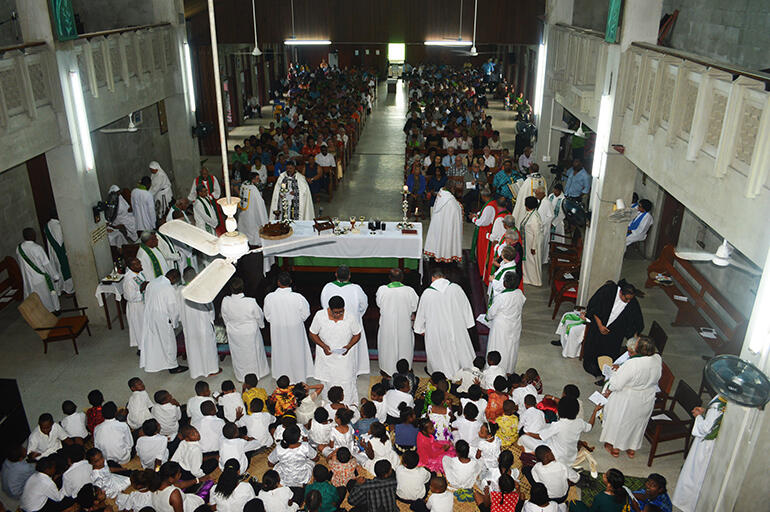 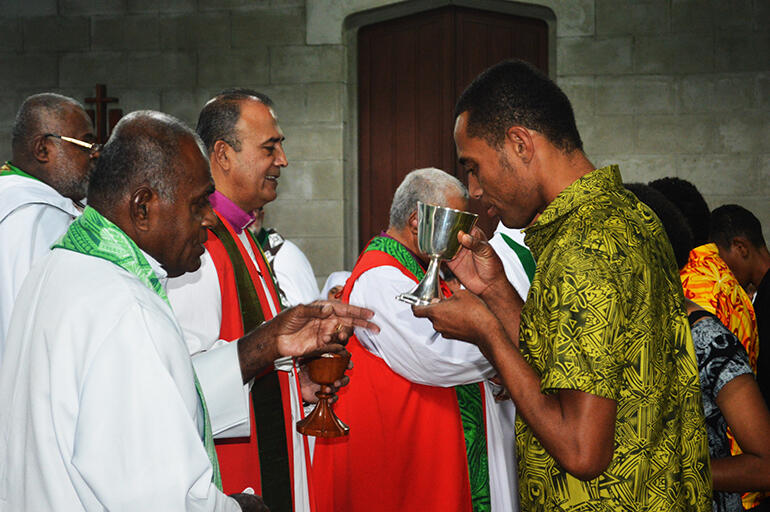 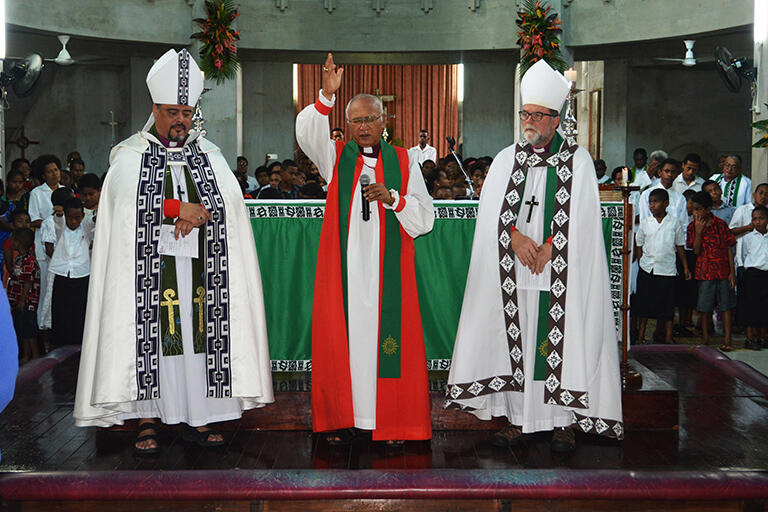 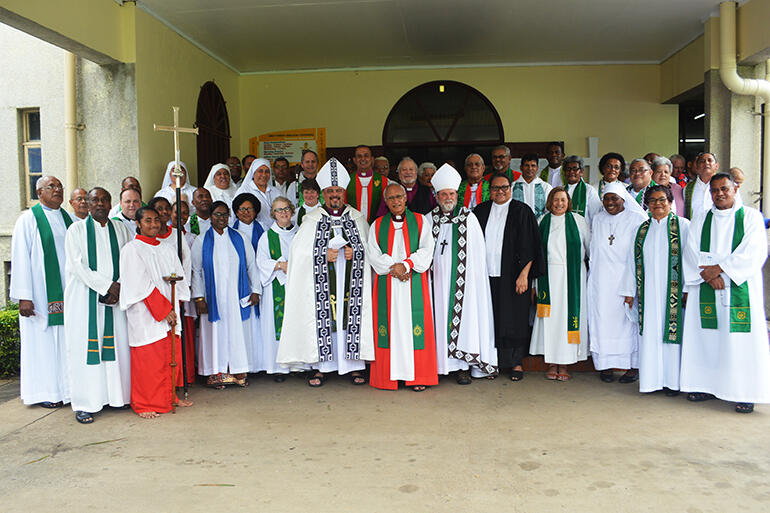 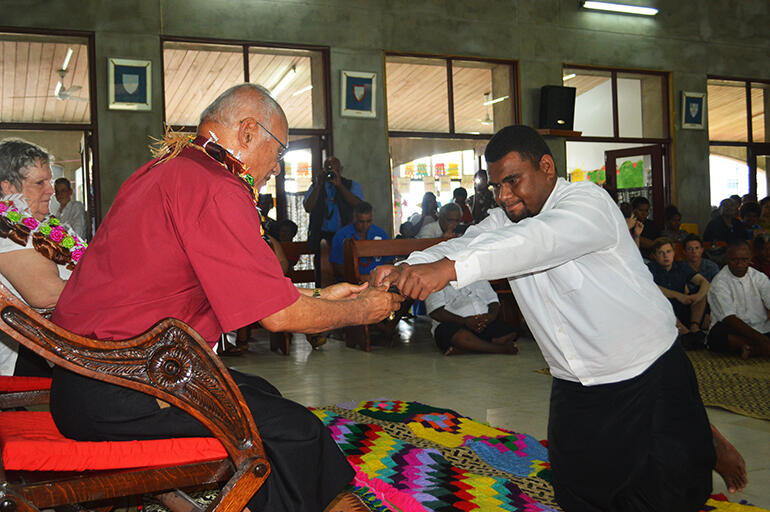 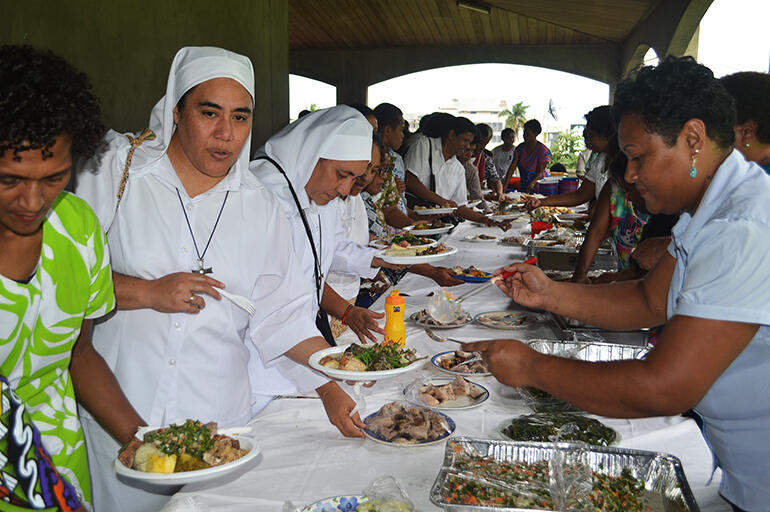 Archbishop Winston Halapua, who is 73, and who will retire on August 31 after 52 years in ministry to the Diocese of Polynesia, has preached for the last time in Suva's Holy Trinity Cathedral.

He did so on Sunday, at a service where he was farewelled by the Archdeaconry of Suva Ovalau, which is one of seven archdeaconries or episcopal units within the Diocese of Polynesia, and the first of these to formally bid him ni sa moce[1].

The cathedral was packed for the occasion – crammed with the young (heaps of them) and old, people from vestries, parishes, towns, villages and koro within the archdeaconry, including a vanload of wellwishers from Maniava, the remote hill settlement almost wiped from the map by Cyclone Winston in 2016, and which has since been built back better, thanks to the advocacy of Archbishop Winston.

There were other congregants from further afield – members of the provincial General Synod Standing Committee, for instance, who had met for business in Suva on Saturday, and who will no longer gather with Archbishop Winston as one of their number.

Members of the Diocese of Polynesia Standing Committee were there too, including Bishops Afa Vaka, Henry Bull and Gabriel Sharma (Bishops in Tonga, Vanua Levu and Taveuni, and Viti Levu West), as well as others representing areas beyond Suva and Ovalau.

Archbishop Winston preached on the gospel text of the day, Mark 6:14-29 – which is the story of Herodias demanding the head of John the Baptist on a platter – and of King Herod fulfilling her demand.

He took this last cathedral opportunity as a final chance to preach on prophetic mission and partnership in the gospel.

He began by drawing attention to the verses immediately before the day's gospel passage, which speak of Jesus sending the 12 out to the villages, giving them authority over unclean spirits, while ordering them to take nothing for their journeys:

"The horror story of the beheading of John by Herod," said Archbishop Winston, "is not the whole story.

"The Gospel of Mark is written in a troubled world –  a world where there is threat and corruption and weakness and human frailty and the love of power.

"In a troubled world, John the Baptist courageously pointed to Jesus. He was focused and fearless.

"Into a troubled context the disciples of Jesus went out two by two – partners in the gospel.

"Today we too are called to courageous mission in our troubled world – a world where there is love of power and greed where the humble people are crushed and displaced, and where there is violence and injustice.

"Today we are called to walk together to share the good news of the love of God and to heal – to address those things which are hurting and destroying people.

"The Herods and the Herodias's of this world do not have the last say. Although, like his cousin John, Jesus was cruelly killed, the mission of Jesus continues through the ages. The worst evil cannot defeat the power of love.

"The Risen Jesus is with us now, encouraging us in mission and in our walking together.

"We are called to walk together courageously with the Risen One into our needy world, into the world which God loves.

"Thank you for the constancy in prayer – day by day, I have felt supported by your prayers. I thank you so very much. What an enormous privilege to have shared in your life and ministries!

"Thank you for walking together as a Three Tikanga Church.

"The mission of Jesus goes on.

"May you continue to walk together with great courage and respond to the call of our Lord Jesus in this, our time."

Archbishop Don Tamihere then presented Archbishop Winston with three gifts from Tikanga Maori[2] – and he also paid homage to Mrs Tilisi Bryce, who was present, who teaches at the University of the South Pacific – and who is the widow of the late Archbishop Jabez Bryce, the first Archbishop from Polynesia, and the first to share in the leadership of the provincial church.

Archbishop Don was followed by Belinda Holmes, who is the wife of Archbishop Philip, and who came to Fiji because she wanted to pay tribute to the Rev Sue Halapua.

"Sue and I share the privilege of being married to Archbishops of the Province of Aotearoa, New Zealand and Polynesia.

"So, I also know the cost of this (ministry), the absence of our partners, and therefore the loneliness.

(I know about) watching the deep tiredness of our partners, and knowing that, at times, they face massive challenges..."

"Sue has been a tremendous support to the Archbishop. I look upon her as my sister, and I thank her for her love and friendship over many years."

Archbishop Winston then responded – and his voice caught as he reflected on how much the cathedral had meant to him.

He also had to clear his throat as he called forth the members of the General Synod Standing Committee – and reflected how much he valued and believed in the three tikanga church.

After the service ended, the doors that can separate the cathedral nave from the sanctuary were closed, and the congregation became observers and participants in a traditional ceremony of farewell.

Archbishop Winston formally steps down from leadership in the diocese on August 31 – however, he will take the last two weeks of August as leave, as he and Sue prepare to move to the UK, where he will begin a 12-month chaplaincy role at Westcott House, which is a CofE theological college in Cambridge.

His replacement as Diocesan Bishop of Polynesia – and therefore as Archbishop of this province – will be nominated at an electoral college held in Suva on October 26 and 27.

Assuming the person nominated is sanctioned by the House of Bishops and members of General Synod, he or she will be announced perhaps two weeks later, and installed – or, if necessary, ordained to the episcopate and installed – in Holy Trinity Cathedral, in Suva, on December 9.

The present diocesan Vicar General, The Ven Orisi Vuki, has been asked to continue in that role during the interregnum.

Archbishop Don Tamihere, meanwhile, will serve as the Archbishop's commissary at the October electoral college, and he will – as the constitution and canons require – exercise episcopal oversight until the new diocesan bishop is installed.

Archbishop Winston's farewells from Polynesia's episcopal units and archdeaconries will continue to roll out – in Viti Levu West, in Vanua Levu and Taveuni, in Tonga, in Samoa and American Samoa, and in the Diocese of Polynesia in New Zealand.

These are expected to conclude in New Zealand in mid-August.

[1] "Goodbye" in the Fijian language.

[2] A small carved waka; a paddle (carved from whale bone) and a carved fish hook – symbolic of journeying together, and being fishers of people.