St Matthew-in-the-City will not replace its vandalised billboard which portrays Mary looking at a home pregnancy test kit.

• How the world responded

• St Matthew's responds to the protests

• Reflecting on the character of Mary

• Magnificat for a broken world 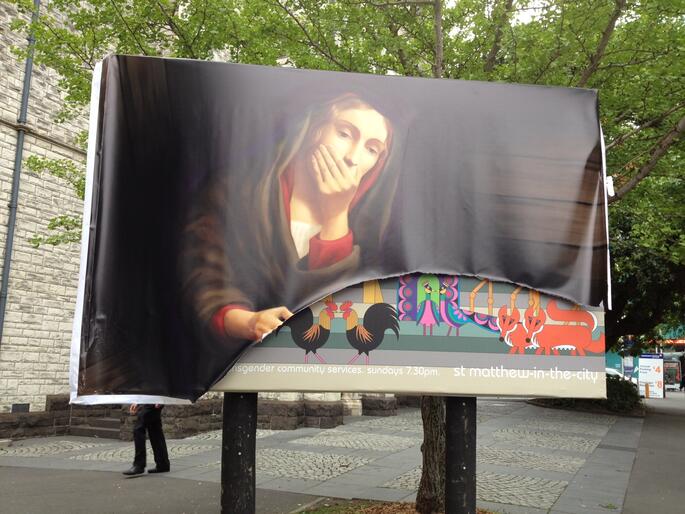 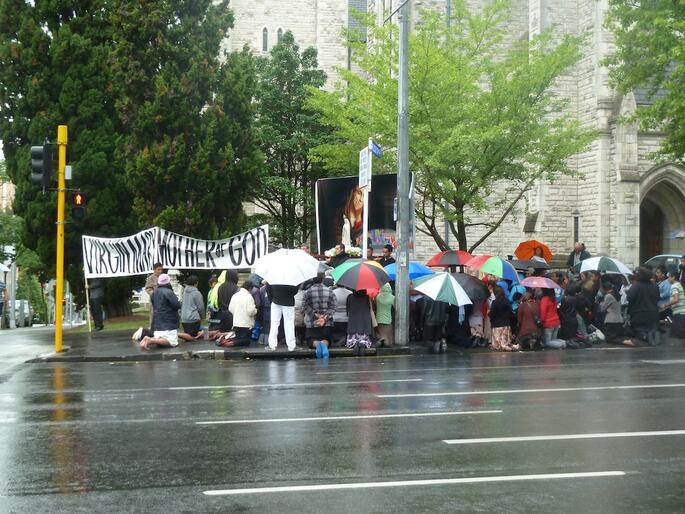 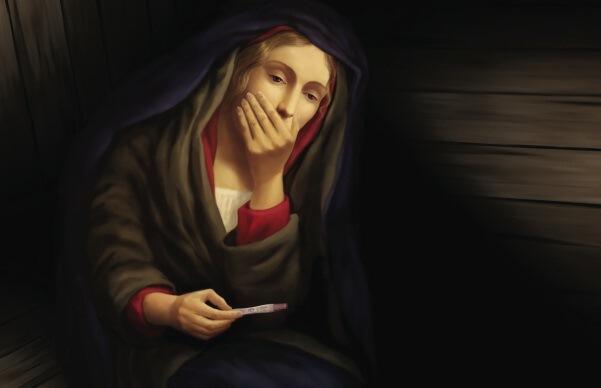 St Matthew-in-the-City will not replace its vandalised billboard which portrays Jesus’ mother, Mary, looking at a home pregnancy test kit revealing that she is pregnant.

The billboard was ripped in half by a Whangarei man leading a Catholic Action Group protest group.

Over 100 Catholics marched through Auckland protesting at the billboard, but the church says it has had positive feedback from around the world.

In a press release today, priest associate Clay Nelson said: "Our billboard ... pointed to the social circumstances of a young, poor, unmarried mother in first-century Palestine. It would have taken tremendous faith and courage to withstand the prejudice of her critics.

"We hoped that people would think of those in similar circumstances, and respond with kindness.

"Our billboard was ripped on Saturday evening by a group intolerant of any views on Mary except their own. Further, they made statements that this is the ‘devil’s work’.

"There is a sad and sick history in Christianity of demonising those you disagree with. It is of concern that such prejudice is present in New Zealand.

"We have decided not to replace the original billboard but let the current ripped one remain as a reminder of both the intolerance in Mary’s society and in our own."

Earlier, Mr Nelson said the original purpose behind the billboard was to spark conversation about Mary's possible response to the fact that she was pregnant.

"That discovery would have been shocking," Mr Nelson said. "Mary was unmarried, young, and poor. This pregnancy would shape her future. She was certainly not the first woman in this situation or the last."

Vicar Glynn Cardy added: “Christmas is real. It’s about a real pregnancy, a real mother and a real child. It’s about real anxiety, courage and hope.

“Although the make-believe of Christmas is enjoyable – with tinsel, Santa, reindeer, and carols – there are also some realities.

“In this season we encourage one another to be generous to those who suffer, to give to strangers, and to care for all – especially those who have the least. Like the first Santa, St Nicholas did.

“We invite all who celebrate the season to hold these different strands of a real Christmas together: anxiety and joy, suffering and compassion, Santa and Jesus.”