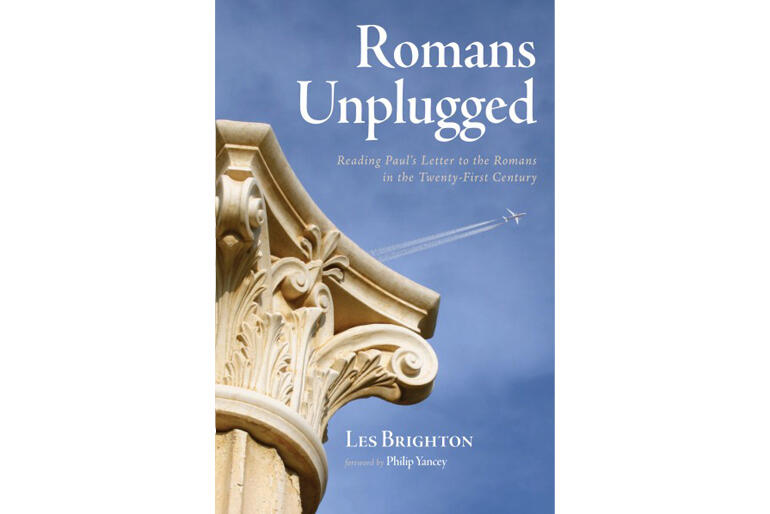 In the introduction to his handsomely produced book, ‘Romans Unplugged,’ author Les Brighton opens with the story of a minister who visited a miner’s home and found him reading Paul’s Letter to the Romans. When the minster returned a month later, he found the miner still studying the same text. When he remarked on this, the burly miner replied, “Son, I’m putting a shaft down here” (xix).

In ‘Romans Unplugged’ author Les Brighton has dug down deep into the first eight chapters of Paul’s letter to the Romans, by carefully, thoughtfully, and powerfully drilling into Paul’s arguments.

In this book written for “ordinary, thoughtful Christians,” Brighton writes in clear, well-expressed prose that tackles difficult concepts in a forthright way and engages the reader. He frequently emphasises the spoken qualities of the letter to the Romans, noting it was dictated as an argument meant to be heard rather than read.

Brighton’s own style speaks to the reader in a similar way. He brings to light the deeper meanings of the text and laces his exposition with pertinent and telling anecdotes. Neither is he afraid to be honest with how his own spiritual struggles relate to Paul’s words.

The book spirals around Paul’s themes in the first eight chapters of Romans, which makes for some repetition, but also gives a clear picture of how Paul understands God’s grace as a return to full humanity in relationship with God.

Brighton shows how Paul places all of fallen humanity in the same boat: both “the Jew” – whom this book names as “good faithful religious folk” (even “already Christian”) – and “the Greek” he names as all those considered ‘unbelievers”.

In Brighton’s reading of Paul, God has no favourites we all need rescuing – like an astronaut untethered from their spacecraft and drifting into space. But God will not leave us to our own devices, he says, God will not let us drift away.

Brighton is caught up in the glory of the promises of God to us in Paul’s writing – and the reader cannot help but be caught up too, as Brighton revels in Paul’s vision of God’s generous, grace-filled gift.

While this book sets out to be accessible to anyone rather than a text intended for academic study, there are thorough endnotes following each section the author has delved into (Romans 1-3; 4-6 and 7-8).

Brighton has provided his own translations of the Greek text, which he justifies in theological terms in his section endnotes.

I am not entirely convinced by Brighton’s definition of “Jew and Greek” and would have liked to know what the author would have made of Romans 9 -11, where Paul addresses the fate of his own Jewish people.

To sum up, this is a rich book that will instruct preachers and offer a lively and moving exposition of Paul’s letters for ordinary Christian readers.

ROMANS UNPLUGGED: READING
PAUL’S LETTER TO THE ROMANS
IN THE TWENTY-FIRST CENTURY