Wellington-based veteran peace campaigner, ecumenist and Anglican priest, Rev Dr Paul Oestreicher has been made an Officer of the Order of the British Empire for his lifetime of work advocating for peace, human rights and reconciliation. 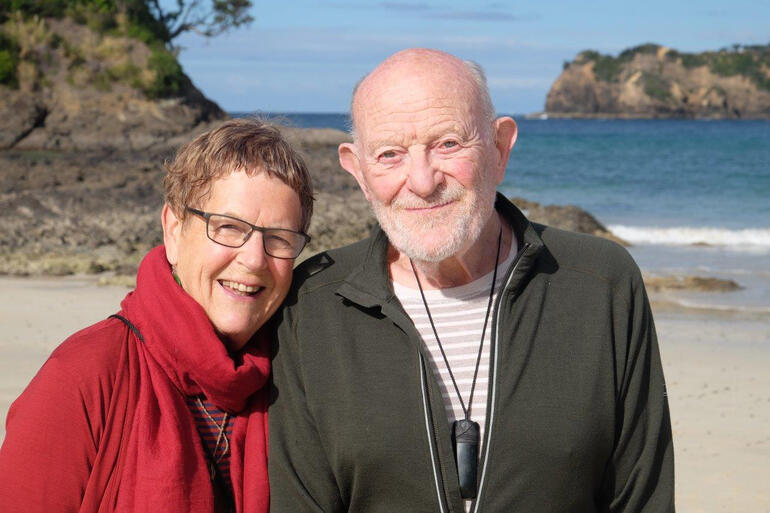 “For the OBE the Church Times ran a picture that puts me in context – I’m speaking at the #Occupy Movement outside St Paul’s Cathedral in London a few years ago.”

“That’s where I have been – on the church’s front steps, calling for human rights.”

Paul Oestreicher was born in Germany in 1931, but from 1939 onwards grew up in Aotearoa New Zealand, after his family was forced to leave their German home in 1938, due to the Jewish ancestry of his father.

Paul studied politics and German literature in Aotearoa New Zealand where as a university student, he founded the New Zealand Anglican Pacifist Fellowship together with Lance Robinson, son-in-law of renowned NZ pacifist Ormond Burton. Paul then moved to Europe where he studied Christian-Marxist relations in Germany, before training for the priesthood (1956-58) in the Church of England.

While he served in inner city parishes and ecumenical roles, Paul’s commitment to peace led him to promote pacifism and demilitirization throughout his life, especially through his leadership in the Campaign for Nuclear Disarmament (CND). He remains its Vice President in the UK.

Paul has advocated for human rights in the public arena over many decades, particularly through Amnesty International, which he chaired in the UK as far back as 1975-79.

Now aged 90, Paul Oestreicher lives in Wellington with his second wife Barbara Einhorn, a New Zealand academic whom he met in 1983 when Paul freed her from an East German prison. They married in 2002.

Paul Oestreicher was dubious of accepting the OBE at first, but believes it affirms others protecting human rights and working for an end to war.

“Giving me this honour late in life is a way of signalling, mostly to the church I think, that people who are on the critical fringe need to be affirmed.”

Paul Oestreicher has not only spoken out against war, but has put himself in places where he has actively built peace through relationships of reconciliation.

As British Council of Churches’ Secretary of the East-West Relations Advisory Committee in the late sixties he served a “parish” that stretched from East Berlin to Vladivostock. On one occasion during those years he joined the leadership of the Christian Peace Conference, only to be ousted for his public criticism of Soviet Government policies.

Paul Oestreicher’s commitment to reconciliation later led to his role as the British Council of Churches’ ‘foreign minister’ when he worked as its Director of International Affairs Division 1981-85. During that time Paul supported the anti-Apartheid movement, working alongside many Christian activists, including Archbishop Desmond Tutu.

Paul’s relationship with the Anglican Church undergirded his work for peace in many spheres, including his close working relationships with four Archbishops of Canterbury, especially Archbishop Michael Ramsey, whom he accompanied on visits to Eastern Europe.

“I owe the Anglican Church a lot, it gave me the base to do everything I did through the ecumenical movement...which was always more comfortable with radical actions than the established church.”

In Aotearoa, Paul’s Anglican story was not quite so straightforward. In 1985 he was elected Bishop of Wellington, after Archbishop Sir Paul Reeves had convinced him to stand. But Paul Oestreicher’s outspoken advocacy for human rights and his dual church affiliation as an Anglican and a Quaker, gave fuel to a conservative campaign to overturn his election. His electoral win was never ratified.

With leadership in Wellington out of the picture, Paul Oestreicher returned to the UK to become Head of Coventry Cathedral’s Centre for International Reconciliation. Later, during a visit to South Africa in 1990, he helped broker a peace deal between warring factions of the African National Congress and the Inkatha Freedom Party.

But no matter his past achievements, Paul Oestreicher is more interested in today’s campaigns for peace. In 2022 he has spoken out criticising Patriarch Kirill’s role in giving his sanction to Russia’s war on Ukraine.

“Right now there is a campaign to have the Russian Orthodox Church removed from the World Council of Churches for Patriarch Kirill’s support for Putin’s war.”

“In my opinion they should remain there, and be made to answer for their leader’s stance.”

“There is more atomic weaponry and atomic energy generation today than there has ever been. And it still presents enormous danger.”

Moving back to Aotearoa, and looking to the Pacific, Paul believes climate change presents another huge threat.

“Equal in importance to the peace debate is the ecological debate about the future of our world.”

“Our survival as a human race depends on both.”