The new dean for St John’s College comes from five years' teaching in one of the most famous theological colleges in the Anglican Communion. 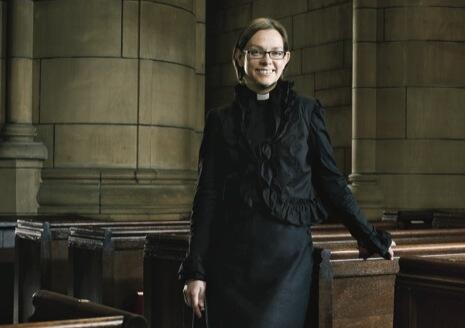 The woman chosen to lead Pakeha students at St John’s College from 2012 will arrive having completed five years' teaching at one of the most famous theological colleges in the Anglican Communion.

The Rev Dr Helen-Ann Hartley, who is presently Director of Biblical Studies and lecturer in the New Testament at Ripon College, Cuddesdon, near Oxford in the UK, has been chosen to succeed the Rev Canon (now Bishop) Jim White as Dean of Tikanga Pakeha.

Dr Hartley, 38, has been on the fulltime staff at Ripon since January 2008 – and she comes to St John’s with a warm commendation from the Principal of Ripon, the Rev Canon Professor Martyn Percy:

“Helen-Ann is a gifted theological educator and communicator,” says Dr Percy, “and will undoubtedly bring much energy and vision to this new post.“

She studied theology at the University of St Andrews, then did further postgraduate study at Princeton Theological Seminary in the US.

She went to Oxford to undertake further work in Jewish Studies and the New Testament, and completed her DPhil in 2005 by researching the portrayal of manual labour in Judaism and Early Christianity.

Helen-Ann Hartley is a regular contributor to BBC local radio, and is a consultant to BBC Television on the development of programmes in religion and ethics. She is also a member of the working group for theological education in the Anglican Communion.

Dr Hartley will not ariive at St John’s College as a stranger.

Helen-Ann Hartley is, according to biographical details on the Ripon College website, “particularly interested in hermeneutics and in encountering and reading the Bible in places of cultural complexity.”

Professor Martyn Percy says she will be missed at Cuddesdon:

“Over the last five years,” he says, “she has made a significant contribution to our national and international work, and as an important member of the team.

“We hope that even in this new role our bonds will continue to grow and develop, forging some new and exciting partnerships for theological education across the Anglican Communion.”

Helen-Ann Hartley is married to Myles, who is an organist and Director of Music at Harris Manchester College, Oxford.

Her appointment to fill the vacancy created by Jim White’s resignation was announced today by the Commissioner of St John’s College, Mrs Gail Thomson.

“We are really delighted,” said Mrs Thomson, “to have a person of Helen-Ann’s calibre join the faculty at this college.”

She will take up her position in the new year, at a date yet to be advised.