Anglicans in the Diocese of Wellington are hoping to give both people and planet a helping hand by backing fares-free public transport for Community Services Card Holders, under-25s and students. 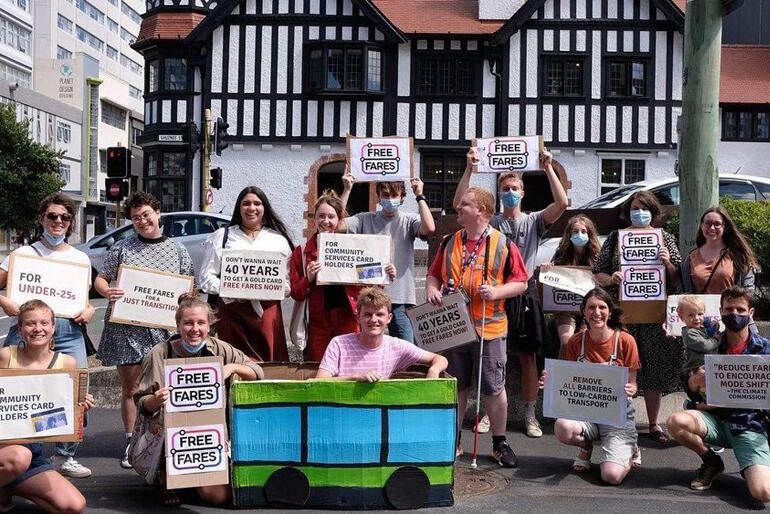 Anglicans in the Diocese of Wellington and throughout Aotearoa New Zealand are driving a new Free Fares campaign to advocate fares-free public transport for New Zealanders on low incomes.

The Free Fares campaign began last year in Wellington when a group of Christians, students and climate activists discovered they were united by the same vision of removing the cost barrier that stops people on low incomes choosing public transport.

Mika Hervel from St Michael’s Kelburn is one of the university students who lit the spark for the campaign which has now grown into a collective call nationwide.

“We realised that free public transport for disadvantaged groups presented a key opportunity for social and environmental justice.” Mika said.

The Free Fares team figured that as the Government considers its own fossil fuel reduction plans, what simpler way to get people out of their cars and onto public transport than by fully funding bus and train rides for people on low incomes?

Instead, how about building those fare costs into the Government’s own funding for climate change response?

As well as the environmental benefit of saving the fossil fuels use in private cars, the fares-free plan would lead to many other health benefits from the results of people's safer, more mobile lifestyles.

Fast forward to 2022 and the campaign group has a date with the Minister for Transport on 17 March, when they plan to present their petition of almost 10,000 signatures asking that the Government build their ‘Free Fares’ idea into this year’s budget.

Today many Anglican groups around Aotearoa new Zealand have joined the 60+ organisations who support the campaign, including Wellington City Mission, Christchurch City Mission, The Freestore and individual churches.

One of those signed-up churches is Blueprint, a church in the Diocese of Wellington.

“Backing this campaign is an act of worship – a way I can follow Jesus’ call to love those in my neighbourhood and to care for the planet that God loves.” said Blueprint leader Rose Robinson this week.

Auckland’s Anglican Trust for Women and Children is also strongly backing the campaign for its instant social benefits,

“Free public transport for the whānau we work with would be life changing. It would break down systemic barriers that currently exist for the most vulnerable in society...”

The campaign has also enabled Anglicans across the country to work together, with Anglicans from Auckland, Wellington, Nelson and Christchurch now joining the organising team.

Nathan Hughes from the Diocese of Nelson is right behind the campaign,

“I support free fares because it's a beautiful initiative dreamed up by young people who love Jesus and are passionate about climate change. By supporting their efforts we’ll (hopefully) see emissions reduced in our neighbourhoods and public transport made accessible to all.”

“[Free fares is] about longer-term attitude and behaviour change, and that’s what we desperately need for addressing climate change.”

“But mostly for me it’s because the cost of living and housing is causing desperation for an increasing number of people. …Free Fares makes moving around the city fair. ...Rebates on electric vehicles are good, but it’s the poorest contributing to the richest transport option. Free fares balances that out.”

The Anglicans behind the Free Fares Campaign are keen to invite as many Anglican communities on board as they can.

To join this call for public transport equity as a group, pariha, church, diocese or hui amorangi you can join via the Google form for groups, individuals can sign and share the petition this week, and you can email freefaresnz@gmail.com to find out more about how you can help.