Christchurch may get an interim cathedral made of cardboard as soon as February.

• Damaged bells may be heading for England 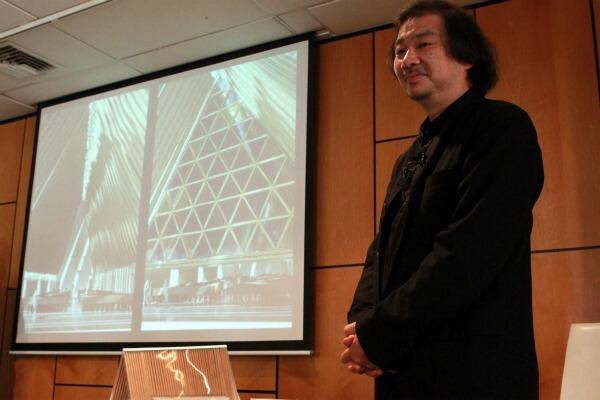 Christchurch may get an interim cathedral made of cardboard as soon as February next year.

A feasibility study for the $4m project, which would seat 700 people, was launched in the upmarket George Hotel this afternoon.

Shigeru Ban, an eminent Japanese architect, unveiled plans for an A-shaped structure made of cardboard tubes and polycarbonate, with shipping containers as foundations.

A triangular stained-glass window, to be designed locally, surmounts the front entrance.

Introducing the architect, Dean Peter Beck said he hoped the relocatable cathedral would be ready for the first anniversary of the February 22 quake.

A site has yet to be found but Dean Peter said it would be in the inner city, "offering a sign of hope and confidence and a thing of beauty in the midst of all the desolation."

As well as regular worship, the cathedral would accommodate orchestral, choral and community events.

"We're pitching a tent in the city centre," Dean Peter beamed. "And it will do all that the cathedral used to do, plus more."

The planned capacity seating of 700 could be extended to 1000 – but at additional cost, he said.

Shigeru Ban has built temporary homes, schools, shelters and a cathedral in disaster zones across the world, including Rwanda in 1994, Kobe after the 1995 earthquake, Turkey in 1999, and Haiti last year.

He works on such projects for free, choosing to serve the general public rather than those "with power and money."

The most important criterion "is whether people love the building."

Shigeru Ban told his audience today that cardboard was an ideal building material "because it's readily available, recyclable and surprisingly strong."

It's also weatherproof and fire-resistant, and may last for up to 15 years.

An X factor in the project, moreover, is that the 8cm-diameter tubes are pieced together so simply that volunteers can lend a hand.

A major question for music lovers has to be the acoustic qualities of cardboard, but Ban said the insulation material offered "very good" results even though it was not designed for music.

His audience – comprising many of the city's movers and shakers – responded enthusiastically, auguring well for the test that lies ahead.

The Canterbury Earthquake Recovery Trust has granted $50,000 for the feasibility study, including a business plan for raising the full cost of $4m.

Meanwhile, Air NZ is meeting the fares of Mr Ban and his assistant Yoshie to and from Japan.

The project arises from an internet search by two of the cathedral staff – development manager Craig Dixon and theologian Lynda Patterson.

Looking to the longterm future, he pledged that Cathedral Square would again reside at the heart of the city.

"It won't look the same but our vision is that the cathedral should be the tallest of buildings, pointing to the heart of Christchurch."