One of Gisborne's hidden treasures is to be restored for the whole community to enjoy. 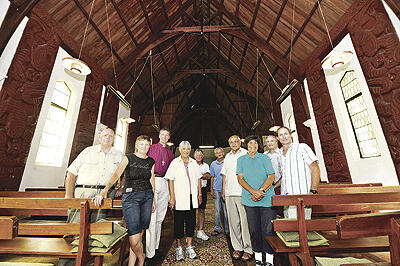 One of Gisborne's hidden treasures will be brought into the light and restored for the whole community to enjoy.

The Manutuke community is embarking on a $1m mission to bring Toko Toru Tapu Church back to its former glory, to take its rightful place as one of the icons of this district’s early bicultural history.

With the first $100,000 raised, members of the vestry and other supporters launched the project with the blessing of Archbishop Brown Turei and Bishop David Rice, who view the building as a tapu place where people are still nurtured.

Tucked off the main road alongside the Maori Battalion Marae at Manutuke, Toko Toru Tapu is one of the few carved churches in New Zealand.

But what makes it truly unique is the nature of those carvings, which are quite distinct from others of the era.

They are the result of a clash between the patriarch of Christianity in this district, Anglican missionary William Williams, and the patriarch of local carving, Rahuruhi Rukupo of Rongowhakaata, now regarded as the most famous of the great carvers of the
19th century.

Although the house was taken, some of his carvings for the original church have been repatriated to Toko Toru Tapu by Te Papa, although they are on display in Tairawhiti Museum.

They are in a style now known as Te Pitau a Manaia, which came about because the initial carvings Rukopo executed for the church were in the traditional phallic style and included Maori Gods, which offended William Williams.

The less representational patterns were carried over into the kowhaiwhai designs in the church, which still flank the altar.

The new church was built in 1913, in the traditional English style in bricks and mortar, decorated in Rongowhakaata style.
For many years it was the focal point of Manutuke village, its bells tolling on every special occasion.

Archbishop Turei still remembers how they rang the New Year in every year – until the bell crashed down, the victim of rotting timbers.

The church was reroofed but without the bell tower.

It will be restored by the Clark family, whose nearby Opou Station has always had a close association with the church.

Others associated with the old church have already contributed more than $100,000 towards the restoration fund, which was started with a $36,000 donation from arts benefactor Professor Jack Richards, followed by generous donations from the Williams family trust, the Clark family trust, the late Gwen Jones and local farms such as Arai Matawai.