The first Bishop of Te Tai Tokerau, Bishop Ben Te Haara ( Waiohau Rui Te Haara) has died at his home in Rāwhiti in the Bay of Islands aged 88. 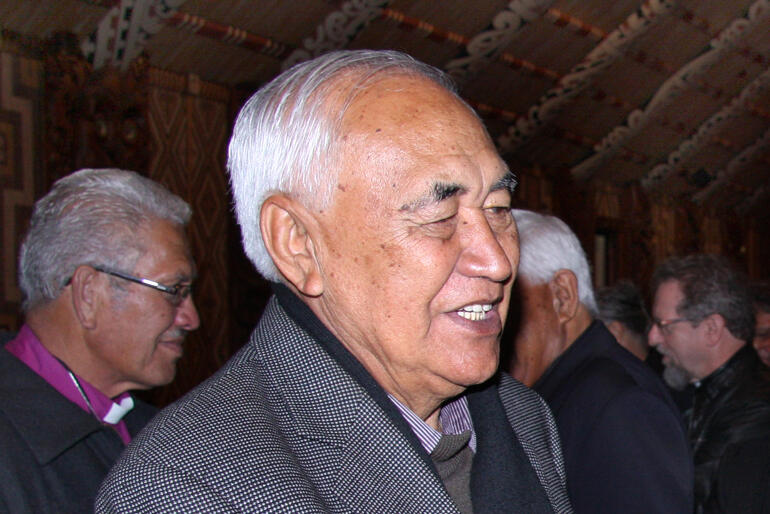 Bishop of Aotearoa, Archbishop Don Tamihere recounted this week how widely respected Bishop Ben Te Haara has been as a minister, church leader and kaumatua.

“He was a priest from the old school - devout, humble and gentlemanly in all that he did.”

“He was gracious and kind, never condescending, always encouraging… He impressed upon us how important it was to strive to be Christ-like in all that we did.”

General Synod Te Hīnota Whānui member for Tai Tokerau, Anne Candy wrote this week on how Bishop Ben’s approachable nature enabled him to minister to all,

“Bishop Ben was an astute and visionary Bishop with an all-encompassing grace and sharp wit that made one feel comfortable in the presence of greatness.”

“He shared Christ's love in a humble yet powerful way, and we unreservedly gave him our love, because he walked so comfortably alongside each one of us.

Growing up on a dairy farm, Ben Te Haara’s social life revolved around Ohaeawai marae near his home midway between Hokianga, Pahia and Waitangi. He also grew up very close to the local Anglican Church, which played a big role in country life.

Coming out of school, he worked as a fisherman and then as a mechanic in the clothing industry, but first felt the call to ministry when he attended the tangi of his childhood priest, Rev Paki Matene. Later he was moved toward ministry again, when he encountered the social problems faced by workmates who were missing their factory shifts.

It took Ben Te Haara a whole year of 7am Sunday altar service before the vicar of Kaikohe would let him share his call to ministry with then Bishop of Auckland John Simkin. But after testing his resolve with silence, Bishop John sent the young Ben Te Haara to St John’s College in Auckland, where he studied between 1958-1961 towards a Licentiate in Theology.

Bishop Ben was ordained deacon in the Diocese of Auckland in 1961, and priest in 1962, and a few days later he married his beloved wife Gwenneth Hansen. They stayed in Auckland while he served curacies at St Barnabas Mt Eden, and then moved to Northern Wairoa between 1964-67, before Ben became Vicar of Coromandel, where he enjoyed ministering for four years.

Moving back to Auckland, Ben Te Haara worked as Vicar of Selwyn Church and was part of a team ministry in the parish of Mangere over the nine years 1971-1980. During that time he worked in the 'J-team' - a partnership between Police, Social Welfare, Māori Affairs and clergy who worked to provide alternatives for young Māori in Mangere.

Historian of Te Haahi Mihinare Rev Dr Hirini Kaa says Bishop Ben Te Haara was an inspiration to him growing up in the church, and he played an important role in helping build a church turangawaewae for the large numbers of Māori who were migrating into Auckland in the 1970s and 80s.

“In his work supporting Māori coming into Auckland, in building Te Karaiti Te Pou Herenga Waka church and as Bishop of Tai Tokerau, he was working to help Māori retain our mana motuhake, not only our self-determination, but maintaining our identity and establishing our own ways.”

In the early eighties, Bishop Ben served as chaplain for the Auckland City Mission, during which time he worked with Rev Don Cowan to convert the old Prince of Wales Hotel into a night shelter and shops to serve the mission. He also trained in drug rehab counselling and helped establish the Mission’s Drug Detoxification Centre.

Moving on from the City Mission, he shifted south to work for Bishop Whakahuihui Vercoe in Rotorua, where from 1982-87 he was Vicar of Ohinemutu and ministered in Te Ngae, Te Puke, Tauranga and Taupo serving as a Minita-a-iwi across the Waiariki Rohe.

Beginning in 1984 while in the Bay of Plenty, Bishop Ben took on the role of supporting the Pīhopatanga o Aotearoa as Vicar-General, a role he continued up till his retirement as Bishop of Te Tai Tokerau in 2001.

For two years in 1987-88 Ben Te Haara was Secretary to the Pīhopatanga o Aotearoa, serving between Rev John Paterson and Charles Hemana’s terms. Bishop Ben served on the Prayer Book Commission and produced resources to help the church to worship in Te Reo Māori.

For the final three years of his ministry before becoming Bishop of Tai Tokerau in 1992, Ben Te Haara served as Archdeacon of Aotearoa, and held responsibility for enabling Māori ministry in the north as Taonga Whakamana Mahi Minita.

Following his death on Tuesday this week, Bishop Ben lay in state at Ngāwhā Marae near Kaikohe before being brought to Rāwhiti Marae near Russell, where his tangi was held at 10.30am yesterday.

Bishop Ben has now been laid to rest at Te Araka Urupā in view of Oke Bay, alongside his mother and his late wife, Gwenneth Te Haara.

He is survived by his two children and their partners: Kerry and Daniel, Mark and Sharron, and their tamariki mokopuna.