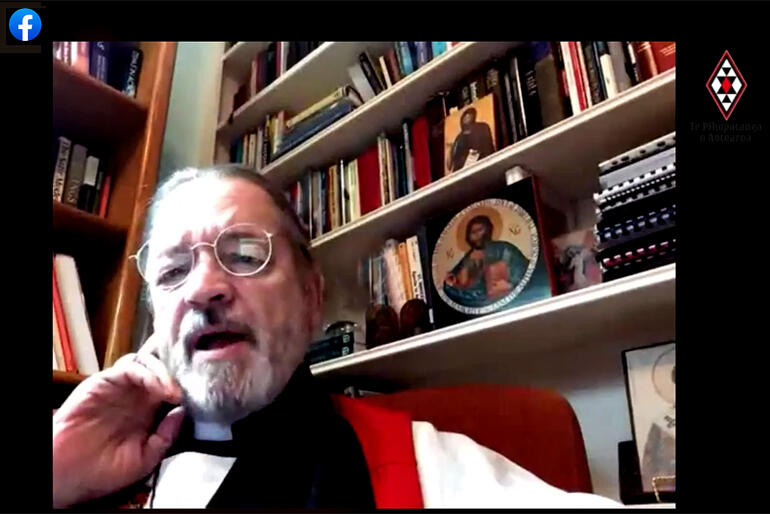 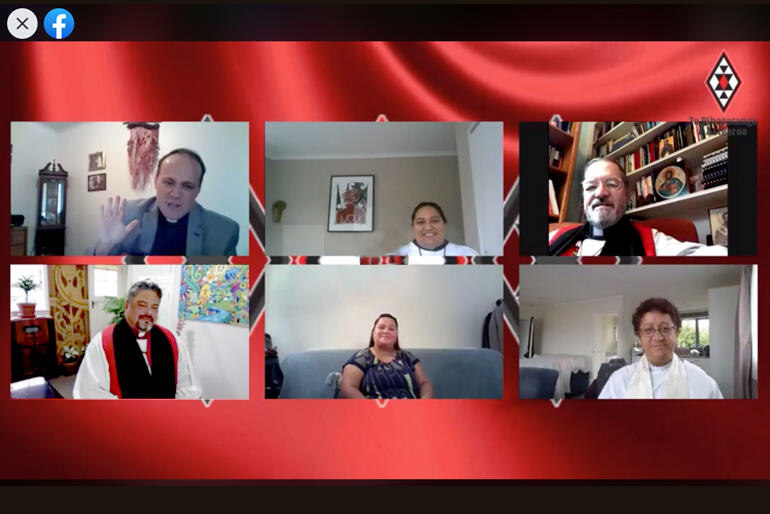 Online prayer with the Pihopatanga went global this week as Archbishop Mark MacDonald zoomed into Sunday’s Facebook-hosted Eucharistic service from Toronto on 3 May, to share his reflections on the Good Shepherd.

Archbishop Mark spoke to a congregation of around 3500 who watched Sunday’s service from numerous places around Aotearoa and the Māori diaspora. He opened with a word on the difference between the image of the Good Shepherd hoped for by the missionaries, versus the “Untamed Shepherd” that the people of the land had known and followed.

Archbishop Don enjoyed having Archbishop Mark join the Pihopatanga in their increasingly popular weekly services that have been taking since soon after the pandemic Level 4 lockdown began.

“The viewing stats show people from all over the world are watching these services - including from Asia, the USA, the UK, Africa, Latin America and the Pacific. That shows that we have whānau around the globe that are keen to connect with Te Pihopatanga o Aotearoa in this way.”

“We've never really had the staff or resourcing in the past to focus on providing live services before, but the lockdown has forced us to go that way, using what little technology we had.”

“It's turned out to be a blessing, and there's huge support for us to continue and develop those offerings further.”

Over the weeks of virtual services Archbishop Don has appreciated the support of many contributors from across the country, including: Rev Wiremua Anania and his wife Sophie and their children, Rev Tamsyn Kereopa, Ms Susan Wallace, Rev Vianney Douglas, Rev Cruz Karauti-Fox, who he says along with other Māori bishops, have pitched in to make the online worship services welcoming and fun.

The Pihopatanga services’ biggest local audiences have been in Auckland, followed closely by Tairāwhiti, Waikato, Hawkes Bay, Wellington and Christchurch.

Archbishop Don is grateful too for the support the services have received from other communities online.

When the Pihopatanga services go live on Facebook each Sunday, they are shared and carried live by: Creative Natives, Protect our Whakapapa, Te Rūnanga a Iwi o Ngāpuhi, Piata Mai Otepoti, MANA Movement, Waikato Tainui and the Kiingitanga pages.

“This multiplies the reach of our services exponentially, and shows the potential our communities have when they network online.” said Archbishop Don.
“Going forward the kaupapa remains the same for us - we want to share the Gospel, bless and uplift people, and hopefully inspire them to be forces for good among their own whānau and communities.”

To view the service, including Archbishop Mark delivering his sermon, go to the video on the Pihopatanga O Aotearoa Facebook page.

Archbishop Mark’s reflection focused on the shepherd-like leadership and wisdom he observed in the late Rev Paul Tritt, an elder, community leader and priest of the Gwich’in people in the Northwest Territories of the Arctic region of Turtle Island (North America).

An excerpt from a sermon by Archbishop Mark MacDonald, 3 May 2020.

The Good Shepherd was a favourite of the missionaries who came to Turtle Island, who hoped the image would “tame” the people of the land.

The Good Shepherd was popular title for many indigenous churches… that was a name given by missionaries, who liked the title Good Shepherd, because of John 10: 16 which says:

“I have other sheep that do not belong to this fold. I must bring them also, and they will listen to my voice. So there will be one flock, one shepherd.”

The missionaries primarily saw this image as a way of taming indigenous people – making them western, which in many cases meant making them into good Englishmen.

They used this image to try to tame people, but I think what has happened is the opposite. It is an image that doesn’t tame us at all, in fact we are ‘untamed’ by it.

I want to look at another way of looking at the image of shepherd, this one comes from Gwich’in culture, in a word they use for leadership: ho’oda’in.

This word describes the person who was chosen by the people to guide them when they were on a hunt.

So this person would go up the hill before the people to see where they would go and would tell them which way to go. Now the people had to trust the vision and the wisdom and insight of that person to lead them. And sometimes it might be counter to what people expected or wanted.

I got to see an example of this in the late Rev Paul Tritt, he was one of three sons of the great Gwich’in prophet Albert Tritt from Arctic village. Paul was the chief, and also the priest of Venetie in Alaska and he was an extraordinary leader it was my privilege to work with him he had a great vision. He had lost his arm due to an infection, he was a great hunter, but he was limited in what he could do.

He passed away and I was able to attend in him Fairbanks Alaska when he was sick. It was an extraordinary experience it was seeing someone who had the spiritual power to give up the ghost. He knew when to die and he had talked a lot of having dreams when his arm was back. It was a stunning thing.

I went with him, with his body, to Venetie for the burial. At that place I noticed once again that Paul’s house was the biggest cabin in the community.

So I said to one of the young men, as we were standing there, so did you build Paul the biggest house in town because he was your chief and your spiritual leader? And he said you know it’s funny – He built it.

And then he said, Yes it was strange, because he started it after his wife got sick. And we wanted to help him, but he wouldn’t (let us). And it was hard to watch him, a man in his eighties, cutting down trees and carrying them with one arm. Then after he finished it and we were having the blessing, we asked him, “Grandfather, uncle, why wouldn’t you let us help you?” And here he was in his eighties and doing all this by himself.

And he said to them, something that has stuck with me ever since. “I am an old man, and I don’t have much time here, but this house will live way beyond me, and you will see it.” And he said:

“When the young people in this community walk by, and they see this house, they will remember that an old man with one arm built it by himself – and they will know that they can do anything that they set their minds to.” This is a story of ho’o da’in.

Someone who sees ahead and indicates where the people should go.

This is a story that is a kind of equivalent of the idea of shepherd. I guess what I’m trying to say is that the shepherd that Jesus talks about has been present among our peoples since the beginning of time. His voice did not appear when the missionaries came – his voice was powerfully present. And I think we can learn something that’s important here, something about our past, and even more importantly something about our future.

It’s by the way, controversial to some people, some people don’t think that this voice was  present prior to the advent of the missionaries, but we know differently. I would say however that the more important thing for us –right at this moment, right at this time – is that The Good Shepherd and the Good Shepherd’s voice is present in our future, and leading us right here and now today.

We, here, worry about our young people, we worry, now today, we worry about our elders and their vulnerability, in so many ways in the world in which we live, but we must understand the power and the presence of the Good Shepherd, the voice that leads us.

And as I was preparing to think of this I thought of something that had I read, from someone who inspired me a great deal, and that is the great Māori prophet, and I wanted to read something because I think it has something to do with today. Te Whiti said,

“The governments of the earth have built up a structure that exists only by the power of money….

From the highest to the lowest, money is the motive force, strike away this prop and the confusion that would result could only be compared to that which eventuated at the building of the tower of Babel.

I have built up my power by the force of my will. No worldly considerations effect my followers, they are disinterested, they are superior to the power of money, their thoughts are raised from earthly cares to soar in the realms of bliss.

Their hearts are being purified in anticipation of the great day that is at hand.

I have a uniform distinct path that I travel continuously.

‘Peace and goodwill to all’ is the password, the wayfarers are clothed in love and charity. The end to the journey to those that enter it is joy everlasting.”

I think these are really powerful words to hear today.

We are seeing the power that money has held, the way in which it has beguiled and hypnotised people is being cracked by the pandemic around us.