The Archbishop of Canterbury and the Pope affirm the bonds of friendship and love between Roman Catholics and Anglicans.
• Read both addresses in full 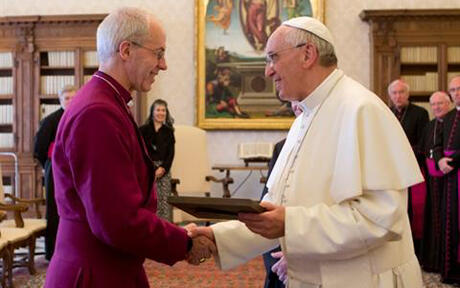 The Archbishop and the Pope affirmed the bonds of "friendship" and "love" between Roman Catholics and Anglicans when they met for the first time in Rome on Friday morning.

In their first meeting, Archbishop Justin and Pope Francis both spoke of the bonds of "friendship" and "love" between the Roman Catholic Church and the Anglican Communion.

The two leaders agreed that the fruits of this dialogue and relationship have the potential to empower Christians around the world to demonstrate the love of Christ.

The Archbishop and the Pope agreed on the need to build an economic system which promotes "the common good" to help those suffering in poverty.

Archbishop Justin said that Christians must reflect "the self-giving love of Christ" by offering love and hospitality to the poor, and "love above all those tossed aside" by present crises around the world.

The Pope said those with the least in society "must not be abandoned to the laws of an economy that seems at times to treat people as mere consumers".

They also agreed on the need for Christians to act as peacemakers around the world, which they acknowledged could only be done if Christians "live and and work together in harmony," the Pope said.

Archbishop Justin, who has been deeply influenced by Catholic social teaching and intends to focus on healing divisions in church and society as part of his ministry, told the Pope: "I pray that the nearness of our two inaugurations may serve the reconciliation of the world and the Church."

The Pope, who said their closeness of their inaugurations meant "we will always have a particular reason to support one another in prayer", said the meeting was an opportunity to remember that the search for unity among Christians is not prompted by practical considerations, but by Christ, "who made us his brothers and sisters, children of the One Father."

The Archbishop, who was accompanied by his wife, Caroline, visited the tomb of St Peter beneath the Basilica before praying at the tomb of Pope John Paul II. He was also joined by Archbishop Vincent Nichols, as well as Archbishop David Moxon, his representative to the Holy See.

After meeting Cardinal Kurt Koch, president of the Pontifical Council for Promoting Christian Unity, the Archbishop met the Pope at the Apostolic Palace. The pair held a private conversation, before giving public addresses and attending a service of midday prayer together.

In his address to the Pope, the Archbishop praised the work of popes and archbishops of Canterbury over the past 50 years to bring the Roman Catholic church and the Anglican Communion closer together.

Honouring the custom for archbishops of Canterbury visiting the Vatican, Archbishop Justin wore the episcopal ring famously given to Archbishop Michael Ramsey by Pope Paul VI in 1966.

The ring, which Archbishop Michael wore until the day he died, is kept at Lambeth Palace and has become a symbol of fraternal love and efforts towards reconciliation between Roman Catholics and Anglicans.

Recalling the words of Pope Paul VI to Archbishop Michael, the Archbishop told Pope Francis: "I am coming to a place where I can feel myself at home."

'Love for the poor'

Archbishop Justin told the Pope that they must promote "the fruits of our dialogue".

He continued: "And, with our fellow bishops, we must give expression to our unity in faith through prayer and evangelisation. It is only as the world sees Christians growing visibly in unity that it will accept through us the divine message of peace and reconciliation."

Both the Archbishop and the Pope acknowledged that differences between Roman Catholics and Anglicans have caused pain in the past and would present challenges in the future.

But the Archbishop said that a firm foundation of friendship "will enable us to be hopeful in speaking to one another about those differences". Meanwhile the Pope said recent decades had been marked by "a journey of rapprochement and fraternity".

Suggesting further areas of common focus between the two leaders, the Archbishop spoke of the need for Christians to demonstrate "the self-giving love of Christ" in hospitality and love for the poor.

"We must love those who seek to oppose us, and love above all those tossed aside—even whole nations—by the present crises around the world.  Also, even as we speak, our brothers and sisters in Christ suffer terribly from violence, oppression and war, from bad government and unjust economic systems.  If we are not their advocates in the name of Christ, who will be?"

Archbishop Justin presented Pope Francis with the motto of the Pope - 'Miserando atque eligendo' - in gold letters on vellum.

The motto, meaning lowly but chosen (literally in Latin, 'by having mercy, by choosing him') is a quote from an English Church Father, Bede, whose 'Ecclesiastical History' charts the union of the different strands of British Christianity relating in and through Rome to the Universal Church.

• Read both addresses in full