The Archbishop of Canterbury has met with survivors of Canada's residential schools to apologise for the evils of Anglican residential schools. In his apology, ++Justin Welby has committed to walking alongside indigenous peoples to listen and repent, as well as encouraging the Anglican Communion to provide practical support to their aims.
• 'Apologies are cheap unless accompanied by action' 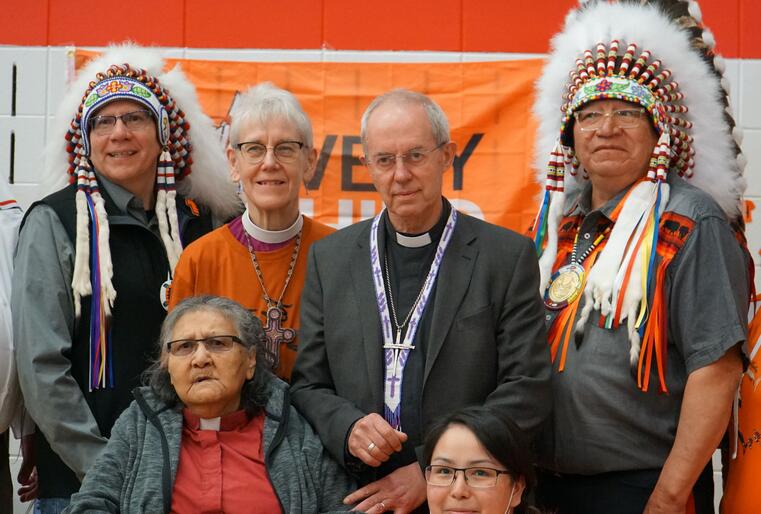 The Archbishop of Canterbury has apologised for the “terrible crime” of the Anglican Church’s involvement in Canada’s residential schools – and for the Church of England’s “grievous sins” against the Indigenous peoples of Canada.

The Archbishop spent this weekend visiting Indigenous Canadian reserves, meeting with Indigenous leaders and Anglicans, and listening to residential school survivors, as part of a five-day visit to Canada.

Addressing survivors and Indigenous elders in Prince Albert on Sunday, the Archbishop said: “I am so sorry that the Church participated in the attempt - the failed attempt, because you rose above it and conquered it - to dehumanise and abuse those we should have embraced as brothers and sisters.”

He added: “I am more than humbled that you are even willing to attempt to listen to this apology, and to let us walk with you on the long journey of renewal and reconciliation.”

The Archbishop is visiting Canada to repent and atone for the Church of England’s legacy of colonialism and the harm done to Indigenous peoples – and to share in the Anglican Church of Canada’s reconciliation work with Indigenous, Inuit and Métis communities.

On Saturday the Archbishop visited James Smith Cree Nation in Saskatchewan, where he met with local chiefs and listened to the stories of residential school survivors. The Archbishop also joined a Gospel Jamboree – an indigenous expression of faith that nurtured communities when traditional practices were banned under colonial law.

Apologising to the survivors after hearing their stories, the Archbishop said the abuse they had experienced in residential schools was “a terrible crime”:

“That bit of hell was built by the Church and in the name of the Church. For that terrible crime, sin, evil, of deliberately, consciously, stupidly - because evil is stupid - building hell and putting children into it, and staffing it - I am more sorry than I could ever, ever begin to express. That is both personally and in my role as Archbishop of Canterbury… I am more sorry than I can say. I am ashamed. I am horrified. I ask myself where does that come from, that evil? It has nothing, nothing, to do with Christ.”

On Sunday the Archbishop attended an Indigenous gathering in Prince Albert where again he heard stories from residential school survivors, and their children and grandchildren. Extracts from his response to that gathering follow:

“I am here today with a heart filled with a sense of darkness, shame and sadness, to acknowledge the hurt done to your people. To apologise for the damage caused to your communities… and to recognise the grievous sins of the Church of England in its historic form against the First Nations, the Inuit and the Métis people of Canada. Sins of racism and discrimination. The greatest evils we can face.”

“I wish again, truly and deeply, and with humiliation and humility, to apologise for the broken relationship between the Church of England and the First Nations, the Inuit and the Métis peoples of Canada. We did not fulfil our historic commitment to be an advocate, ally and relative for you. Instead of standing with you, we abandoned you.

“Instead of advocating for you, we became complicit in, and often directly responsible for, residential schools - uninspected, unsupervised, uncriticised, unchallenged in the cruelties they handed out indiscriminately to the most innocent and the youngest. The isolation of people groups on reserves. In the midst of great poverty, the Church shrugged its shoulders and contributed to further hardship.”

“I know you carry the weight of generations of grief and trauma. I know that the residential schools and the church at times sought deliberately to do what in the Bible is condemned, which is to break down the memory of generations so you lose your identity. I am so sorry that the Church participated in the failed attempt - because you rose above it and conquered it - to dehumanise and abuse those we should have embraced as brothers and sisters.

“I am more than humbled - I find it unbelievable - that you are even willing to attempt to listen to this apology, and to let us walk with you on the long journey of renewal and reconciliation. It will not be an easy or quick journey, but I commit to walking with you for as long as the Lord gives me strength so to do.”

The Archbishop said he understood that “we need to match action with words”. He made several commitments that he said would be pursued “in partnership so that I can learn more from you about what you would want that shared future to look like.”

These include encouraging a commitment to Indigenous rights and to learning from Indigenous spirituality across the whole Anglican Communion. And finding ways to further raise Indigenous issues with the United Nations, working with the Anglican Indigenous Network.

The Archbishop is visiting Canada at the invitation of the Primate of the Anglican Church of Canada, Archbishop Linda Nicholls. The visit, which concludes tomorrow, reflects the priority that Archbishop Justin Welby has placed on reconciliation during his time in office.