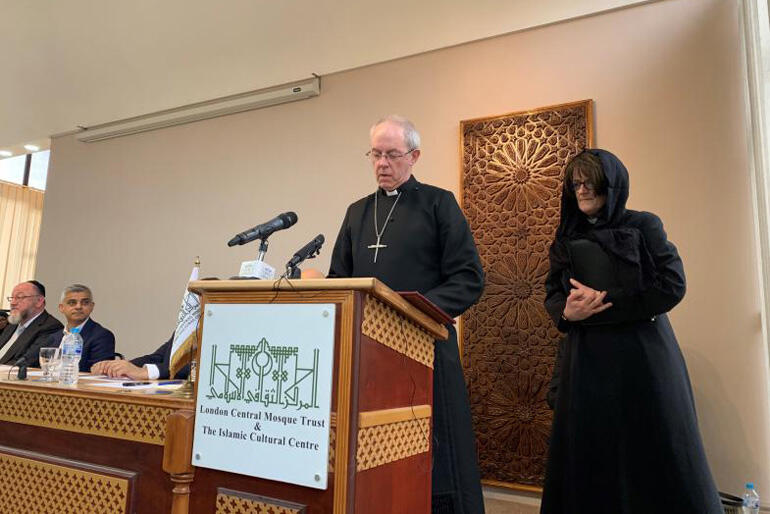 The Archbishop of Canterbury praised New Zealanders’ response to the Christchurch tragedy and promised an increase in efforts by the Church of England to build peace and show visible signs of unity between Christians and Muslims in the UK.

The full text of the Most Rev Justin Welby’s address to the assembly gathered at Regent’s Park mosque follows:

Much of what I was going to say has already been said.

The killings in New Zealand are monstrous. The response of New Zealand, all its people, with Muslims in the forefront, is beautiful and inspiring.

For British Muslims who are feeling under threat, we are with you. Hatred of Muslims denies and blasphemes Christ. Those who co-opt Christian language and history for hatred commit blasphemy.

We will work with Bishops in the Church of England to see how we can be more effective in visible signs of togetherness.

We educate one million children in Church of England schools and have 8000 clergy. We will renew what we do in our Near Neighbours scheme. We will work with bishops to see how we can be more effective in dioceses.

I commit myself to listening more and putting this higher up the agenda in my own actions and words.

The event in New Zealand is a wake-up call to renew civilised discourse in public life and on social media. I know that my good friend Cardinal Vincent Nichols, who is unfortunately unable to be with us today, is one with me when I say that faith and obedience to God are part of the solution to the challenges of extremism and it is working with faith communities that we will tackle this problem. It’s shown by the fact that people from so many faiths are standing together here in solidarity. The attacker wanted to create a war against Islam; he generated human unity.

Jesus taught his followers to be peacemakers, “for they will be called children of God.” Making peace is an action, it doesn’t just happen. It requires us to be curious, to listen, to move across differences of culture, ethnicity, religion and politics in love. Hate crimes against those who are different have no place before God.

We stand together for you are us, and we are you, together in the hands of the creator and judge of every person. May God protect and strengthen you.

Salaam alaikum, peace be upon you

We are deeply moved and grateful to know that you are gathering to express solidarity with our Muslim brothers and sisters; those who have been slain so brutally and senselessly, those critically injured, their families and friends and indeed with the whole of our small island nation.

As you gather we will also rise and light a candle and pray with you. We continue to pray for our slain and injured neighbours, members all of the family of Aotearoa New Zealand.

The tragedy that occurred in Christchurch was a despicable and cowardly act that sought to assert the supremacy of one race over others.

It was an act that sought to create fear and division. We utterly reject what the terrorist sought to impose.

We choose to respond with sympathy and compassion for our Muslim brothers and sisters, to express our solidarity with them, and to show that hate will never win and love will never fail.

We are compelled to look more closely at ourselves, individually and collectively and to acknowledge that we have allowed the rhetoric of intolerance, hatred and fear to exist among us.

We have allowed judgment of our neighbour and discrimination against our neighbour, in our history and today.

Casual racism, the rhetoric of fear, the targeting and scapegoating of individuals and groups is all too present in our society. It provides a seedbed for this kind of violent hatred.

Today we choose to renew our commitment to love our neighbour, no matter who that neighbour is. We choose peace. We choose love.

The Anglican Church in Aotearoa, New Zealand and Polynesia has received messages of support and assurance of prayer from 20 Anglican primates since the terror attack on two Christchurch mosques on Friday March 15.