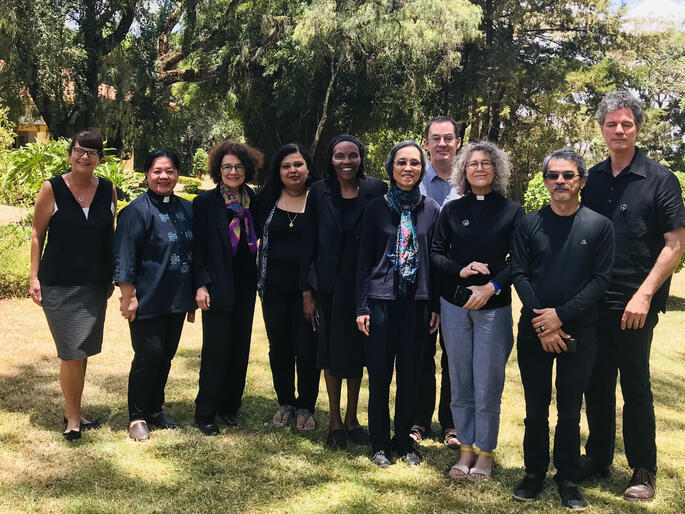 The free to download 64-page resource is entitled ‘God’s Justice: Just Relationships between Women and Men, Girls and Boys’ and is designed for use as a course component or teaching module incorporated into existing curricula or training schemes for Anglicans and Episcopalians preparing for lay or ordained ministry, or taking part in continuing ministry education.

The gender justice study materials cover theological, biblical and social definitions of gender, and zero in on the global impact of gender injustice, ranging from inequal access church leadership for women, through to gender-based violence in the context of war.

The first four of the eight study units cover: creating safe space for gender study; facilitating group dialogue on gender; biblical and social definitions of gender; outcomes of gender inequity across cultures; and gender, power and gender-based violence. The second group of four studies consider options for change toward gender justice by Anglican churches and their leaders, particularly looking at: gender inequity in the church, theological perspectives on gender justice, transformative womanhood and manhood, and transformative leadership toward gender equity which is focused through the Anglican Communion’s Marks of Mission.

To download the new study materials as a free PDF, go to the Anglican Communion’s gender justice Tools for transformation page: Women and Men working together for Gender Justice

What does the gender justice study cover?

A brief outline of some of the main points in the study follows below.

After an introduction outlining the grave consequences of gender discrimination and gender-based violence around the globe, the study resource sets out by offering ways for Anglicans to create safe and respectful spaces in which both women and men can study the Bible and unpack the shared cultural and social expectations (or personal assumptions) about gender roles, rights and abilities that can limit and damage women and girls.

It proposes the best way to learn about gender issues is a collaborative group environment, where each person taking part can contribute to the conversation and analyse the gender equity questions in their society from an equal footing.

The study materials define how gender discrimination is particularly poignant across the countries of the Communion where women and girls are the majority of people trafficked, sexually exploited or abused, those married too young or against their will, murdered in ‘honour killings’ or as babies through femicide – and in almost every place disallowed equal access to resources, leadership and decision-making in political and social processes, including within the churches.

When looking at the role of gender in each context where Anglicans live, the study materials suggests educators following Jesus’ way of teaching his disciples on the road to Emmaus.

It outlines how Jesus began his Emmaus road teaching with a shared journey, accompanied by dialogue with the world around the disciples as well as with each other. The study materials propose learners analyse the signs of the times together as the starting point for finding and living out a relevant life-transforming theology of gender justice.

“In the same way, [as Jesus taught] the gender learning process begins by walking together and sharing stories, including the personal, communal, political, ecclesial, and spiritual.” (Page 16.)

“We learn from Jesus that it is necessary to re-read scripture if we and our contexts are to be transformed. Scripture and its interpretation are vital resources as we discern God’s perspective on just relationships between women and men, girls and boys.” (Page 17.)

Biblical and social definitions of gender and culture

The third part of the study digs deep into how the cultures where Anglicans live and their biblical understandings have defined or redefined the roles, rights, responsibilities and expectations of the different genders.

“The ways in which people practice gender or reinforce expectations or taboos on one another vary not only by culture but also across history.” Pg 21.

The study picks up on differing conceptions of maleness and femaleness in the creation stories of Genesis; the theology of Job regarding his wife, sons and daughters; and the gender conversations that Jesus and portions of Paul’s writings engaged in.

“Gender can be a precious gift to help express human differences.” state the study writers.

“But when that gift becomes corrupted in such a way that differences lead to some people being more highly valued or others marginalised and excluded, it harms the ability for a community or society to make the fullest use of the many gifts and abilities in its midst.

“It also obstructs the fulfilment of God’s mission in the world.”

The study offers an insight into how the Christian church developed into a patriarchal institution that closely reflected society around it, rather than being aligned with the radical equality preached by Jesus. It quotes sociologist Max Weber who noted,

“…women’s status tends to be similar to men’s in newer religious movements among people who tend to be marginalised in society… such as the early Christian movement.”

“… as newer religious movements develop a formal organisation, including a formal leadership structure such as clergy and a scriptural canon, women’s status becomes increasingly marginalised from positions of leadership or responsibility.”

Outcomes of gender inequality across cultures

The fourth module highlights inequities placed on women and girls’ in their use of space.

It explains how women and girls in many cultures are welcome to occupy public space only under higher levels of vigilance, than that required of men (in order to avoid violence and sexual violence).

“The result is that men have access to far more public space than women, without fear of repercussions or threats of violence.”

“Over time, women’s limitation of space affects their ability to perform certain tasks or to gain the skills and experience necessary for some jobs or occupations.”

The same section enters the territory of unequal expectations of male and female church workers, clergy and leaders in the churches of the Anglican Communion, looking at disparities in expectations,  paid and unpaid work of clergy, volunteers and clergy spouses, and male-devised organisational structures that make them biased against equity for women.

A study section on gender-based and sexual violence looks at the theological and ethical challenge posed to the church of violence against women and girls: in situations ranging from violence in the confines of families and relationships, through to crimes caused by sex trafficking and rape in the context of war or sexual exploitation of migrants, refugees and displaced people.

The section also emphasizes the issues of power and male privilege as it looks at how violence against women and girls is propagated and underpinned through intimidation; emotional abuse, isolation; minimising, denying and blaming; threatening of children, and cutting women off from economic power to make choices over their lives.

The second half of the study materials look at how Anglicans can take action to transform gender inequities in the communities and churches they lead, particularly looking at gender-just theological perspectives, building up and living out models of transformative womanhood and manhood, and leadership that shifts the lens on gender towards a closer following of Jesus’ vision of equality.

The final summary of the ‘transformative action’ section offers challenges for Anglican churches and their leaders to incorporate a gender justice dimension into each of the Anglican Communion’s Marks of Mission as they are lived out in parishes, Christian communities, dioceses and provinces around the Communion – from evangelisation and nurture of new believers through to challenging unjust gender structures.