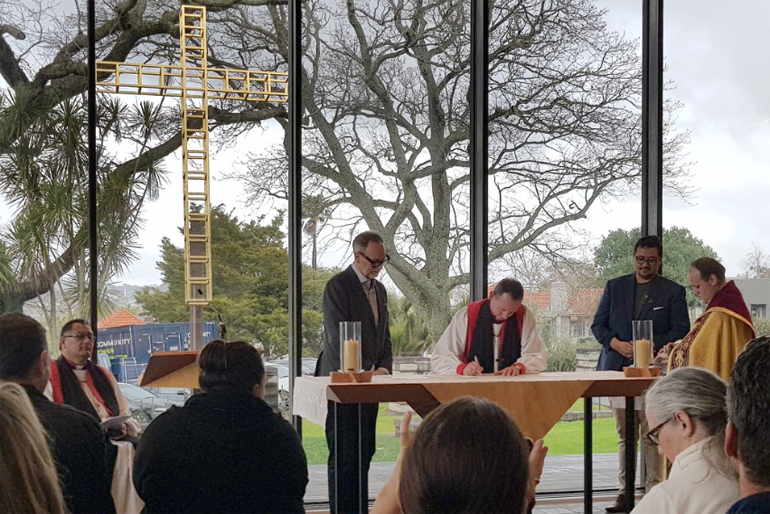 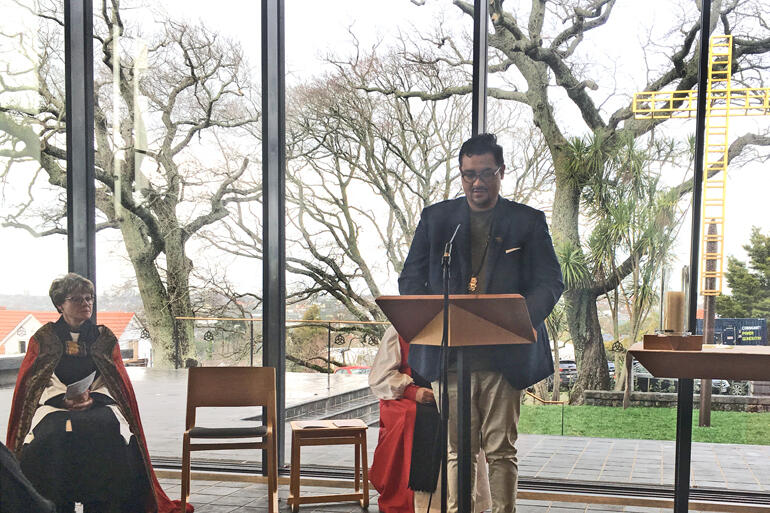 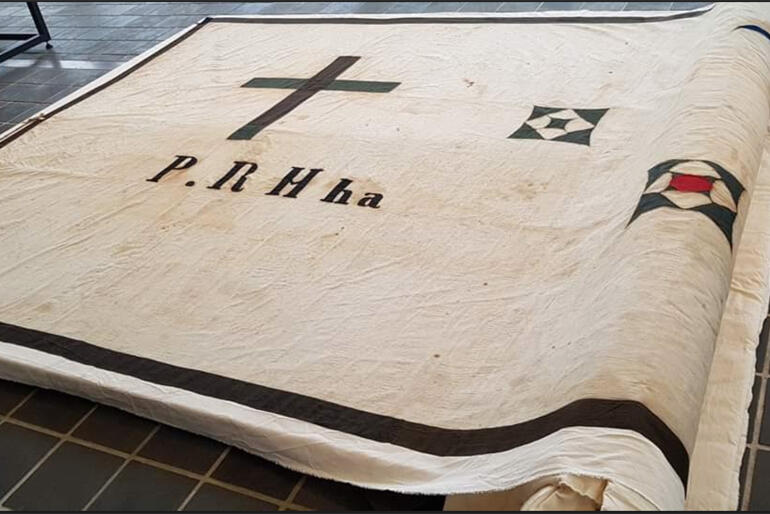 The Anglican Bishop of Auckland has returned a 160 year-old flag to its origins under the guardianship of the Kīngitanga.

On Thursday 8 August, Bishop of Auckland Ross Bay and Bishop of Tai Tokerau Te Kitohi Pikaahu presided at a service in Holy Trinity Cathedral where Bishop Ross signed care of the taonga back to the Kīngitanga, represented at the Cathedral by current monarch Kingi Tūheitia's son, Te Ariki Tamaroa Whatumoana.

The 6m x 2.4m calico flag adorned with an appliquéd black cross, a row of letters and black and red geometric designs, is believed to have been made for the first Māori King Pōtatau Te Wherowhero, and may have been used as a funerary flag or pall at Kingi Pōtatau's funeral in 1860.

The historic artefact surfaced when Auckland Museum staff were preparing ‘Te Paki o Matariki: 160 Years of Kiingitanga’ a 2018 exhibition that looked back to the crowning of King Pōtatau Te Wherowhero in 1858.

According to a story in the Nelson Mail dated 30 July 1929, the flag was removed from Aotearoa New Zealand by Rev Alfred Clementson in the 1860s who travelled with it to England. In 1929 it was inherited by his son, Rev John Clementson who took it to the New Zealand High Commissioner in London, Sir James Parr, to inquire whether the flag had “any historical interest” to Aotearoa New Zealand.

The High Commissioner organised the flag’s return, via a letter to Prime Minister Sir Joseph Ward, who then sent the flag to the Anglican primate, Archbishop Alfred Averill (who was Bishop of Auckland) as a “gift to the church in the Dominion”.

The 1929 article reported that Archbishop Alfred Averill lodged the Kīngitanga flag with Auckland Museum for safekeeping. At that time, Mr Tuhapi and Mr Whare Mahihi, who were working on reconstruction of Māori artefacts at Auckland Museum, identified the flag as a “token of mourning”, but said they could not determine whether it had been flown at the King’s tangihanga or used to robe his coffin. They also believed the letters on the flag represented the King’s name, its black cross “the Christian symbol,” and the geometric designs were whetu, or the “Māori evening star.”

At some point since 1929, knowledge of this Church's link with the flag was not passed down to subsequent Bishops of Auckland, so that Bishop Ross Bay only discovered his predecessor had placed the flag at Auckland Museum when its staff contacted him in 2018. At that stage the museum had already displayed the flag, but not before conservation staff had put 450 hours into restoring it. Museum records still classified the flag as held on behalf of the Anglican Bishop of Auckland.

"There was no doubt among any of us – Museum, Kīngitanga, Bishop – that it belongs in Ngaruawahia, from whence it came 160 years ago." said Bishop Ross at the event held to return the flag last week.

"That is about kaitiakitanga – rightful guardianship – things in their right place and right order – contributing to the oranga of the community." he said.

"Today as you return the ownership of this flag to us, the office of the Bishop of Auckland becomes embedded in the life of the Kīngitanga." he said.

"This flag and all its stories will forever be told and handed down to each generation by our people. Included now in this story will be the actions that took place today."

The flag will be officially received at Turangawaewae Marae in Ngaruawahia later this week at a ceremony on Thursday 15 August, the Kīngitanga day of remembrance in honour of the late Queen Te Atairangikaahu.