Confirmation – only for the retired?

Confirmation ought to be about mature faith and therefore reserved for the newly retired, argues a canon theologian in the Church Times. 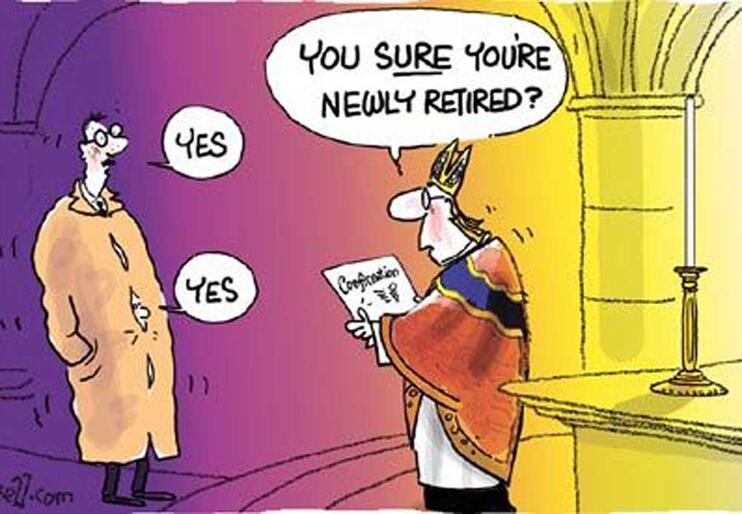 Confirmation ought to be about mature faith: it should be reserved for the newly retired, argues Andrew Shanks

Our present practice is a celebration of conformity

Sometimes, even what seems most self-evident needs challenging. It seems self-evident to almost all Anglicans that, given our practice of infant baptism, we need another follow-up initiation service, chiefly intended for children who have reached the age of reason. Yet I would argue that this is a grievous theological error. I believe that one of the first signs of the imminent re-arrival of the Kingdom of God would be the spectacle of churches abandoning their current practice of confirmation.

The practice of infant baptism is meant to say something theologically. It is a symbolic affirmation that the Church is a community open to all — and, in particular, that membership requires absolutely no educational qualifications.

There is an important polemical point being made here about the nature of theological truth. God’s truth is not simply a form of correctness, to which the articulate have privileged access by virtue of their education. But it is also a fundamental humbling of us articulate people, a lifting up of the less advantaged — even infants who have no language at all.

Here is the first objection to our current practice of confirmation, inasmuch as we make admission to communion conditional on being confirmed. Surely the eucharist ought, also, to be saying the same as infant baptism does.

When we exclude some of the baptised from communion, it damages the symbolic integrity of the eucharist. It seems symbolically to deny the inner equality of all souls before God, regardless of education. Thus, I would argue, the symbolism of confirmation, as now practised, actually undermines the vital symbolic truth of infant baptism.

One might protest, however, that if we just baptised babies, admitted them to communion, and left it at that, we would be sanctioning mere folk religion. Therefore we need to have some balancing rite, in order also to affirm our commitment to think ing faith through, owning it, and entering into it as a genuine, life-transforming discipline of wisdom.

I could not agree more. Only, in that case, why schoolchildren? Surely, if what we are looking for is a symbolic affirmation of the proper interplay between faith and wisdom — that is, the wisdom that comes from experience of life — we ought to be celebrating the faith of people with more experience to work with.

The sort of wisdom that fulfils faith is that which comes from a serious awareness of one’s own mortality. Currently, however — in the ritual that is meant to affirm and interpret the need for a truly personal appropriation of faith — the people whose faith we celebrate are, for the most part, precisely those least likely to have a vivid sense of their own mortality. In this way, again, the symbolism of confirmation, as practised at present, appears to deny the proper link between faith and wisdom.

All too often, of course, confirmation is treated not so much as a rite of entry into the church community, but more as a moment of graduation out of it. I propose we take this as a gentle hint.

In my idea of an ecclesiastical utopia, bishops would be busy laying hands not on schoolchildren, but, instead, on the newly retired, in a rite of commissioning. That is what would constitute a truly serious context for the reaffirmation of baptismal vows.

It is far better to go with the grain of human nature. Of all groups, it is the newly retired who are the most likely to want to commit themselves in a deeper way to church life. This is, at least in part, because of how they have grown in faith-fulfilling wisdom. We ought unashamedly to celebrate that. It may be counter-cultural to do so, in a world obsessed with the glories of glamorous youth. But then the best liturgy always is counter-cultural.

We take it for granted that confirmation should be for schoolchildren. I suggest that this is a left-over reflex from the bad old days when religion was supposed to be all about law and order. We wait until children are old enough to have learnt obedience, and then we think they are ready.

Our present practice of confirmation is a symbolic celebration of conformity, a coming-of-age ritual in the sense of an initiation into the adult ways of the tribe. Only insofar as it is that does it make sense as a rite for this age group. Yet such a celebration of tribal religious conformity is not really a celebration of faith. In Pauline terms, it is a celebration of “justification by works of law”, in Christian form.

The Church of England was obliged to break away from Rome to be an agency of law and order in the service of tyranny. But the great true discovery of secular modernity is that there is no need for religion to maintain law and order. The promises of capitalism, backed up by an efficient police, can do the job perfectly well, without any assistance from religion.

In principle, this is a great liberation for the Church. Now, at last, we can set aside our usual preoccupation with justification by works of law, and concentrate on faith itself, in the true sense, as a matrix for mature free-spirited wisdom.

Alas, though, our current practice of confirmation vividly demonstrates our persistent failure to enter into the new opportunities that could be opened up.

The Revd Dr Andrew Shanks is Canon Theologian at Manchester Cathedral, and the author of The Other Calling (Blackwell, 2007).

From the Revd Dr Vrej Nersessian

A world missionary conference in Edinburgh in 1910 gathered 414 delegates from 122 denominations and 43 countries to initiate a process by which Christian Churches that had been separated moved towards co-operation and unity, by mutual understanding and respect, through dialogue. In 1948, 147 Protestant, Anglican, and Orthodox Churches formed the World Council of Churches.

While the WCC works towards healing the old wounds, the Anglican Church is creating new divisions, over such matters as the ordination of women, same-sex marriage, and women bishops — and now, it seems, abandoning the confirmation of the young (Canon Dr Andrew Shanks, Comment, 2 November).

Baptism is to “bring the infant from the state of catechumen to baptism” (immersion into water) followed by chrismation, which gives the baptised “the honour of adoption unto Christ”, i.e the moment when a person enters the Church as a member of the body of Christ, and finally the right of the baptised to recite the Nicene Creed and receive holy communion.

The three stages are interconnected; for, as the prayer states, “(Name), servant of Christ, coming from the state of catechumen to baptism and from baptism to worship, now worships before this holy altar, this holy sanctuary, and the holy font; for he has put off iniquity and has put on the light of the knowledge of God” (The Order of Baptism in the Armenian Apostolic Orthodox Church). Without these three elements, the rite is invalid.

As a priest, I often have to confirm Anglicans who marry into Armenian families and who, while they may have been baptised, have not been confirmed. No sacrament can be administered if the person involved has not been fully accepted into the body of the Church.

Similarly, we often have to provide letters for headteachers of Roman Catholic schools confirming that an Armenian child has been baptised and has taken communion, and hence should not be obliged to partake in “first communion”.

Anglicans have, in recent years, taken unilateral decisions on almost all the sacraments, even though the second Anglican/Orthodox Forum held at St Bishoy, Wadi El Natrun (12-18 March 1990), discussed the need to promote greater harmony among the Churches.