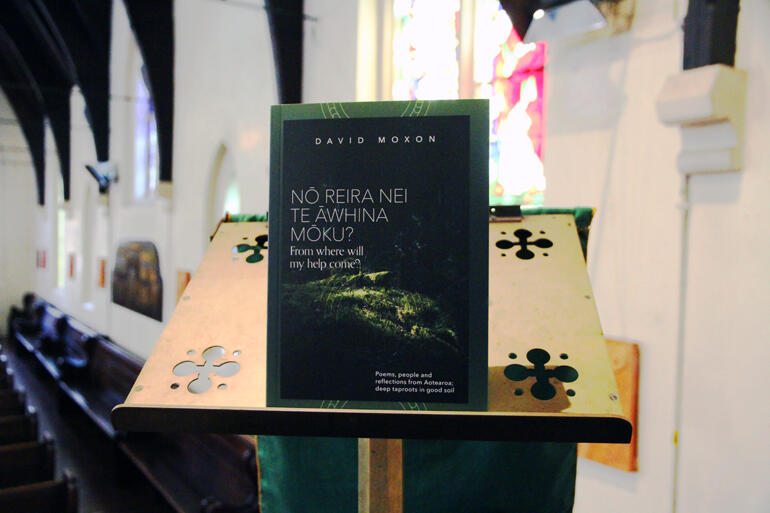 Archbishop David Moxon has published a new book looking to local heroes of faith whose mission and ministry built connection and relationship between the peoples of Aotearoa New Zealand. Here the Rev Ben Ong looks into the text and its stories, beginning first in te reo Māori and then offering his review in English.

Archbishop Sir David Moxon has released a new book for our time and context, entitled ‘Nō reira nei te āwhina mōku: From where will my help come? Poems, people and reflections from Aotearoa; deep taproots in good soil’.

Produced by Huia Publishers, Archbishop David Moxon’s book highlights Māori and Pākehā exemplars of faith who reached out to serve and relate to people beyond their own cultural contexts.

Archbishop David explains that he chose these people for their stories of reaching out to their cultural neighbours and becoming friends,

“The mutual association… made much more of their own hearts and minds.” …”They can encourage us to strive as they did and not to give up.” he writes.

Archbishop David’s writing in this volume reflects his verbal storytelling style, making his book captivating and encouraging as well as easy to read.

The book comprises twelve people of faith whose stories include significant connections between Māori and Pākehā ranging from today back to the gospel's landing in Aotearoa. David Moxon also includes a few poems ( “Aotearoa,” The whole earth, our garden home,” and “Grace, Justice, Peace”) alongside a number of his own reflections.

In one section, the author delves into the story of Te Arikinui Te Atairangikaahu, particularly her role as a Waikato-Tainui monarch who faithfully followed the gospel and sought to bring all peoples together in unity.

Another chapter turns to missionaries Mary Ann and James Preece, who diligently shared the gospel with people in Ahikererū, Whakatāne and Coromandel and who learned how to live interdependently with these communities along the way.

The chapter on Hēni Te Kirikaramu (Ngāti Uenuku-Kōpako, Ngāti Hinepare) tells of her courageous choice to care for her enemies – on the same battlefield where she, her whānau and iwi were defending their pā from imperial forces.

An entry on Archbishop Sir Paul Reeves brings the collection into the late 20th Century and has been strengthened by contributions from several Reeves family members.

Sir Paul Reeves' chapter chronicles his spiritual awakening and his call to priestly ministry, and highlights his contributions to justice and peace and service to Māori, the Church, academia and secular society.

One page 152, we find a small taste of Paul Reeves’ own advice on how to live attentively to God’s call amidst the pressures of life,

“The picture of our Lord in the gospels is not one of an incredibly busy person. But rather someone who sought to do the right thing at the right moment, who had an order of priorities, who was alive to those special moments among the time that passed.” wrote Sir Paul in a letter to his clergy.

Each of the stories in this book provides a new hagiographic taproot here – by focusing attention on these twelve holy women and men whose stories of faith and faithful actions are all grounded in the whenua of Aotearoa New Zealand.

The book itself is well designed and laid out, and the colour illustrations add to its high production value.

Nō reira nei te āwhina mōku: From where will my help come? constitutes a valuable resource for anyone who wishes to study the journey of Māori and Pākehā in the Church, and offers a rich insight into the wider history of Christianity in Te Ika-a-Māui. It is available in paperback from Huia Books for $45.