The Royal Commission of Inquiry into Abuse in Care has concluded two sessions of hearings on abuse redress processes in faith-based institutions in Aotearoa New Zealand. 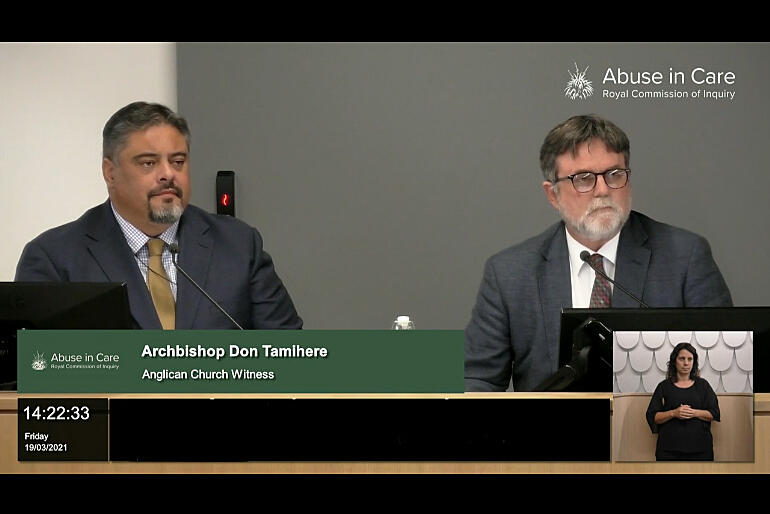 These hearings included survivor’s accounts of their experience of church redress processes and church leaders’ statements on past and present approaches to redress.

On 22 March, the Primates of the Anglican Church in Aotearoa, New Zealand and Polynesia Archbishop Philip Richardson, Archbishop Don Tamihere and Archbishop Fereimi Cama offered an apology from the Church to those abused while in the care of the Church and its affiliated institutions.

The Archbishops also provided an update on recent changes to disciplinary canons, spoke on matters of tikanga and recommitted to assist the Commission in its work.

After the hearings had finished, the Archbishops reiterated their support for survivors of abuse to come forward to the Royal Commission and share their testimony.

“It’s important that the Commission hears the truth of what has happened, that people are held accountable, and most importantly that survivors are able to seek redress and progress their own healing.”

The Archbishops reported that being before the Royal Commission during the Faith-based Redress Hearings was challenging.

“But making ourselves available and accountable on behalf of the Church was a small burden to bear when compared to what survivors have had to go through to have their testimonies heard.”

“The experience has reinforced to us just how crucial it is that the Church takes survivor testimony seriously.”

The Archbishops emphasised the need for the Church to seek to provide the care and redress that survivors need, and make every effort to ensure that the Church is a safe and accountable place.

They also thanked the survivors for their work and all others who had contributed to the work of the Royal Commission.

“We acknowledge the care and commitment of the Commissioners and their team, and the courage of the survivors who have come forward.”

The Archbishops also acknowledged the care and dignity with which Bishop Ross Bay and Bishop Peter Carrell represented the Church during the hearings and thanked the Church’s legal and administrative team.

“Our representative team of Fiona Guy Kidd, Jeremy Johnson, and India Shores, supported by Bruce Gray and our General Secretary Michael Hughes, have worked tirelessly to ensure that the Church is being transparent, open and accountable during these hearings.”

At their joint hearing the Archbishops also spoke to Archbishop Philip Richardson’s 19 March witness statement, which outlines the history and unique three-tikanga structure of the Anglican Church and discusses in detail the disciplinary processes of the Church over time. It also addresses some of the issues the Church confronts when it comes to redress and the nature of ordination and liability.

Bishop of Auckland Bishop Ross Bay presented evidence in hearings on 17 and 18 March.  In his evidence Bishop Ross apologises to survivors. He sets out some history of the Diocese of Auckland, the processes for dealing with complaints and claims of abuse and the relationship between the Diocese and various schools and trust boards.  Bishop Ross also addresses estimated claims and outcomes from Church processes.

Bishop of Christchurch Bishop Peter Carrell presented evidence at a hearing on 18 March. Bishop Peter’s written statement includes an apology to survivors and outlines some history of the diocese and relationships between the diocese, schools and trust boards. He details procedures for dealing with complaints and claims of abuse as well as how the Church works to educate clergy on issues of safety.

Full video recordings and brief summaries of all of the faith-based redress hearings can be accessed through the Royal Commission of Inquiry website here: Faith-based Redress hearing - Phase 2

If you have experienced abuse in a faith-based institution such as a church or religious school between 1950-1999 or have information that may help the investigation of the Royal Commission into Abuse in Care, please call them on 0800 222 727 or email solicitorassisting@abuseincare.org.nz

All complaints about any alleged misconduct or unsatisfactory conduct by an ordained minister, licensed person, or office holder are now received and handled by the Registrar of the Ministry Standards Commission, who can be confidentially contacted at: registrar@anglicanchurch.org.nz

More information on complaints processes in the Anglican Church in Aotearoa, New Zealand and Polynesia can be found here: https://www.anglican.org.nz/Complaints