Ahead of the 2021 United Nations’ Climate Change Conference (COP26), Aotearoa New Zealand’s religious communities have appealed to the New Zealand Government to take the strongest possible stance to mitigate the climate crisis. 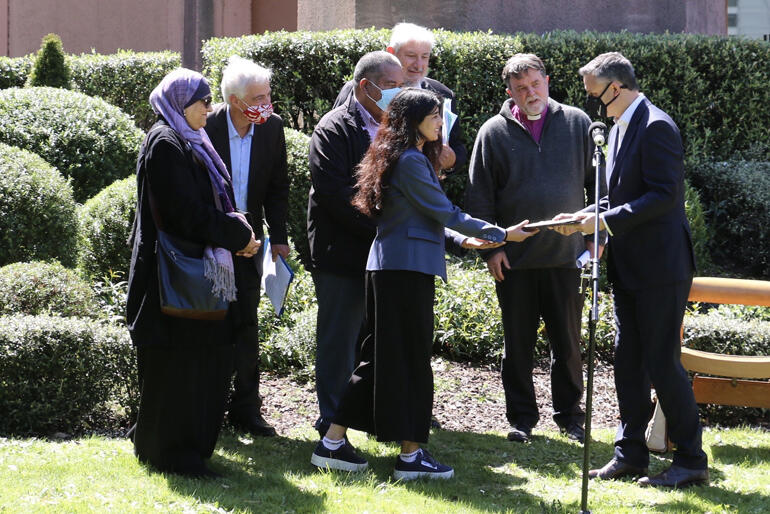 The religious leaders’ statement was presented to the Minister as he heads to the COP26 United Nations’ Climate Change Conference taking place in Glasgow, Scotland over the two weeks from 31 October – 12 November.

The religious leaders’ statement names the global climate crisis and its impact on atmospheric conditions, ecosystems and humanity as the greatest moral and spiritual challenge humanity has yet faced.

The religious signatories to the statement, which represent Buddhist, Baha’i, Muslim, Hindu, Sikh, Jewish and Christian communities and interfaith groups across Aotearoa New Zealand, backed their call to action with the religious bases for sustainable living that are embedded in both matauranga Māori and the spiritual traditions they represent,

“Key to religious teaching is the understanding that sustainable and harmonious relationships between all of humanity and nature is not merely an abstract ideal, but rather a comprehensive guide for living justly and walking gently upon the earth.”

“We acknowledge respectfully that through the teachings of traditional karakia the natural world is understood to be of sacred importance; that through the invocation of whakapapa comes the understanding that everything and everyone within Te Ao Whānui is interconnected and that through the shared responsibility of kaitiakitanga we accept that it is the duty of all humankind to care for the oceans and the earth and all who dwell therein.”

The statement goes on to acknowledge that a widespread failure to heed either indigenous wisdom or religious and scientific warnings about human damage to ecosystems has led the world to the current climate crisis.

The religious leaders presented the ‘Statement for Government on the Nationally Determined Contribution to the Paris Agreement from Religious Leaders and Interfaith Groups’ last Tuesday 19 October at a ceremony held in the grounds of Wellington’s Anglican Cathedral of St Paul overlooking the New Zealand Parliament Buildings.

The religious leaders’ statement was supported by the leaders of the Religious Diversity Centre, which organised an expert drafting group to enable religious communities to speak with a unified voice on the need for urgent climate damage mitigating action.

The statement draws attention to faith communities’ work on sustainable living practices and initiatives to reduce carbon emissions and puts forward a number of recommendations urging the Government to take effective action, at the same time ensuring a just transition supported by appropriate public education.

The statement takes care to highlight the need to support workers and industries that will be unequally disadvantaged by any transition to a lower emissions and green energy economy.

Religious leaders have called on to Government to fund Māori tikanga-led initiatives and to prioritise financial backing to create a pathway into low-carbon solutions for people working in agricultural, energy and transport sectors.

Prof Paul Morris of the Religious Diversity Centre led the remainder of the programme which began with Dr Paul Blaschke offering a brief outline of the statement before different religious community representatives spoke on its significance for them.

Archbishop Philip Richardson spoke on behalf of the Anglican Church in Aotearoa, New Zealand and Polynesia, reminding those gathered that as stewards of whenua and moana we cannot wait to make changes that will mitigate human-induced climate damage, but must take action now.

Rehanna Ali from the Muslim community spoke of the need to see Creation as a place of worship and to seek to restore balance and harmony in our lives in a spirit of hope. Next, Mandira Shailaj from the Hindu Youth Council urged youth leaders to work hard to save the planet, not only for the next generation but particularly on behalf of those countries without the resources to cope with the devastation caused by climate change.

Sunlou Liuvaie from Palmerston North’s Interfaith Council emphasised the present-day reality of climate change that requires a present-day response. He pointed to the trauma of Pacific peoples whose lives have been shattered due to climate-change caused extreme weather events such as cyclone and flooding.

“Those least responsible for causing climate change are bearing the brunt of the damage caused by it.” Mr Liuvaie said.

Hon James Shaw began his response to the religious leaders’ presentation by saying he had a sense of being “filled with the spirit of life,” and reiterated the Government’s support for Pacific nations in their work to mitigate the impact of climate crisis on their lands and communities.

Minister Shaw went on to thank the religious community leaders for the way such a diverse group had come together to comprehensively address the issue of climate change.

“I am tremendously grateful for the work that you all do in your individual faith communities.”

The Minister concluded with a request to religious communities to make sure to contact their local MPs and alert them to the urgency of their concerns and pledged to take those concerns expressed in the Statement with him to COP26 in Glasgow next week.