Anglicans speak out on euthanasia

With just one week left for submissions to the Justice Select Committee on David Seymour's End of Life Choice Bill, Anglicans have spoken out on the Bill, with the majority opposed. 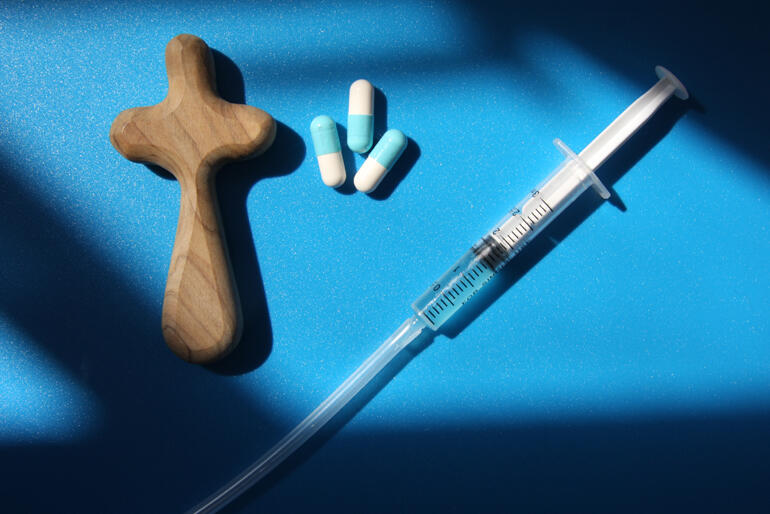 Eight Anglican bishops have called for a halt to the End of Life Choice Bill, which proposes legalising medically-assisted suicide and euthanasia in Aotearoa New Zealand.

In their submission to the Justice Select Committee on David Seymour's End of Life Choice Bill this week, the bishops recommended no change to existing laws, and called for more funding of palliative care and counselling support for patients and their whanau.

Rather than introducing assisted dying as proposed in the Bill, the bishops believe our government should ensure New Zealanders have access to the best quality palliative and psycho-social care when faced with terminal illness.

They cite Australian doctor Karen Hitchcock who in her 12 years of work in large public hospitals has often heard patients express a wish to die, but says the cause of that desire is seldom physical pain,

"[It] is often because of despair, loneliness, grief, the feeling of worthlessness, meaninglessness or being a burden. I have never seen a patient whose physical suffering was untreatable,” she said.

The bishops also point out that many legal care options enable medical staff to assist dying people: such as pain relieving drugs, sedation, and for those in a coma, withdrawal of artificial life support.

One bishop's view from the bedside

Bishop Steven Benford has administered pain medication to the dying on many occasions while serving in his medical vocation as an anaesthetics specialist.

"As doctors we often administer pain medication for a terminally ill patient – in the pretty sure expectation it could shorten their life," he says.

"But the matter of intention makes a big difference. When I administered pain medication to a person near death, even though I knew my action may risk hastening death, my intention was not to cause death, but to ease that person's suffering.

"It would be very different to know that at the end of that needle in my hand was a substance that guaranteed the person in front of me would be dead in 15 minutes.

"That would change my intention from improving their quality of life to actively causing death.

"That is not a role I think many doctors would choose."

Where are Māori views in this debate?

The eight bishops1 question the mono-cultural character of public conversation on assisted dying, noting Māori voices have been under-represented. They ask whether the law should go ahead without adequate attention to the Treaty principle of Māori input into laws that affect whanau and iwi.

This week Te Hui Amorangi ki te Upoko o te Ika added their voice against the Bill, drawing on discussions at a hui at Otaki this month.

The Upoko submission explains why so little comment has come from Māori in response to the assisted dying debate, saying individual death choice comes from a Pakeha perspective that has been forced into the Māori political sphere,

"Having the ‘choice’ to end one’s life, and the principle of ‘individual rights,’ come from a Western perspective and focus on the individual and not on whanau," the submitters say.

The submission details how whanau prioritise caring for their loved one.

"This time is a special time of being able to be present and to show love to a whanau member, and a time for all whanau and loved ones to say goodbye. This is a natural part of life to offer love and support, prayers and the appropriate processes to farewell a loved one.

"It is important for whanau to be present with the dying family member throughout this period of transition and final farewell."

The hui at Otaki agreed the impact of a choice to die would go even further than whanau and iwi.

"As whanau, we are also answerable to our Atua, our Tupuna, and our people for any decisions we make that impact on all those we whakapapa to."

The Hui Amorangi ki Te Upoko o Te Ika submission has concluded that there should be no change to the existing laws on end of life matters.

The bishops point out that the Bill is inaccurate in claims that overseas assisted dying laws have proven secure from legal challenge. They cite evidence from Belgium and the Netherlands, where an average of 5000 assisted deaths take place a year. Both countries demonstrate that assisted dying laws have extended criteria to cover non-terminal conditions such as dementia and mental illness, and in Belgium, the initial age limit protecting children has been removed.

Many of the concerns raised by the eight diocesan bishops opposing the Bill are shared in a submission from the InterChurch Bioethics Council (ICBC) – an ecumenical, cross-cultural body of scientific, medical and bioethics experts supported by the Anglican, Methodist and Presbyterian Churches of Aotearoa New Zealand.

He believes assisted dying describes the medical care that every patient in this country is already legally entitled to.

"But the Bill proposes two specific actions causing death: assisted suicide (giving medical support to help a person to take their own life) and euthanasia (where medical professionals administer an intervention to end a person's life).

The InterChurch Bioethics councillors also question the wisdom of creating an acceptable, legal form of suicide for some citizens, while trying to counteract high suicide rates in Aotearoa New Zealand.

"Do we want to say to our young people that sometimes suicide is acceptable, that some pain is unbearable and justifies taking your own life?"

According to the ICBC the Bill also introduces a new category to healthcare, that fundamentally changes the relationship of trust between doctor and patient.

"Once medicine views killing as a legally permissible part of healthcare, the door is open to challenge the boundaries as to how far that should go." says Graham O'Brien.

The ICBC also note that 'unbearable suffering' is an unclear and subjective category that over time will enable extension of criteria for assisted suicide and euthanasia into grey areas.

Assistant Bishop of Auckland Jim White has taken a different stand and made a submission in support of the End of Life Choice Bill, which is co-signed by retired bishops John Bluck and David Coles. They affirm their starting point as "affirming the dignity and autonomy of every individual."

"We believe that for some individuals with a terminal illness, assisted dying can be a good and moral choice and that we should offer medically competent assistance in carrying out such a choice," they write.

The three bishops who support the Bill do so with the same caution expressed by the InterChurch Bioethics Council,

"Assistance in dying needs to be confined to those with a terminal illness..." they write.

"We do not support the additional ground of “unbearable suffering” and believe that would lead us into a tangle of self-defined exemptions and dangerous precedents."

The Anglican Media Office understands six submissions from leaders of this Church have opposed the End of Life Choice Bill, including an additional submission from Bishop Victoria Matthews and Bishop Steven Benford, and one has been lodged in support.

Further submissions to the Justice Select Committee on the End of Life Choice Bill can be made online up till 6 March 2018.