St Matthew-in-the-City unveils its Easter billboard: a Facebook photo of the Crucifixion, “liked” by Judas Iscariot. 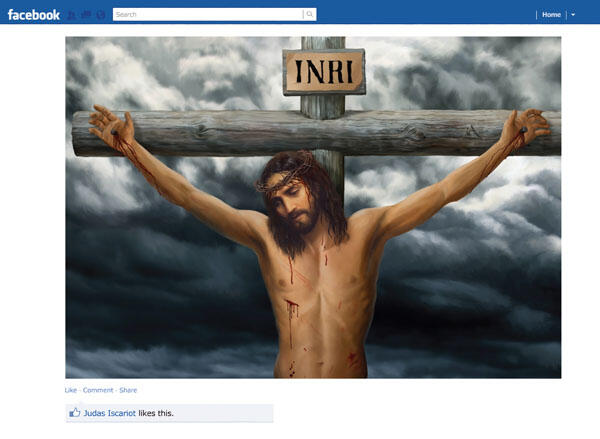 St Matthew-in-the-City has unveiled its Easter billboard: a Facebook photo of the Crucifixion, “liked” by Judas Iscariot.

Vicar Glynn Cardy says the image “uses humour to laugh at and critique our ongoing desire to apportion blame” and hopes to make people realise that Easter is about moving forward, not allocating blame.

“The message of Easter is that blame, guilt, and regret will not lead to a happy, contented life,” he says.

“The way forward is by caring for one another… and building an inclusive community in which everyone is valued.”

The church has become well known for its controversial billboards, including one last year portraying Mary holding a positive pregnancy test.

In explaining the billboard, Mr Cardy says Jesus’ death caused his followers to blame each other and themselves, and Judas was particularly vilified across the ages – symptomatic of the human desire to hold someone responsible for tragic events.

“Jesus did not die for our sins. He died because he peeved a bunch of powerful people off,” he says.

“He lived and preached a message of radical inclusion that threatened the status quo [and] the authorities killed him for it.

“The ‘dying for sins’ business was a spin the church applied at a later date.”