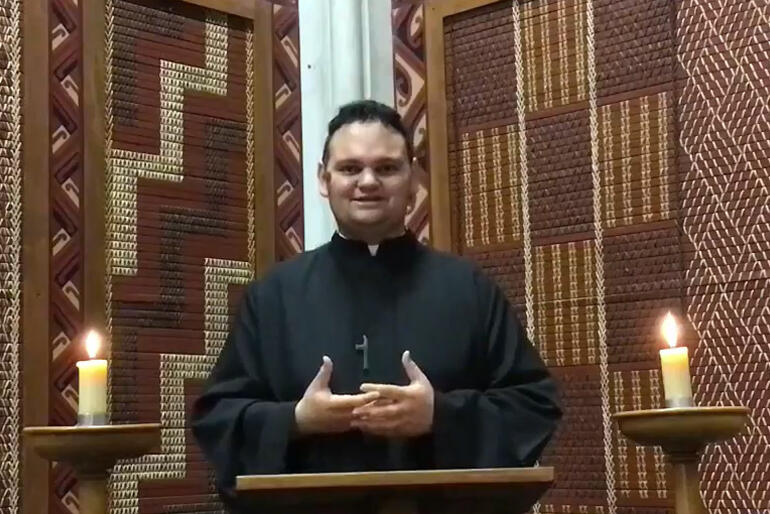 Let us pray: Almighty God we are surrounded by your great cloud of witnesses, as we begin our journey through this Lent, may we be encouraged by the witness of your servant Rēnata Kawepō.

During the New Zealand wars he was strongly opposed to Pai Marire activity in the Hawke’s Bay and actively supported the Government throughout the 19th century.

He was a formidable warrior and took part in a number of military campaigns against the Hauhau [Pai Marire forces] occupations and Te Kooti.

Rēnata was greatly distinguished throughout these numerous military campaigns as a formidable warrior in battle. He was always there defending his people.

By 1880, after the deaths of several other Kahungungu Rangatira [chiefs of the Ngāti Kahungungu people] – Te Moananui, Tarihai and Tokomoana – Rēnata Kawepō was acknowledged as the last of the paramount chiefs of Heretaunga (the area covering Hawke’s Bay, Pātea and the upper Rangitikei).

At his birth Rēnata Kawepō was given the name “Tama-ki-Hikurangi,”[Son of Hikurangi] a powerful name depicting not ony his high and noble birth, but also his connections to the heavens and to ‘the beyond’.

His mother Te Pakapaka was a daughter of one of the greatest paramount chiefs of my people of Te Ūpokoiri, she was daughter of Te Uamairangi, and the younger sister of Tūhotoariki, principal chiefs of Ngāi Te Ūpokoiri of Heretaunga.

However when Tama-ki-Hikurangi was 17 years old, a war party came down and invaded Te Ūpokoiri Ngāti Hinemanu. Tama-ki-Hikurangi Kawepō was captured in that invasion and nearly didn’t survive. In fact, not long after his capture he was hung over a fire ready to be roasted and eaten.

However his life was spared when his brother Tiakitai sent his brother Tatere to intervene for Kawepō, who was taken off the fire and was instead turned over to [northern tribe] Ngāpuhi allies of his captors as a slave.

Rēnata then spent ten years a slave, being taken around many places in the North Island by his captors before being taken back to Ngāpuhi rohe in the Bay of Islands in around 1837, where he lived in Waimate North for several years.

At this time (thank goodness) many of the Northland chiefs were being converted to Christianity. Before their baptism and before their conversion to Christianity, they were strongly urged to release their slaves.

So it was that after many, many years as a slave Rēnata was finally freed.

After many years enslaved in a foreign people’s land, he was given freedom.

Of course, at this time many of the slaves had attended the same baptismal classes as their captors and they were also converted to Christianity. It is often said in Ngāti Kahungungu that Rēnata resisted conversion to Christianity at first, but eventually converted after an all-night wānanga[training session] on whakapono[faith] and mihinaretanga[Anglicanism] with an old Māori missioner.

After his baptism, Tama-ki-Hikurangi took on the baptismal name of Rēnata. He stayed on in Waimate North and attended St John’s College, studying theology and mihinaretanga. After graduating he travelled with Bishop George Selwyn to carry out a mission to people throughout the North island.

That was a massive mission that took over a year. They travelled and preached and taught about the faith in over sixty different places and many different iwi.

Then Rēnata helped set up more Māori missions and he was joined by other Māori missioners and with Rev William Colenso they went down to his own land, down there in Ngahurere where they set up a mission station.

Also during that time, he was able to unite his people of Ngāi Te Ūpokoiri who were scattered across the central North Island. He united them and brought them all together again – and of course we all eventually settled back at Ōmāhu.

Rēnata was a strong character and a strong man. At one time he was known as a “leg-break wrestler,” but he gave this up not long after his baptism, because it didn’t fit well with his Christian principles.

And he was a resourceful leader with a magnificent talent for diplomacy in all situations – and that was especially important as he went around the different iwi on his Christian missions.

He was also a man who was full of honour, who saw that honour and dignity were integral components of his life.

And he was progressive, he always looked at what he could do for the flourishing of his people. He looked for what opportunities he could develop, and he always brought them back to his own people so that they could all flourish and begin this new way of life.

He was deeply Christian, and he believed that forgiveness, hope and love would set us all free.

That is why Rēnata built that church down there at St John’s Ōmāhu, where our whānau are tuning in from and singing from this evening. And he also built the Ōmāhu school and provided funding for Te Aute College (Anglican Māori Boys’ Boarding High School) because he worked for anything that he considered would allow his people to flourish.

Anything that would bring prosperity to his people and to the entire area and to te iwi Māori he supported and he funded many things out of his own pocket, because of his faith that moved him to ensure that his people would flourish.

He built bridges, he built roads, he gave out kai(food) to the multitude, he gave sheep in order for his people to create an economy, he built a flour mill and he sold the flour to the townspeople and much much more.

When Rēnata Kawepō passed away in 1888, some 6,000 people attended his funeral which was a full military funeral.

During his life Rēnata Kawepō turned down many honours, such as entering parliament – he turned down a seat on the Legislative Council – and he turned down the rank of captain in the military.

That was because he saw that being a paramount chief of his people – a servant of his people – was all the status he needed. It was sufficient for him to be an ariki, to be one who served his people.

Rēnata Kawepō might have died in 1888, but his legacy did not end there.

Here is the chalice and paten that the people of the church he built at St John’s Ōmāhu dedicated to the memory of their tipuna Rēnata Kawepō.

And we use these to celebrate our most sacred feast of the Eucharist in Te Hāhi Mihinare [Māori Anglican Church].

Today Rēnata Kawepō teaches us to ensure that we live our lives to ensure the flourishing of those around us.

To ensure that we live our lives for the flourishing of those generations yet to come.

That we live our lives to build and to develop things which we can’t yet see around us now, but in faith we know are coming in the future.

May we be nourished and filled up with the faith, just like Rēnata Kawepō, may we eat and drink of the body and blood of Christ and be fuelled for our mission of developing ways in which our people can flourish and can feel this love and this hope we feel.

And we can set up wonderful things like the church in Ōmāhu which Rēnata Kawepō built and still stands there today as a spiritual centre for his people. Things like the schools which he supported, like the wonderful infrastructure he built for his community.

Despite of course being a paramount chief, an ariki, Rēnata spent all those years as a slave to Ngāpuhi in a foreign land, then he converted to Christianity and then turned to going out and sharing this love which had set him free, this love which had touched his heart.

May we too join with Rēnata and reflect on his life in this Lenten season, as we lead up into Holy week, because there’s a lot we can learn from this saint.

Ultimately I think the main message for us all today is to be able to set up things in our future that may bless and enable those around us.

Once again back to this chalice and paten which has nourished and fed and spiritually sustained the people of Ōmāhu since Rēnata’s time.

These taonga, which were given to me [into my keeping] at my ordination also went over to World War I with Rev Peni Te Uamairangi Hakiwai (who is my tipuna), so in the battle it was able to sustain our people as they sought peace.

And then again in World War II this chalice and paten was also used to serve the Eucharist to the members of the Māori battalion when they were at the front line, that time it was taken over by the Rev Canon Wi Te Tau Huata.

Rēnata Kawepō was an amazing man and he also had some good quotes. One of my favourite whakatauki[Māori proverbs] is a whakatauki from Rēnata Kawepō, which says:

“May the church, may the faith, be the nourishing and lifegiving garden,

that not only nourishes you, not only sustains you, but keeps you going throughout your journey.”

Rēnata was trying to teach us something.

So may this faith of ours, this faith in Jesus, this faith in God be the thing which sustains us. Not only in Ōmāhu, or in Kahungungu, but in every iwi, just like in the days when Rēnata went to preach everywhere the good news.