Sensing God’s presence in every realm

Max Whitaker chronicles a pathway in his journey towards faith whose twists and turns have landed him in otherworldly places of beauty, solitude and wonder. 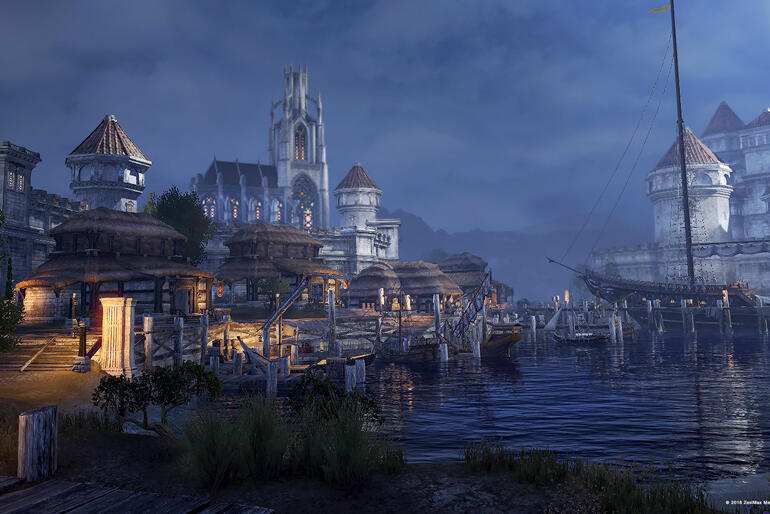 Though now I am a priest in the Anglican Church, this is not where my journey began.

Looking back, perhaps it first set out when I was a small boy in the town square of Skara Brae.

Skara Brae is an ancient city with stone buildings leaning over little cobbled alley ways.  The town square is one of the few places where you can look up and really see the sky.

It is most memorable for the tiny identical churches which line all four sides.  As a child, I wandered into one of these little churches to be confronted in the dimly lit interior by a grey hooded monk offering healing.  That image of healing and peace amongst the hustle, bustle and danger stuck with me for many years.

Later, when I moved to Sosaria, I encountered pilgrims moving from shrine to shrine seeking to cultivate virtues of honesty, humility, justice, sacrifice and compassion. Once again, I could sense the connection with this monk’s offer of healing, even if I did not fully understand it yet.  There was something mystical and peaceful there too.

Many years later I ended up on the tropical Island of Besaid, and experienced a similar tranquillity in the local temple whose cool interior was filled with haunting choral music and statues of saints.  Just to stand there and absorb the atmosphere was life changing in some way.  Whenever I hear the hymn that choir was singing, I am back there, and at peace.

The grand transcendent architecture in the temple in Vivic, in the volcanic and barren landscape of north east Tamriel, could not have been further from the simplicity of Besaid, but it too captivated me, and helped my imagination soar.

All of these places offered something numinous and otherworldly. Perhaps God was speaking to me in the teachings I overheard, in the music, in the statues and icons, and the startling architecture.

There is nothing unusual in any of this of course. Many people have been moved by similar experiences, and found God as they travelled the world and explored other cultures.

Perhaps the only surprising thing then, is that none of these places exist.

At least not in the conventional sense.

Am I serious then, when I say that God spoke to me as I entered these imaginary worlds?

It is little surprise to catch hints of the divine in a great art work, or a masterpiece novel, or a classical symphony, or in the architecture of a cathedral… but to say the same about a video game would strike many as absurd.

Videogames have only recently become the subject of serious academic study: but then it’s not long since people scoffed at the thought of film studies, or doing a PhD on a television show.

But along with movies and TV, video games are the art and literature of an upcoming generation.  Most will never go to the ballet, or to the theatre… but many will wander through those same imaginary landscapes I have.

What is it that moves people to ask the questions that lead them to God?  Do great art and architecture cause us marvel to at how such beauty could exist?

Is it haunting, uplifting, or poignant music which pulls our heart to places we never knew existed?  Is it the reminder that there is something beyond ourselves, which leads us to search for meaning and ask how we should live our lives?

At times I have found all of these in gaming. From the early 1980s, when I played The Bard’s Tale on an Apple II, through to the Elder Scrolls on a PS4.

Of course 1980s computer game graphics and sound were very simplistic, but the conceptual ideas of the works created in that era made up for it.

These were not games which won by just by shooting and killing, (which regrettably is a popular genre) but by solving problems, exploring and making decisions, even ethical ones.

In Ultima IV for example, it was impossible to complete the game without cultivating virtues of humility, sacrifice and justice.

I was challenged as a child to consider what these virtues meant – through a game. What it meant to live by this code was as real to me as the challenge of any sermon.

In more modern games the emphasis has moved onto spectacular graphics and sound, and it is here that the architect of imaginary spaces, and the composer could begin to speak. Or is it that God begins to speak through them?

Like it or not, computer games are the literature for many people growing up and growing old in the 21st century.  This is what fires their imaginations, engages their emotions, and it is where questions about the meaning of life begin to percolate.

It should be no surprise then that God can speak through this genre.  There is no place in existence where God does not speak.  All art works and human creativity have the potential to point towards the divine.

Yet people are suspicious of the newest innovation: be it comic books, electric guitars, or video games.  Remember when organs in churches were looked on with great suspicion?

If you are a gamer yourself, you probably know what I am talking about.  If you are not, then next time you see gamers on their couch, surrounded by empty pizza boxes, ask yourself… could God be speaking to them through that screen and that soundtrack?

The Rev Dr Max Whitaker works as an Anglican priest and chaplain in Dunedin.

NB: Skara Brae is a ruined Neolithic village in Scotland, but this is not the one I visited.