Guts and Grace in Christchurch 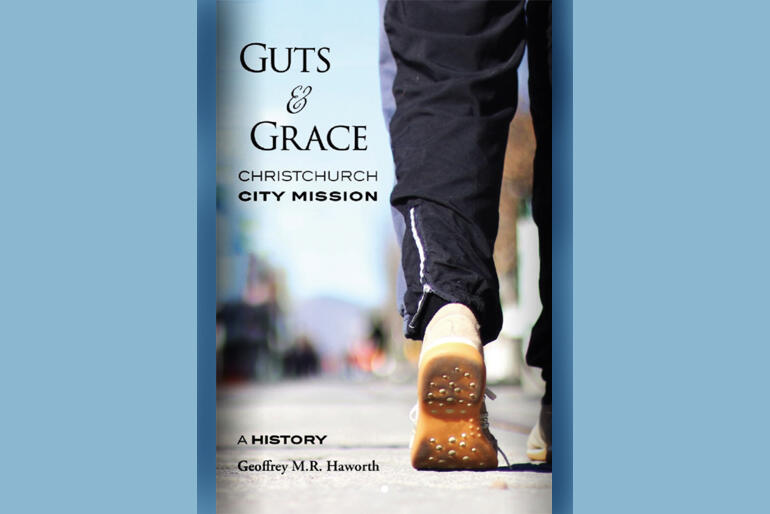 Christchurch City Mission celebrated its 90th anniversary in July 2020 with the launch of its first published history, entitled “Guts and Grace”. The new book by Rev Dr Geoff Haworth was launched by Bishop Peter Carrell at the Transitional Cathedral on the site of St John’s Latimer Square, which for some years was known as the “mission church”.

The last of New Zealand’s Anglican-based city missions to be founded, the Christchurch City Mission began its life in the schoolroom of St Luke’s, Manchester Street, where a team of volunteers organised by the City Evangelist Rev Percy Revell provided lunch for unemployed men.

With the Great Depression settling in, many workers were already out of employment and experiencing acute levels of desperation. Within three months, the City Mission was under way in its own home, a house rented in Salisbury Street. It was named St Martin’s House of Help, after St Martin, the saint who gave half of his cloak to a beggar.

At the most perilous economic time in New Zealand’s history, the Christchurch City Mission was able to build its own headquarters, and buy a two-storeyed house at 199 Antigua Street to serve as the Guest House – a temporary home for homeless men. Percy Revell became the city missioner from the organisation’s beginning until he retired in 1947.

“Guts and Grace” traces the City Mission’s development, as wartime virtually removed the country’s unemployment, and the Guest House was used as a hostel for men about to sign up for the armed forces. In the 1950s, an era began in which the City Mission was under the guidance of the Anglican lay evangelical society the Church Army, who provided a number of its city missioners.

Under Rev Maurice Goodall, the Mission moved to 275 Hereford Street, where they built a new headquarters building, and greatly expanded the staff. It also set up an innovative development home for struggling young men at Mt Grey Downs, outside Rangiora.

The expansion of staff and services continued under the leadership of Rev David Morrell, who helped to pioneer such new services as the Caravan in the Square, Thorpe House, and the chapel.

For some years, the City Mission had a very close relationship with St John’s Latimer Square with two city missioners becoming vicars of that parish. Under its vicar, David Thorpe, St John’s allowed homeless men to sleep on its pews until the City Mission set up a Night Shelter.

Until about twenty years ago, the City Mission provided numerous services for the city’s young people, including accommodation, social workers, the Caravan in the Square, and new year family camps.

More recently, its services have been geared towards the needs of older people, young families, and the increasing number of employed people who are paid wages too low to make ends meet without support in financial planning, accommodation and counselling.

The Mission's headquarters building at 275 Hereford Street proved too small and cramped, so under city missioner Michael Gorman, plans were made to build across the road. As the site was being prepared, and immediately after the agreement was signed with the builder, the February 2011 earthquake struck.

It severely affected the operations of the Mission and forced it to relocate – briefly as it turned out – to Riccarton. The need for its services went through the roof – almost literally.It successfully changed and adapted its services, and was a major provider of social services to thousands of people whose lives were impacted by the region’s seismic upheavals.

“Guts and Grace” shows how a Christian social service organisation became a highly-respected and successful force for good in the story of Christchurch over its first 90 years.

The book is available from the Christchurch City Mission, the Transitional Cathedral, and the office of All Souls Merivale. It is published by Wily Publications, and costs $34.95.