Bishop Justin Duckworth emerges from his cell to celebrate the Eucharist and talk further about penal reform.
• Watch Bishop Justin talk about his experience
• Earlier story: 'We can do better' 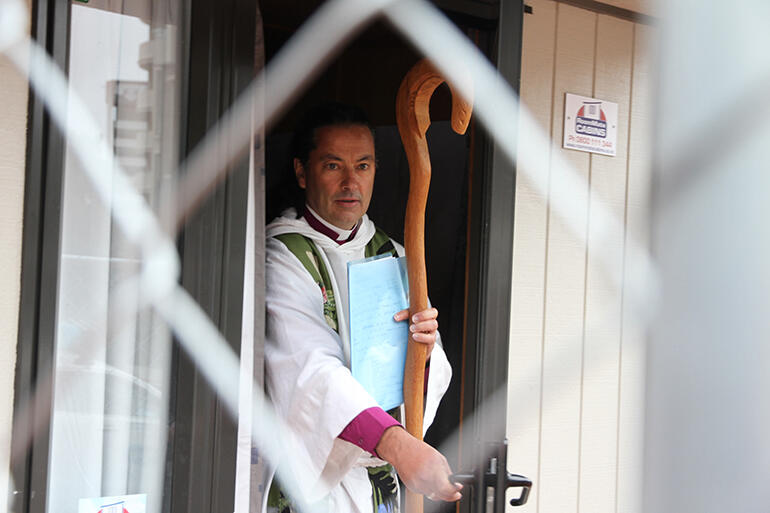 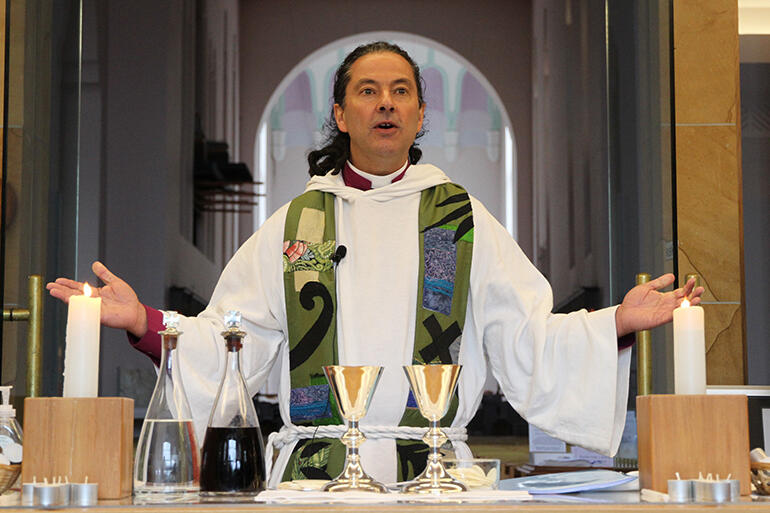 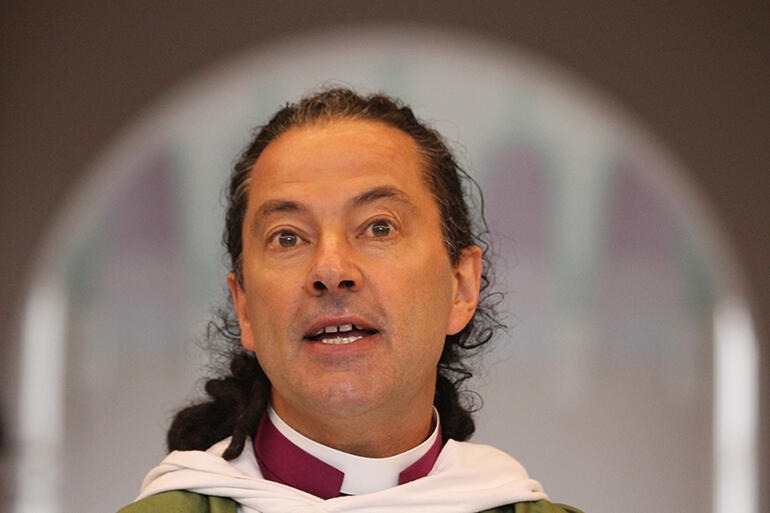 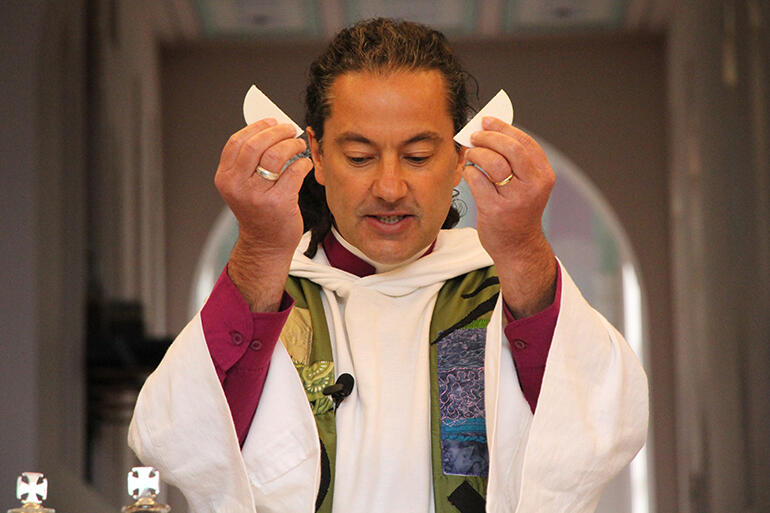 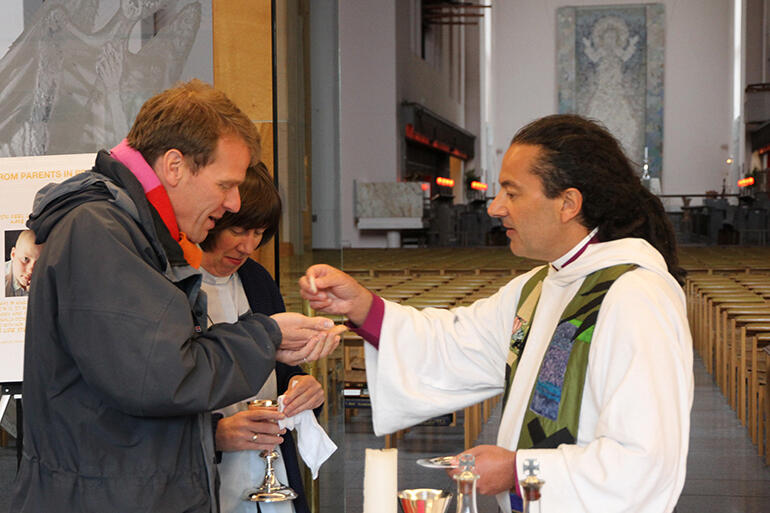 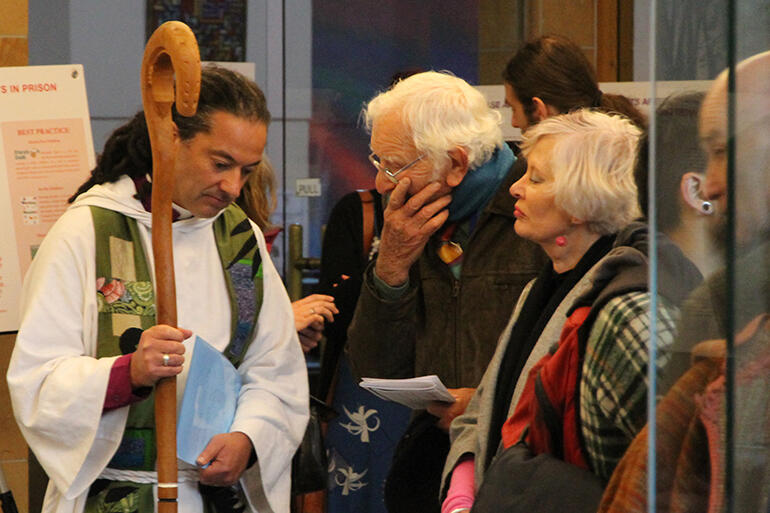 Bishop Justin Duckworth emerged briefly from his cell on the steps of Wellington Cathedral today to conduct a midday Eucharist, and to talk further about the need for penal reform.

If things had gone to plan, that Eucharist would have been held on the forecourt, immediately outside his cell.

But Wellington’s wild weather today forced a change of plans – and about 60 people gathered with the barefoot bishop to celebrate in the foyer of the cathedral.

He reported that his vigil had started well – though his maths, he feared, was suspect.

He’s set himself to pray for every cell in every prison, every prisoner – all 8500 of them – and the victims of crimes that those prisoners have committed. All to be done by the time he emerges, next Sunday morning.

“I toted up yesterday, and I’d gone through a thousand. I felt pretty good about that – until I did the maths. And realised that I’m not going to make it at this rate.

“But what stands out to me so far in this journey is this:

“We are talking about real people.

And the reality, he said, is that our penal system often doesn’t work for people.

“For many who are incarcerated, it is not the best approach to stop them reoffending.

“For the majority of people, it’s actually a training camp for further offending.

“Only in a small percentage of cases does getting tough on crime actually work to mean that we have fewer victims.”

To achieve that, Bishop Justin said, our society needs to get serious with issues such as prisoner reintegration and the treatment of prisoners who have alcohol and drug addictions or mental health issues. We also need to focus on the underlying causes of crime.

But he stressed that neither he nor the Anglican Church was interested in pointing the finger and blaming anybody.

“What we are saying is we can take some responsibility for this.

“We can do better as a church.

“We can recognise that across our society – and especially across our church – we can work for reform in education, health, housing and employment.

“Because we know that this will ultimately diminish the offending in our society.

“On a personal note, I was with a group of Anglican clergy recently, and we got talking about penal reform.

“One of my colleagues dropped into the conversation – and I don’t know if his stats are correct – but he said: ‘You know, probably 80 percent of crime is alcohol-related.’

“And he said that if the Anglican Church is really serious about turning this crime around, we would look at our own culture – at alcohol consumption within our church.

“What was unfortunate was that, as he was saying this, I had a bottle of beer in my hand.

“It does start with me. And it starts with us as a church.

“We can do things about our alcohol and drug culture in this country.

“We do not need to wait, and sit, and say: ‘it’s somebody else’s responsibility’.

“We can do this ourselves.”

One day down, six to go.